“We’ve never seen so much seismic activity!” The Fagradalsfjall mountain in Iceland approaches almost 50,000 earthquakes since late February as tons of Sulfur Dioxide is being released into the atmosphere: Philippines colossus Taal volcano on the verge of eruption 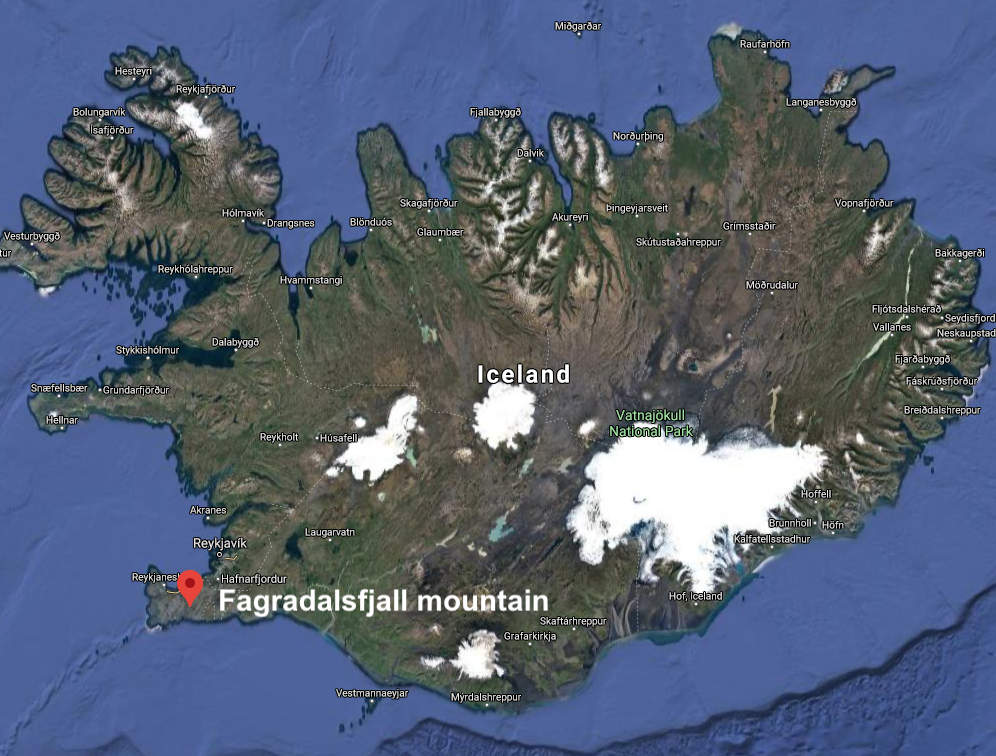 Credit Google Maps
As the Fagradalsfjall mountain area in Iceland approaches a total of almost 50,000 earthquakes since late February the question right now is not if, but when will the the source of the past weeks’ earthquakes, a large body of molten rock, known as magma, moving roughly one kilometre (0.6 mile) beneath the peninsula,will push its way to the surface? Many of the quakes clocked in at magnitudes as high as 5.7. 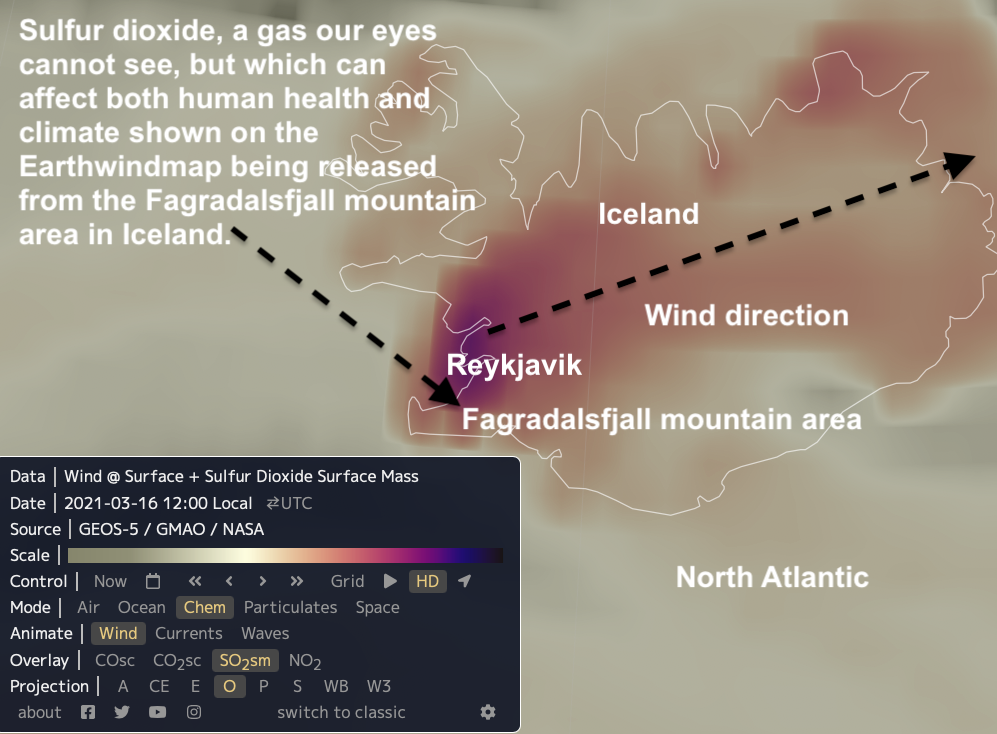 Earthwindmap showing Sulfur Dioxide being released into the atmosphere across Iceland

COPENHAGEN (Reuters) - Icelanders are yearning for some undisturbed shut-eye after tremors from tens of thousands of earthquakes have rattled their sleep for weeks in what scientists call an unprecedented seismic event, which might well end in a spectacular volcanic eruption. 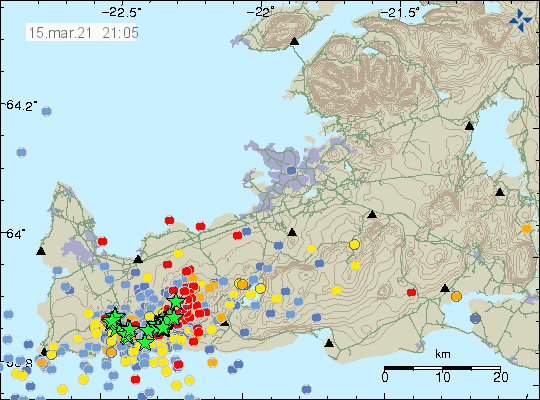 Earthquake activity in Fagradalsfjall mountain and nearby area. Copyright of this image belongs to Icelandic Met Office.
“At the moment we’re feeling it constantly. It’s like you’re walking over a fragile suspension bridge,” Rannveig Gudmundsdottir, a lifelong resident in the town of Grindavik, told Reuters. Grindavik lies in the southern part of the Reykjanes Peninsula, a volcanic and seismic hot spot, where more than 40,000 earthquakes have occurred since Feb. 24, exceeding the total number of earthquakes registered there last year.
Located between the Eurasian and the North American tectonic plates, Iceland frequently experiences earthquakes as the plates slowly drift in opposite directions at a pace of around 2 centimetres each year. The source of the past weeks’ earthquakes is a large body of molten rock, known as magma, moving roughly one kilometre (0.6 mile) beneath the peninsula, as it tries to push its way to the surface. “We’ve never seen so much seismic activity,” Sara Barsotti, volcanic hazards coordinator at the Icelandic Meteorological Office (IMO) told Reuters. Some of those quakes clocked in at magnitudes as high as 5.7. “Everyone here is so tired,” Gudmundsdottir, a 5th grade school teacher, said. “When I go to bed at night, all I think about is: Am I going to get any sleep tonight?”
TAAL VOLCANO, PHILIPPINES BULLETIN 16 March 2021 08:00 A.M. 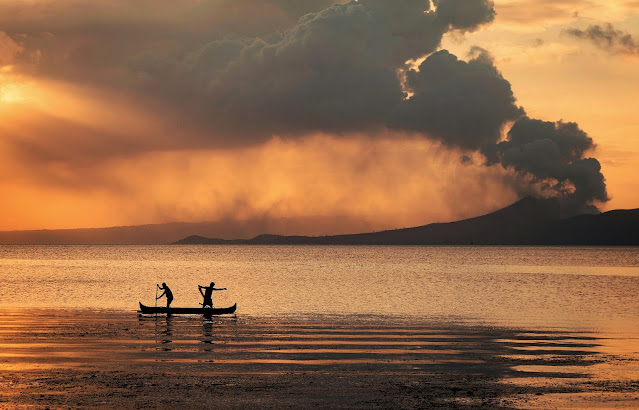 Fishing on Taal lake on January 14, 2020, in imminent danger of further eruptions Michael Angelo Luna - Own work
In the past 24-hour period, the Taal Volcano Network, recorded forty-two (42) volcanic earthquakes, including thirty-four (34) episodes of volcanic tremor having durations of one (1) to eight (8) minutes and one (1) hybrid event. Activity at the Main Crater consisted of weak emission of steam-laden plumes from fumarolic vents that rose 5 meters high. Sulfur dioxide (SO2) emission that averaged 1216 tonnes/day was measured yesterday, 15 March 2021. Temperature highs of 71.8°C and pH of 1.59 were last measured from the Main Crater Lake respectively on 04 March and 12 February 2021. Ground deformation parameters from electronic tilt, continuous GPS and InSAR data analysis indicated a very slow and steady inflation and expansion of the Taal region since after the January 2020 eruption.
These parameters may indicate increased magmatic activity at shallow depths beneath the edifice. Alert Level 2 (Increased Unrest) is maintained over Taal Volcano. DOST-PHIVOLCS reminds the public that at Alert Level 2, sudden steam-driven or phreatic explosions, volcanic earthquakes, minor ashfall, and lethal accumulations or expulsions of volcanic gas can occur and threaten areas within the Taal Volcano Island (TVI). DOST-PHIVOLCS strongly recommends that entry into TVI, Taal’s Permanent Danger Zone or PDZ, especially the vicinities of the Main Crater and the Daang Kastila fissure, must remain strictly prohibited. Local government units are advised to continuously assess and strengthen the preparedness of previously evacuated barangays around Taal Lake in case of renewed unrest. Civil aviation authorities must advise pilots to avoid flying close to the volcano as airborne ash and ballistic fragments from sudden explosions and wind-remobilized ash may pose hazards to aircraft. DOST-PHIVOLCS is closely monitoring Taal Volcano’s activity and any new significant development will be immediately communicated to all stakeholders.
Major Quakes
Volcano Eruptions 2021