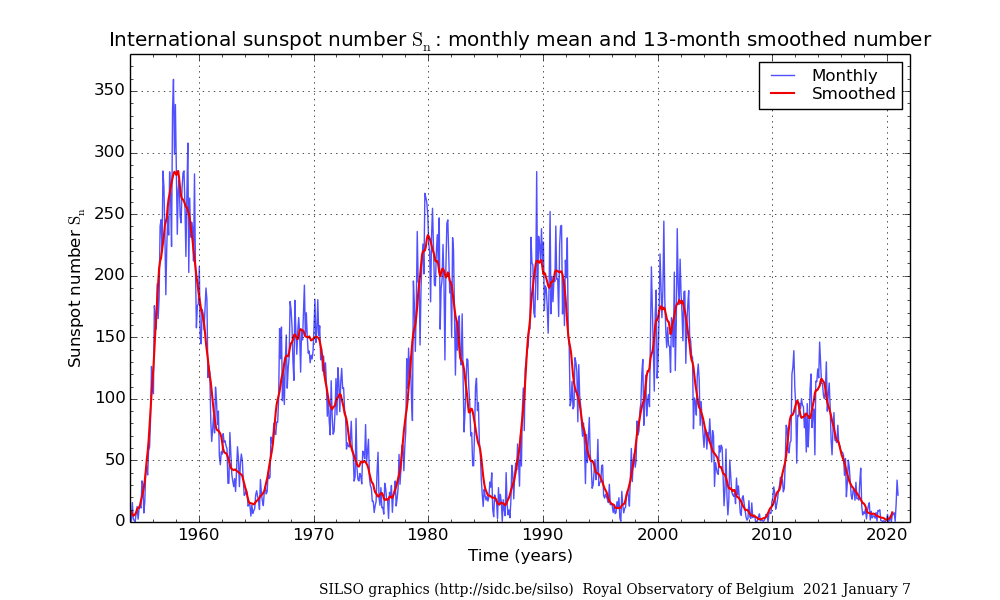 In 1957 our star produced by far the largest number of sunspots ever recorded in one year, no other year has ever come close, however, something else happened in 1957, our planet suddenly and unexpectedly produces the record total of major quakes, mag 6 or higher when a total of 204 were recorded.
“There will be great earthquakes in one place” Matthew 24.

Something incredible happens in the 50s

Incredibly, something else coincided with the mass testing of nuclear bombs in the 50s, not realised at that time and not mentioned even now, surprisingly enough. During the Second World War, major earthquakes, (magnitude 6 or higher) began to dwindle to just 29 in the whole year of 1947, the lowest yearly total since the 27 recorded way back in 1921.

However, in 1950, major quakes (mag 6 or higher) suddenly more than quadrupled from 29 in the year of 1947 to an incredible 138 in 1950. In 1951 the number jumped again to 151. In 1952 the number spiked again to 181, building up to an incredible peak in 1957 when an astonishing 204 major quakes, mag 6 or higher were recorded. As to whether this increase in major earthquake activity was contributed to nuclear testing we will never know. However, we can attain our sun may have contributed to the quakes.

On our planet something else was happening, something which coincided perfectly with the massive increase in major quakes and nuclear bomb testing and what happened on our sun: slowly but surely our planet began warming. Other strange anomalies also began happening around the same time such as an increase in natural disasters, and volcano activity began to increase just as the major quakes. 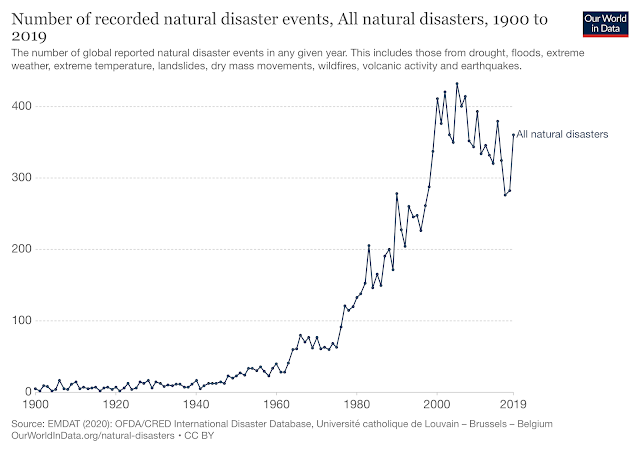 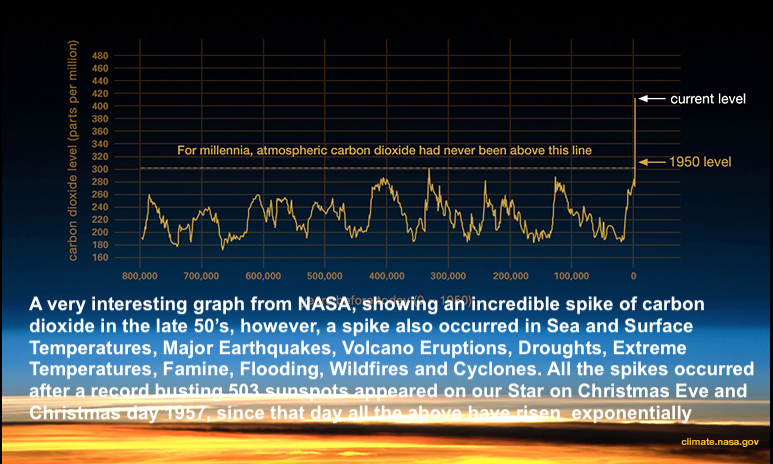 Is the spike in carbon dioxide due to the space race or nuclear testing? 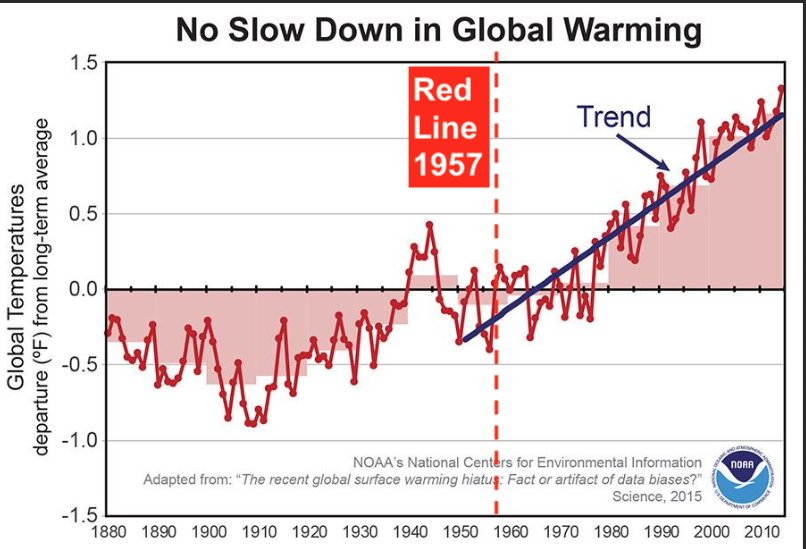 Is warming down to technology, rockets and nuclear testing and nothing to do with Greenhouse gasses?

See the graph below for the sudden rise in major quakes in the 50s. Click on image to enlarge. 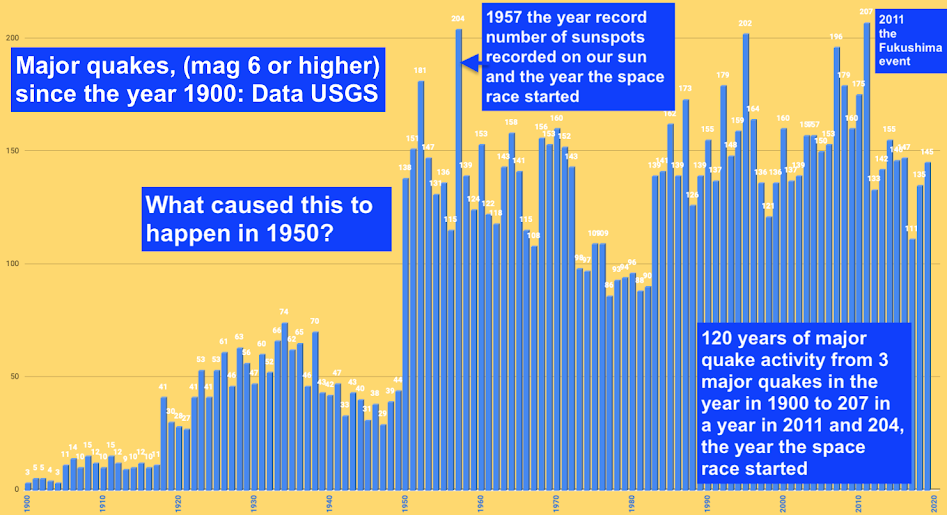 That record number of 204 major quakes, mag 6 or higher stood until 2011 when 207 major quakes were recorded, the most ever in a one year period but just 3 more than 1957, however, 1957 and 2011 throw up some absolute staggering coincidences. On closer inspection, we see both years had clusters of fore and aftershocks see below. 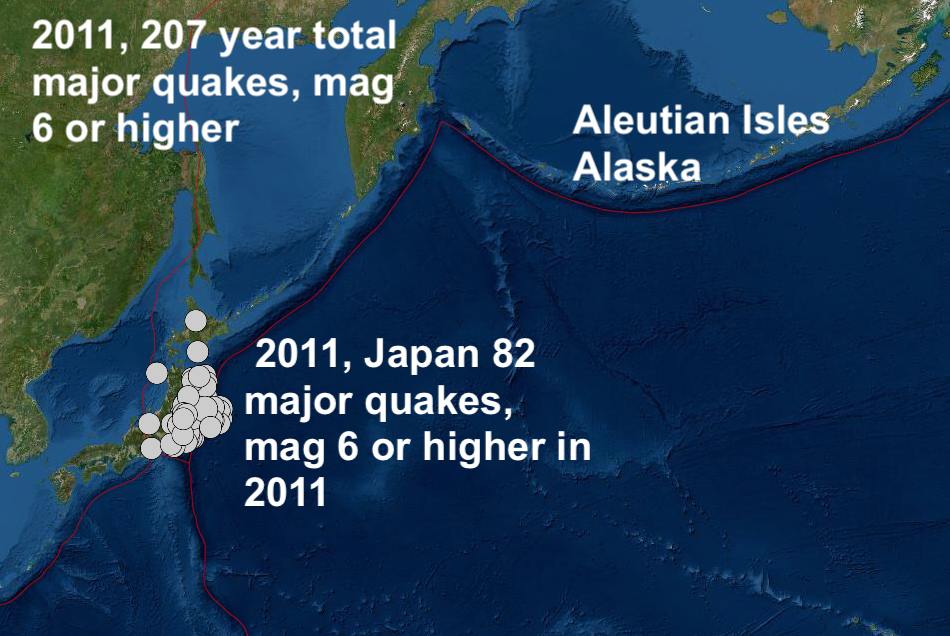 Above a cluster of major quakes, mag 6 or higher occurred in 2011. The Great Eastcoast Japan quake of March 11 recorded a 9.1 quake which was preceded by 81 fore and aftershocks, see above. 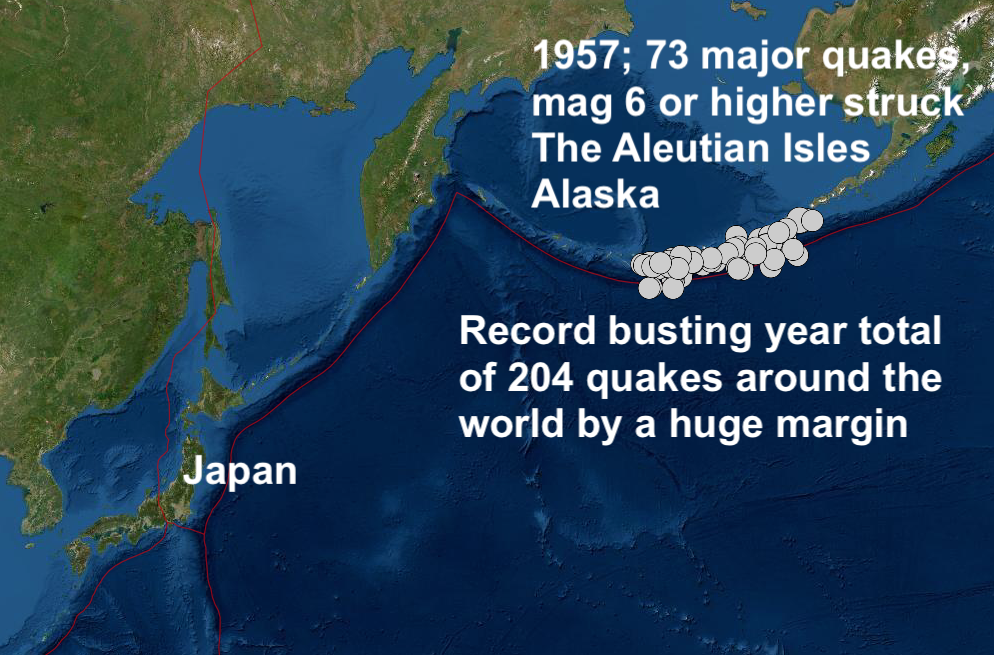 In 1957 we see a similar picture of 2011 another cluster of major quakes, mag 6 or higher along the Aleutian Islands of Alaska. Here we can clearly see another cluster of fore and aftershocks with the main quake being a massive 8.7, just .4 less than the 9.1 Japanese quake but there are some more similarities which will blow your mind.
Both clusters started in March, the magnitude 8.6 Great Aleutian Alaskan quake, had the biggest of that cluster rumbled on March the 9th 1957 and was very shallow at 25 km, the shallow quakes cause the most damage it also generated surface and tsunami waves and was the 4th biggest of the 20th century.