A mass stranding on the Chatham Islands, New Zealand has resulted in the deaths of more than 120 whales: Solar storms may trigger sperm whale strandings: On Sunday the day of the beachings, our magnetosphere was enduring stormy conditions from powerful solar winds ejected from a coronal hole on our sun. 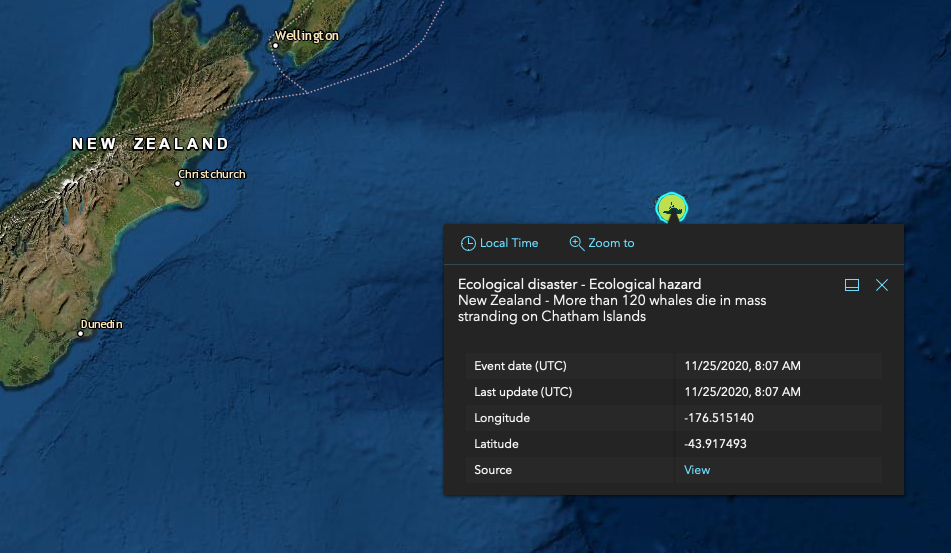 The Chatham Islands is part of New Zealand but lies 800km to the east, delaying the mission to rescue the animals. The DoC said the mass-stranding occurred on a "remote beach" over the weekend and it was alerted to the event on Sunday. DOC biodiversity ranger Jemma Welch said due to the remote location and a power outage making it difficult to contact people, it was 3pm by the time rangers arrived at the scene at Waitangi West Beach.

The islands - home to just more than 600 people - are known as a whale stranding "hotspot", with the largest ever stranding in New Zealand's history recorded on its beaches in 1918. Welch said in a statement the remaining whales "were euthanised due to the rough sea conditions and almost certainty of there being great white sharks in the water which are brought in by a stranding like this".

Sam Wild is a diver and photographer on the Chathams and first heard of the stranding when authorities told all local divers to get out of the water, due to the heightened risk from visiting great white sharks. He took pictures of the dead whales and described the scene as "very sad" and "emotional". Hokotehi Moriori Trust and Ngti Mutunga o Wharekauri Iwi Trust joined DoC staff and local people to perform a blessing of the beach on Monday and to honour the spirit of the whales, which will be left to decompose naturally.

According to DoC, mass strandings are reasonably common on the Chatham Islands with up to 1,000 animals dying in a single stranding in 1918 - the largest on record in New Zealand waters. Concrete information on why whales strand remains elusive, but sickness, navigational error, geographical features, a rapidly falling tide, being chased by a predator, or extreme weather are all thought to contribute, according to DoC.

Climate change is to blame too, scientists believe, with warming ocean temperatures moving whales' prey closer to the shore and forcing them to pursue their food into shallow waters. On average more than 300 dolphins and whales strand on New Zealand beaches each year. According to local Indigenous tribes, whale strandings are becoming bigger and more complex, with more deaths occurring.

The report by the International Journal of Astrobiology claims large solar storms, may have played a role in the strandings of 29 sperm whales in the North Sea early in 2016.The study says these geomagnetic disruptions may have confused the whales' ability to navigate, diverting them into the shallow waters. On Sunday the day of the beachings, our magnetosphere was enduring stormy conditions from powerful solar winds ejected from a coronal hole on our sun.