Floods in Bor Town, Jonglei, South Sudan, August 2020. Photo: UNHCR / Komma Godfrey
Nearly six million people have been affected by flooding this year in East Africa. Data from the UN’s Office for the Coordination of Humanitarian Affairs said 1.5 million people have been displaced by the floods. The number of people affected has increased more than five-fold in four years. The number has gone up from 1.1 million in 2016 to nearly six million so far this year.
There are fears that the situation will worsen when the peak of the short rains in November to hit most countries in the region. Parts of the region are recording the heaviest rains in a century. In 2019, a big temperature differential between the east and west sides of the Indian Ocean was blamed for heavy rainfall.
In Sudan, 860,000 people have had their homes destroyed whilst more than 120 have died. In neighbouring South Sudan, 800,000 people have been affected and 368,000 people forced from their homes. “Entire communities have fled to higher ground to escape the rising waters,” the UN said in a statement. In Ethiopia, 1.1 million people have been affected by flooding. Floods have also submerged communities in Djibouti, Kenya, Rwanda, Somalia, Tanzania and Uganda. Africa Feed
To make matters worse millions more have been suffering from unprecedented desert locust swarms which have destroyed massive amounts of crops this year in East Africa. 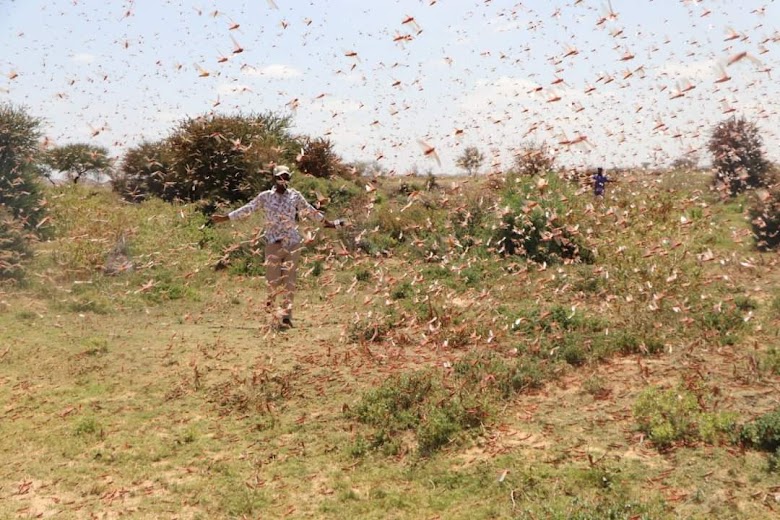 A Somalian farmer tries in vain to move the locusts from his crops, credit, fao
Swarm breeding in northeast Africa and Yemen
Even though the ground and aerial control operations continue against swarms in the Horn of Africa and Yemen, the situation remains worrisome and could potentially deteriorate during October because of recent breeding. Substantial hatching and hopper band formation has caused numerous immature swarms to form in northeast Ethiopia.
Hopper bands and swarms continue to form in Yemen where some swarms have started to move to the southern and eastern coast of Africa. An increasing number of swarms have been reported in northern Somalia, including cross-border movements between northwest Somalia and eastern Ethiopia.
As prevailing winds coming from the north become established over the Horn of Africa, there will be an increased threat of swarm migration from Yemen, northeast Ethiopia and northern Somalia south to eastern Ethiopia and central Somalia in October that could extend to northern Kenya in November.
Other swarms are present in Eritrea, some of which moved to eastern Sudan where they laid eggs that have hatched and hopper bands are forming. Additional swarms could arrive in Eritrea from Ethiopia in the coming weeks. Winter breeding by swarms started several months earlier than normal along the Red Sea coast, which could allow an extra generation of breeding this season and cause substantial increases in locusts.
Hopper bands have formed on the coast in Saudi Arabia and Yemen, and groups in Eritrea. In southwest Asia, the upsurge ended, and only small residual infestations remained in Pakistan. In West Africa, small-scale breeding is underway in the northern Sahel. Fao
Climate Change 2020
Extreme Weather 2020
Front Page
at October 08, 2020