Reasons to be cheerful: New WHO estimate puts the coronavirus death rate at only 0.13%, claiming as many as 10% of the world population has been infected (760 million): The U.N.s figure in March was 26 times higher? University claims COVID-19’s severity may be fading 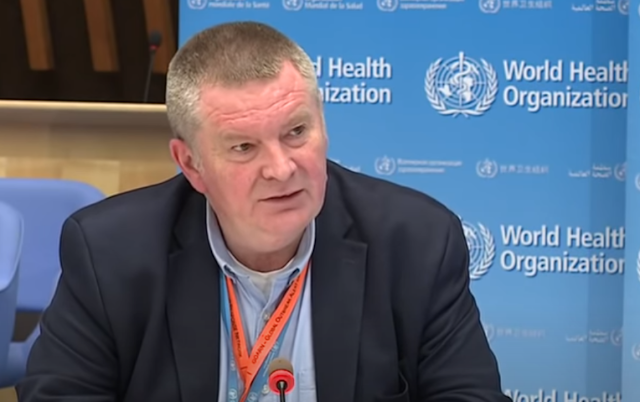 Dr Michael Ryan. Credit European Parliament, sent in by Tina Miller.
New WHO estimate puts the coronavirus death rate at only 0.13%, however, the U.N. body's figure in March was 26 times higher? On Monday, Dr Michael Ryan, the WHO’s head of emergencies, said according to its “best estimates,” one in 10 people worldwide has contracted Covid-19. This would mean that 760 million of the world’s population of 7.6 billion may have been infected.
Counts from the WHO and Johns Hopkins University put the total number of infections just above 36 million (0.5% of the world’s population) as of Monday morning. However, the WHO has long emphasized that the official tallies of the coronavirus’s impact are underestimations.
CRUCIAL QUOTE “When you count anything, you can’t count it perfectly,” said Mike Ryan, the executive director of the WHO’s health emergencies program, in late September as the virus’s global death toll approached 1 million. “But I can assure you that the current numbers are likely an underestimate of the true toll of Covid.”
BIG NUMBER 1,037,887. That's’ the number of confirmed coronavirus deaths worldwide, according to Johns Hopkins University.
KEY BACKGROUND The world’s battle against Covid-19 is far from over. As of Sunday, the most recent day for which data was available, nearly 260,000 new coronavirus cases and 3,800 deaths were reported worldwide. The number of deaths has increased by 7% over the past two weeks. While the U.S. still leads in total cases, 20 other countries, including Israel, Andorra, Argentina, Spain, Netherlands, France and the United Kingdom, are battling higher numbers of new infections per capita.
Lost in the reporting of the World Health Organization's new estimate that about 760 million people – more than 20 times the confirmed cases – have been infected by the coronavirus worldwide is the impact on the estimated survival rate. If indeed, 760 million have been infected at some point during the outbreak and the number of confirmed deaths is about 1 million, the infection fatality rate is only 0.13%. That's a little more than one-tenth of 1%, which the WHO says is the rate for the seasonal flu.
The WHO's estimate in March of a death rate of 3.4% sparked panic worldwide, fueling the catastrophic lockdowns. A rate of 3.4% is 26 times higher than a rate of 0.13%. The Associated Press reported Monday that Dr Michael Ryan, speaking to a special session of the WHO's COVID-19 board, said the figures vary from urban to rural areas. But ultimately, it means "the vast majority of the world remains at risk," said Ryan, the executive director of WHO's Health Emergencies Program.
"Many deaths have been averted and many more lives can be protected," Ryan said alongside WHO Director-General Tedros Adhanom Ghebreyesus. "Our current best estimates tell us that about 10% of the global population may have been infected by this virus," he said. The AP noted the estimate far outstrips the number of confirmed cases counted by both the WHO and Johns Hopkins University of more than 35 million worldwide. WND
Coronavirus weakening? Viral loads carried by patients on the decline, along with death rate.

While some health experts warn of a possible second wave in the coronavirus pandemic, a new study is pointing to signs that COVID-19’s severity may be fading. Researchers at Wayne State University say viral loads from patients are continuing to decrease as the pandemic progresses. This is also showing a connection to a lowering death rate.

Dr Said El Zein and his team analyzed viral loads of SARS-CoV-2, the virus causing COVID-19, coming from patient nasal swabs over two months. From April 4 to June 5, a downward trend in the amount of virus detected in patients at Detroit Medical Center was discovered.

To estimate the viral loads coming from nasopharyngeal swabs, study authors use a cycle threshold (Ct) value that comes from the tests on these samples. A higher Ct means a sample has less SARS-CoV-2 in it. Their scale rates a high viral load as a Ct of 25 and under, intermediate loads as a Ct between 26-36, and low viral loads as a Ct over 37.

During the week of April 4, just under half (49%) of COVID-19 patients had an intermediate viral load (VL). Low and high VL counts both came in at 25.5 per cent of the patient samples.

By the fifth week of the study, however, 70 per cent of positive COVID-19 swabs fall into the low VL category. El-Zein adds that this drop in viral production coincides with a decrease in, patient deaths. Researchers say 45 per cent of patients in the high VL group died from the virus. This number falls to 32 per cent for COVID-19 patients with intermediate loads and 14 per cent for the low VL group.

“During the April-June 2020 period of the COVID-19 pandemic, the initial SARS-CoV-2 load steadily declined among hospitalized patients with a corresponding decrease in the per cent of deaths over time,” the Wayne State team says in a media release. “Though confounding variables have not been evaluated, this suggests an association between initial viral load and mortality.”

Dr El Zein admits the team doesn’t know the exact reason why viral loads are dropping over time but suggest the pandemic’s severity is fading since a global crisis was officially declared on March 11. Part of this, he adds, maybe due to the public’s actions to curb the spread.

“Rapid implementation of social distancing measures, lockdown and widespread use of facemasks may have contributed to a decrease in the exposure to the virus.”

The findings were presented at the European Society of Clinical Microbiology and Infectious Diseases’ Conference on Coronavirus Disease.

Here it is again! The title: CORONAVIRUS death rate at only 0.13%....University claims COVID19's severity may be fading....(along side increased lockdowns globally).

"Is CORONAVIRUS weakening?.....Viral loads of SARSCOV2, the virus that causes COVID19...."

"The world's battle against COVID19 is far from over. As of Sunday, nearly 260k new CORONAVIRUS cases were reported."

October 3, 2020 President Trump speaks from Walter Reed Hospital that moves like a ship in his video to the nation. He said he has learned a lot about this COVID or whatever you want to call it....