"Underground fires-zombie fires," a "climate bomb". Underground peat fires have been burning for more than 5 years as unprecedented temperatures and around nine million hectares of forests, an area the size of Portugal-have been impacted by fires this year in Siberia 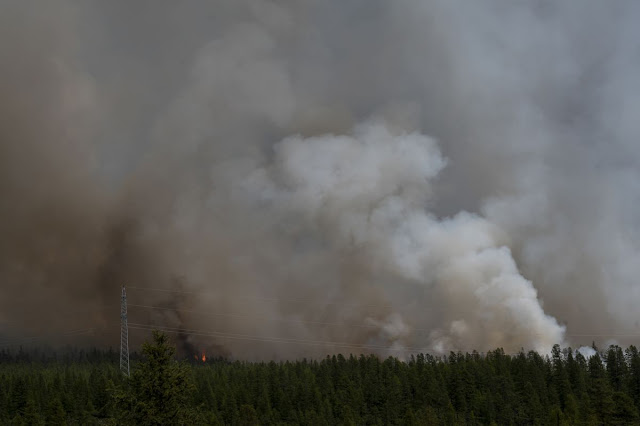 The bitterly cold Arctic winter typically snuffs out the seasonal wildfires that erupt in this region. But every once in a while, a wildfire comes along that refuses to die. These blazes, known as “zombie fires” or “holdover fires,” can burrow into the rich organic material beneath the surface, such as the vast peatlands that ring the Arctic, and smoulder under the snowpack throughout the frigid winter.
With the Siberian Arctic seeing record warm conditions in recent weeks and months, scientists monitoring Arctic wildfire trends are becoming more convinced that some of the blazes erupting in the Arctic so far this spring are actually leftover from last summer. Last year brought a record surge in Arctic fires to a region that is warming at more than twice the rate of the rest of the world.
The Arctic contains vast stores of carbon and other planet-warming greenhouse gases in its soils, both in peat as well as frozen soil is known as permafrost, that can be freed up through combustion. Peatlands are wetlands that contain ancient, decomposed and partially decomposed organic matter.
Equipped with a shovel, Grigory Kuksin lifts and turns smouldering earth in the marshy clearing of a sprawling Siberian forest. Together with a small cohort of volunteer firefighters, he is battling a winter-resistant, underground blaze, a growing problem in Russia that he calls a "climate bomb". "These are underground fires-zombie fires," said Kuksin, the 40-year-old head of Greenpeace's wildfire unit in Russia.

The vast bog topped with nettle and hemp surrounded by a thick pine forest is part of the Suzunsky nature reserve, located a two-and-a-half-hour ride south of Russia's third-largest city Novosibirsk. Its soft surface is peat-a fuel formed by the slow decomposition of organic matter in humid environments-which has been smouldering for around five years, Kuksin estimated.

Lying dormant one metre (three feet) beneath the earth's surface, the fire has survived biting Siberian winters because of low groundwater levels-a result of regular droughts. "But peat never catches fire on its own. Man is always responsible," Kuksin said, suggesting that a poorly stubbed out cigarette is enough to start a fire that will take years to extinguish.

After winter-when summer temperatures, soar-the fires can return from the dead, igniting dry grass on the surface and spreading over large areas. "That's what happened last summer," said 60-year-old Sergei Akopov, one of the volunteer firefighters tackling the blaze, saying he battled a wildfire that sparked from the bog last year. "We saw the foxes and hares running from the flames," said the trained lawyer who has repeatedly wrestled with bog fires over the past few years.

Vicious cycleScientists say Siberia and the Arctic are especially vulnerable to climate change and have recorded startlingly high temperatures and worsening forest blazes. In June, the Arctic city of Verkhoyansk recorded unprecedented temperatures of 38 degrees Celsius and around nine million hectares of forests, an area the size of Portugal-have been impacted by fires this year, officials said. Peatland fires are an additional threat to the climate because of the large quantities of carbon dioxide they release into the atmosphere. "It's a climate bomb," said Kuksin.
He said it was a vicious circle where fires made worse by climate change release gases that in turn exacerbate climate change. "We are fighting both against the result of climate change and the very thing that causes it," he said. The Nature website has recently reported an alarming increase in the frequency of peatland fires in the Arctic zones, both in North America and Russia.
'Dirty job'Peatland is also often more complicated to extinguish than conventional forest fires. "To extinguish a bog, you have to flood it and mix the earth thoroughly until you get a liquid paste," said Ekaterina Grudinina, 38, a Greenpeace coordinator in Siberia and the Far East. Nearby, volunteers drenched the ground with water pumped from a nearby marsh and sprayed it with two fire hoses. Once the earth is turned over and saturated, the temperature of the underground layer of peat is measured. If the temperature is above 40 degrees, the process is repeated. "It's a dirty job", said Alexander Sukhov, a 38-year-old farmer who last year created the volunteer group that was trained by Greenpeace.
The environmental group says its volunteers are left to carry out the difficult work without help from local emergency services who it says lack the skills and experience to put out peat fires. "They pretended this fire didn't exist for five years," Kuksin said. After failing to get local authorities to support his team of volunteers earlier this month, Kuksin appealed to a senior forest protection official in Moscow, circumventing protocol and "calling in a favour".
The local natural resources ministry told AFP that it had dispatched three vehicles and six men and that they had put out the fire after 24 hours. Both the professional and volunteer firefighters have since left, Kuksin said, but he is confident that beneath the surface, "the bog continues to burn."
Anchorage Daily News
Climate Change 2020
Front Page Headlines
at September 24, 2020