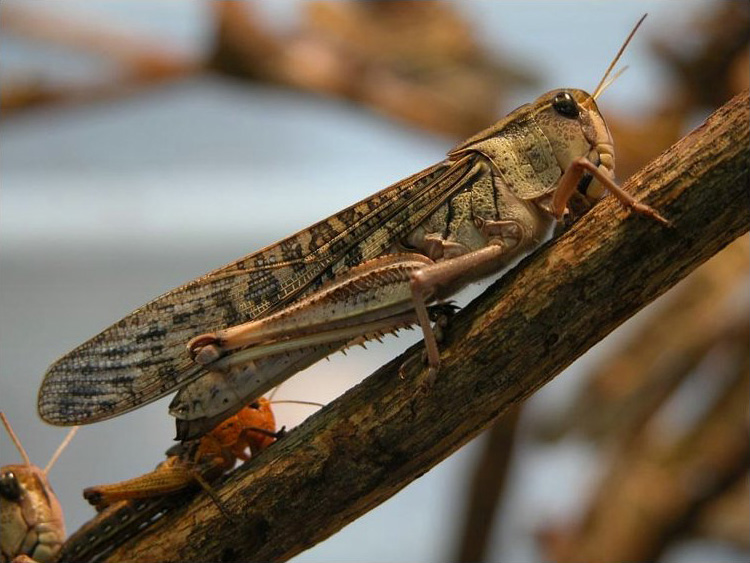 Migratory locusts, not to be confused with the larger desert locust. Credit Wikipedia
Authorities in Botswana, Namibia, Zambia and Zimbabwe are scrambling to control titanic swarms of migratory locusts, which have put 7 million people in the southern region at risk of famine. The four countries have launched pesticide spraying efforts to combat the invasion, as the United Nations warns that up to 7 million people risk experiencing food insecurity.
Smallholder farmers in Botswana lost their entire harvest at the start of the southern outbreak in May, with the growing region of Pandamatenga and its key sorghum crops at risk. Namibia's initial outbreak in the Zambezi plain has spread to key farming regions, while locusts in Zambia are spreading rapidly and affecting both crop and grazing lands. The outlook is no better in Zimbabwe, where swarms and hoppers--juvenile insects--have infested two sites in the Chiredzi District, home to a sugar estate, and are now invading the country's second-most populous province, Manicaland.
The ravenous insects are distinct from the desert locust, which has already flattened farms and devastated crops in the Horn of Africa. While far smaller, the migratory locusts are spreading at a voracious pace. A single swarm can contain millions of locusts and can eat in a day the equivalent of what 2,500 people would consume, according to the Food and Agriculture Organisation (FAO). The UN agency has called for urgent action to prevent a wider problem as farmers struggle to recover from last year's drought and the economic effects of the Covid-19 pandemic.
"The situation is aggravated by the inaccessibility and ecological sensitivity of some of the affected areas," the agency said. A new emergency response initiative seeks environmental friendly pesticides, notably for Botswana's wildlife-rich Okavango Delta, which has become one of the locust's breeding grounds."Even with the control measures already taken, the locusts are still a threat," admitted Patrice Talla, a regional FAO officer. "Some of the worst-affected areas are very difficult to reach.
We need to support the four governments," he said. The Food and Agriculture Organisation is spending $500,000 (420,000 euros) on aerial surveillance, mapping and other locust suppression strategies. The battle is ongoing for farmers in East Africa, the Middle East and southwest Asia. They have watched with horror as titanic swarms of desert locust have blackened their fields and skies. The upsurge -- which has been linked to unusually heavy rains and a tropical cyclone on the Arabian Peninsula -- is the worst crisis some regions have seen for 70 years.
The gigantic swarms are unusual for locusts, which usually adopt a solitary lifestyle. Tests on the migratory locust found that young nymphs, known as hoppers, band together when they identify a sweet-smelling pheromone, a chemical which-- like the love hormone serotonin-- makes you attracted to someone. This chemical attraction has led to the billion-strong outbreaks of adult insects in various parts of the world, foreshadowing plague proportions.
2020 Locust Plague
Front Page Headlines