Just a week after Typhoon Bavi battered the two Koreas "Super Typhoon Maysak," will impact South Korea by Thursday: Tropical storm Haishen is developing north of the Marianas and could become the strongest typhoon of the 2020 Pacific season smashing into Japan on Monday 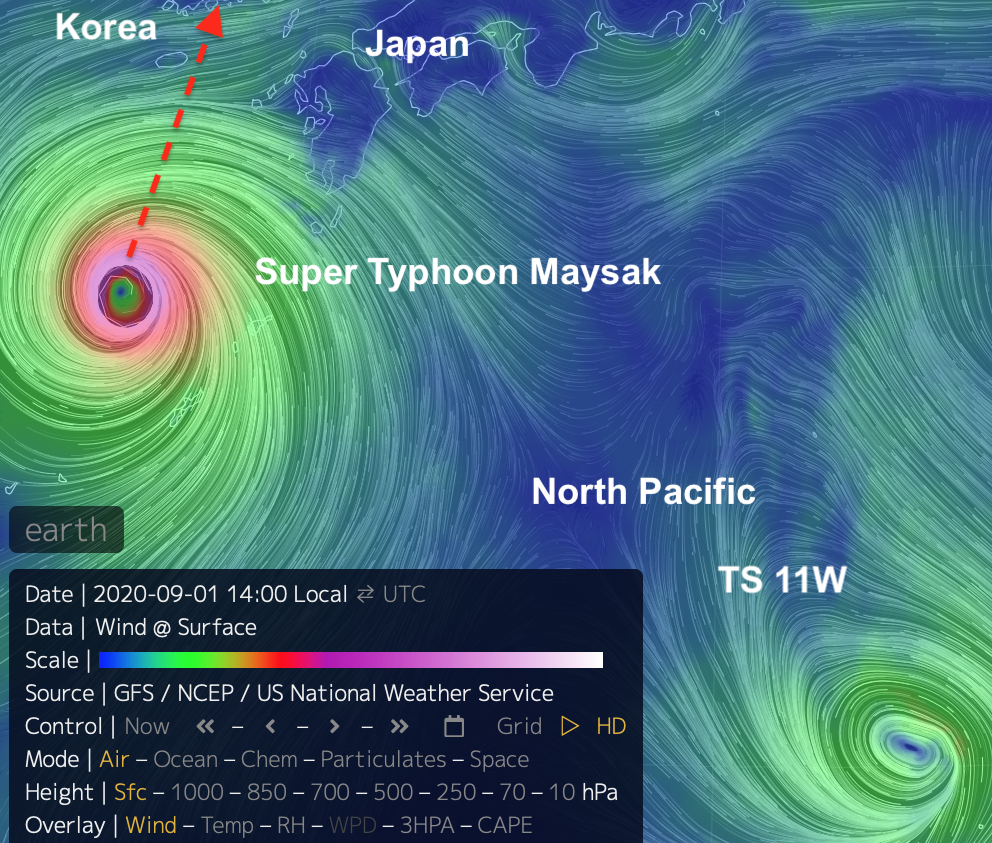 Earthwindmap showing Super Typhoon Maysak and Haishen which is developing north of the Marianas and could become the strongest Earth’s typhoon of the 2020 Pacific season.
The "Super Typhoon Maysak," will impact South Korea by Thursday along with a potentially violent typhoon forming southwest of Maysak which will head for Japan this weekend. According to Severe Weather Europe, tropical storm Haishen is developing north of the Marianas and could become the strongest Earth’s typhoon of the 2020 Pacific season, at the moment it is unnamed TS 11W. According to the latest weather models, Haishen could become an extremely powerful typhoon over the next days and strike western Japan on Monday next week. Haishen comes right after the monster Super typhoon Maysak is approaching the Korean peninsula now.
A large part of the Western Pacific is extremely warm. That is exactly where the new typhoon will track. The sea waters are literally boiling hot! Sea surface temperatures of 30-31 °C are spread along southern Japan and over the Marianas and the Philippine Sea, warm water is like rocket fuel for these storms.
SEOUL, Sept. 1 (Yonhap) -- South Korea's provincial governments are on high alert Tuesday as another typhoon forecast to be more powerful than one that hit the country last week is approaching the country and expected to affect their regions. According to the Korea Meteorological Administration, Typhoon Maysak was travelling north-northeastward at a speed of 16 kilometres per hour from waters some 220 kilometres west of Japan's Okinawa Island as of 3 p.m. The central pressure of the season's ninth typhoon was 935 hectopascals, with its radius of maximum wind at 380 km and its maximum wind speed at 49 meters per second.
Hurricanes and Cyclones 2020
Front Page Headlines
at September 01, 2020