Ball of confusion: While MAGA and BLM duke it out on the streets of the US, what's happening in America, and the rest of the world can be likened to what happened to the Jewish system which experienced its last days from 33 AD to 70 AD when the Romans executed judgement on the Jews. 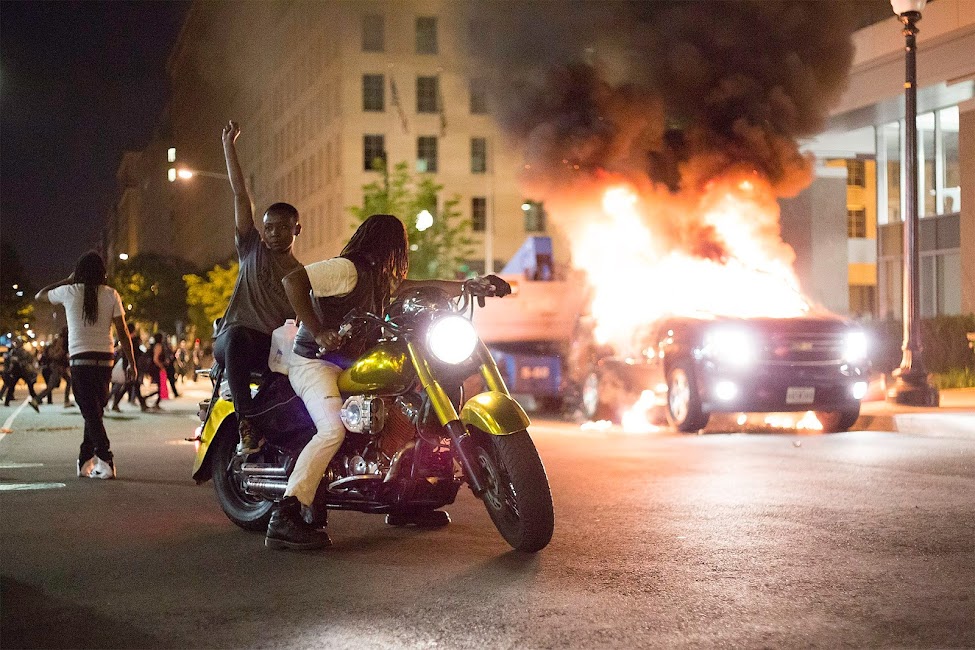 Riots in the USA, credit Wikipedia

Madam Mortified
To hogorina
FYI I was a student in PR China in 1989 during the Tian An Men Square [Tiananmen Square] MASSACRE; I was living there and travelling quite a lot throughout China from March-June 1989. And then, on June 4th, the CCP (Chinese Communist Party) ordered the PLA (People's "LIBERATION" Army) to slaughter its own citizens, the Chinese people. And THEY DID. No one knows how many... (I went back in 1992 and again in 1994-1995). I would never step foot there again.
JUST SO YOU KNOW: Communism--aka "Socialism" --they are THE SAME EXACT BEAST whatever LIES you've been told--is the most brutal, sadistic, inhuman, terrorizing, murderous, horrible form of government in the world. IT IS PURE EVIL.
AS FOR THE USA: WHEN GOVERNMENT MERGES WITH THE CORPORATIONS, AS IN THE USA, THIS IS FASCISM. BRUTAL BEYOND A DOUBT. FASCISM AND COMMUNISM ARE TWO SIDES OF THE SAME EXACT COIN. BOTH ARE EVIL TOTALITARIAN DICTATORSHIPS RULED BY THE WEALTHIEST PEOPLE IN THE WORLD. THE UNITED STATES GOVERNMENT WAS DISSOLVED IN BANKRUPTCY IN THE YEAR 1933. AS SUCH, THE UNITED STATES OF AMERICA “GOVERNMENT” EXISTS IN NAME ONLY AND IS, IN FACT, A PRIVATELY OWNED CORPORATION RUN SOLELY UNDER THE AUSPICES OF THE PRIVATE BANKS AND PRIVATE CORPORATIONS AND THE UNITED NATIONS.
The United States INC. DBA the US “government” and all the career politicians/lifelong parasitic sycophants and the countless bureaucrat paper-shufflers/"useful idiots" (STALIN'S TERM) within its many taxpayer-funded departments and agencies are actively engaged in an elaborate criminal conspiracy and all are engaged in criminal collusion with multiple private international banks and multiple private international corporations in cahoots with the UNITED NATIONS, which itself seeks to overtake the entire world in its fascist totalitarian global governance scheme.
FACTS TO KNOW: "THEY"--THE TRILLIONAIRES--OWN EVERYTHING. AND THE SAME EXACT "RULING CLASS" THAT CREATED THESE MONSTROUS U.S. CORPORATE MONOPOLIES THAT OWN AND RUN THE U.S. "GOVERNMENT," ALSO CREATED MARXIST COMMUNISM.
A Big Wobble Comment
Posted 2 September 2020 at 21:20 by Madam Mortified.

At the risk of being sanctimonious.

A 'wild beast' who walks the earth like a roaring lion is the one responsible for the political system of this 'ball of confusion,' we call earth. In the history of mankind, there has never been a political party, President, leader, King or Queen who has ever brought lasting happiness to all his or her subjects. Our politics are flawed, corrupt, biased and unfair, led by lying, selfish, greedy, cruel megalomaniacs, whether coming from the right or the left.

Every civilisation, Empire or kingdom has eventually collapsed, with the US looking incredibly vulnerable at this very moment. In Genesis 8:21. The Lord smelled the pleasing aroma and said in his heart: “Never again will I curse the ground because of humans, even though every inclination of the human heart is evil from childhood.

We could never hope for a peaceful loving society in this system of things. Throughout history the struggle for the 'people,' whether it be wars, revolution, civil wars, protests or demonstrations has never changed anything, the system is rigged to stay in place whoever is in charge be it a Leftist or a Rightist.

While MAGA and BLM duke it out on the streets of the US, Facebook and Twitter and other social media outlets, what is happening in America, and the rest of the world for that matter can be likened to what happened to the old Jewish system which experienced its last days from 33 AD to 70 AD when the Romans executed judgement on the Jews.

Spend ten minutes on Twitter or Facebook and read some of the hateful, vile, violent posts, they will blow your mind. The aggression being posted is overwhelming and shocking and very disturbing. The videos circling the net showing people shooting each other, brawling, screaming, hating, trashing businesses and looting is actually frightening to watch because the videos are documenting the collapse of a society, one can feel the darkness coming from within people, it's awful. A dark spirit is clearly at work.

This year we entered the most important decade in the history of mankind and it has been eight months which have literally shocked the world. A global pandemic which has cost the lives of nearly a million people, (conservative guess), with another 25 million infected. Worse still, some 1.6 billion people employed in the informal economy – or nearly half the global workforce - could see their livelihoods destroyed due to the continued decline in working hours brought on by lockdowns to curb the spread of COVID-19, according to the International Labour Organization (ILO).The beginning of the most important decade in the history of mankind also opened a pressure cooker of global social-justice movements, which have surged onto the streets of major cities worldwide, spreading hate, violence and destruction against governments, leaders, authority and even our perceived history, anger has become the new normal.We have seen a rise in nuclear-armed countries, sabre-rattling, masking their fear with macho posturing, gung-ho rhetoric, in a flag-waving nationalistic way, aggressively insulting one another which can only lead to one outcome, WWIII. If only they realised they were being played by dark satanic forces, pulled and pushed like puppets in a theatre of hate.Our preconceived Hollywood perception of ourselves has seen a return of wild west values, London, often considered one of the safest capitals of the world has become a hotbed of hate and violence with a surge in murders and has a new title, "the wild west". In Chicago, murders increased by about 60% and shooting victims rose by 71% last month, according to police statistics. The crime rate in Paris has seen a 70% rise, rival Muslim gangs recently took to the streets of Dijon using automatic weapons against each other while frightened residents cowered behind closed doors. New York is the same story. There have been 38 murders over the last 28 days, twice as much as the same period last year, according to NYPD. So far this year, there have been more than 300 murders, which is 50% higher than last year.

We don't have to be Albert Einsteins', or Stephen Hawkins' to realise we must be closer than ever to the tribulation period mentioned in the Bible. Buckle up and hold on tight folks it's gonna get even more messy IMHO.

Unfortunately, too true. End Times signs are pointing to the Rapture of the Church. Then, a global “reset” for a New World Order: https://raptureandendtimes.com/2020/05/30/end-times-updates-9-signs-of-the-reset/

I lean towards a mid or before wrath rapture but i do agree we are to start tribulation. I feel to watch signs around passover 2021 for the start of the tribulation, the signs are just so strong with a chance of a ramping up of birth pangs in October and November. I feel there is a connection to eclipse of 2017 and release of bacteria in the 99 red balloons. it was not the 1st release and subsequent illness or death that followed. Another eclipse April 8th, 2024 which i feel will reconcile close to the middle of the tribulation. i cannot say the dates are correct but its only a range i feel but i cannot say the dates are correct although as far as the years??? the signs are all around us. undenialbly. any feelings on the subject?
and additionally, i hope all who believe in a pre-rapture are correct.