351 sea turtles found dead on same coastline where 137 sea lions mysteriously died earlier this month: In 2019, 331 loggerhead turtles were found dead in the area, and in 2018 the figure stood at 459. 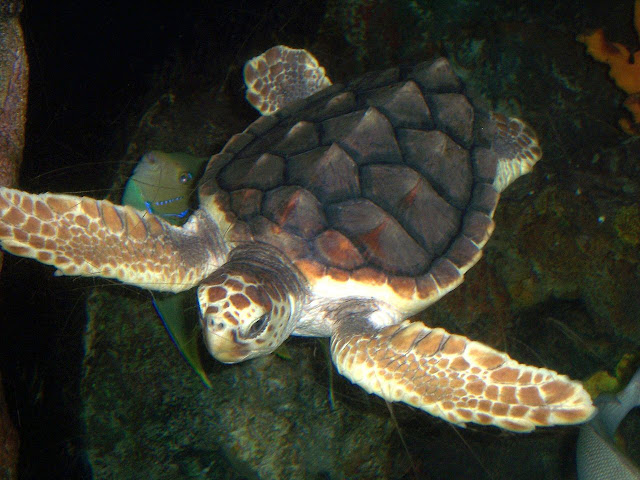 Credit, Wikipedia
351 sea turtles have washed up dead on the same coastline as mass sea lion beaching  The main reason behind the deaths is thought to be the use of nets and line fishing around this area of the coast.
351 loggerhead sea turtles have been found dead on the same stretch of coastline where 137 sea lions were found deceased earlier this month. TBW  The loggerhead sea turtles and sea lions were found on the Baja California coast, in northwestern Mexico. The Mexican Centre for Environmental Law and the Centre for Biological Diversity have both said the death of the sea turtles highlights the need for net and line fishing to be banned in this area of the Pacific coast. Sky News
Searches following reports of beached sea lions on 4 September found the animals' carcasses scattered along an 80-mile stretch of coast in Comondu, Baja California. Tissue samples from the animals have been collected to establish a cause of death after authorities said the sea lions showed no sign of injuries from fishing nets or lines. In Mexico, California sea lions are a protected species but aren't considered to be at danger of extinction. However, loggerhead sea turtles are considered endangered in the country. Activists have argued that the use of nets is the main reason behind the death of sea turtles. In 2019, 331 loggerhead turtles were found dead in the area, and in 2018 the figure stood at 459.
Baja California has long been an area of unusual mass marine die-offs, in February 2017, a red tide algae bloom was blamed for the death of nearly a 100 turtles off the coast of La Paz. The Federal Environmental Protection Agency (Profepa) reported that the specimens had no evidence of fishing gear or any human activity, saying that the cause of death was the Red Tide. Each of the turtles found had been dead for more than 8 days, a further 3 tons of krill were also found dead in the area.
On the 17th July 2017, Bcs Notacios reported- 7 dead whales found on the coast of Baja California Sur, Mexico.
In February 2018,54 dolphins were found stranded in the Bay Of Lapaz, Baja, California Sur Experts and helpers tried in vain to save the dolphins but 24 died. And on the same day, 11 dolphins were found dead along the coast of Mazatlan, Mexico.
As usual in these circumstances, officials were left puzzled as to why the dolphins died.
Animal Die-Offs 2020
Front Page
at September 17, 2020