Three days of monsoon rains have killed at least 90 people and damaged 1,000 homes across Pakistan as no end is in sight from rains which have killed more than a 1,000 and affected millions of people over large swathes of Asia, from Pakistan, northeast India and Bangladesh to China, Mongolia, and Japan. 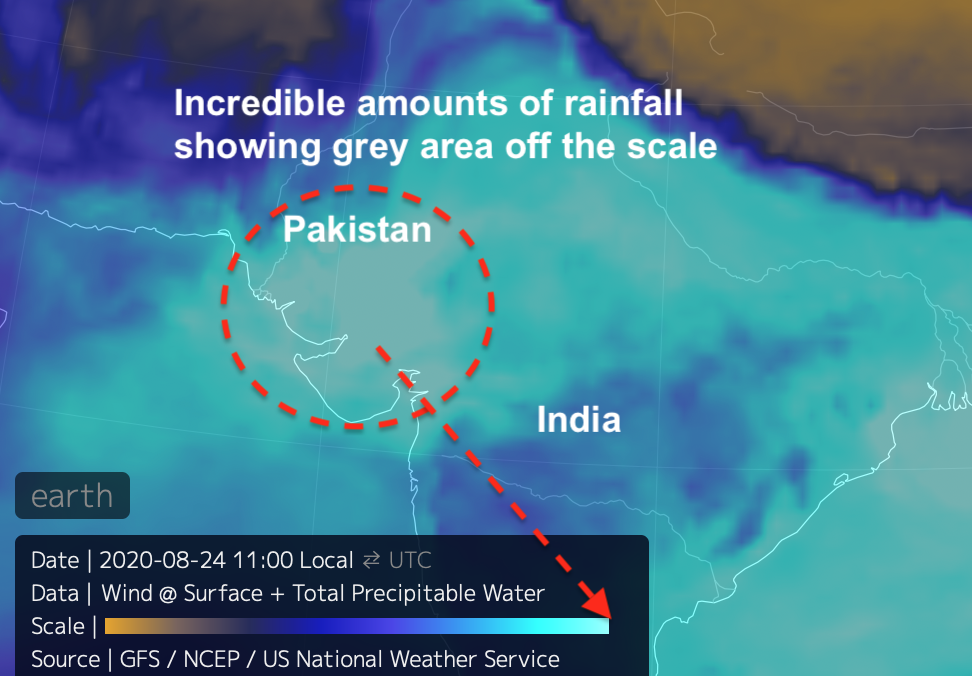 Earthwindmap showing rainfall on Pakistan is off the scale.

Three days of monsoon rains have killed at least 90 people and damaged 1,000 homes across Pakistan, the country's national disaster management agency said Tuesday, as another spell of heavy rain lashed the port city of Karachi. Streets and homes were flooded with sewage water in Karachi, where the drainage and sewage systems are outdated. Of the total of the rain-related casualties, 31 deaths were reported in southern Sindh province, while 23 people died in the province of Khyber Pakhtunkhwa, according to the agency. It said 15 deaths were reported in southwestern Baluchistan province and eight in Punjab province. Thirteen more people died elsewhere in northern Pakistan, including three in the Pakistan-administered sector of Kashmir. The rains are expected to continue this week in Karachi, where Prime Minister Imran Khan earlier this month sent troops to help local authorities in pumping out rainwater from inundated residential areas. Every year, many cities in Pakistan struggle to cope with the annual monsoon deluge, drawing criticism about poor planning. The monsoon season runs from July through September.

A series of torrential rainfall events have been hitting Western Africa, Indo Pakistan, Bangladesh China and Japan on and off since the beginning of June. More than a thousand people have died and millions have been displaced.
Unusually heavy monsoon rainfall is driving severe flooding over large swathes of Asia, from Pakistan, northeast India and Bangladesh to China, Mongolia, and Japan. Floods have hit nearly 10 million people in South Asia, destroying crops and farmland, forcing evacuations, and killing at least 550 people in Bangladesh, India, and Nepal, according to the International Federation of Red Cross and Red Crescent Societies. In Bangladesh, a third of the land has been submerged, hundreds of thousands are stranded, and more than 500,000 homes have been inundated, the UN reported. More than 100 people have died in floods and landslides in Nepal, where rapid urbanisation has also exacerbated disaster risks. Heavy rains and floods have forced some 2.7 million people in China to evacuate, according to the EU’s humanitarian aid arm, ECHO. Flooding around the Yangtze River basin this year has been “unprecedented”, according to the state-run news agency, Xinhua. And in Mongolia food security is becoming a pressing issue for hundreds of evacuated families after flash floods damaged key arteries, the Red Cross reported. Full story
Extreme Weather 2020
Front Page
at August 25, 2020