A long year of weather destruction continues and the madness increases. California beats 2019 fire record in less than a month. Two hurricanes could hit New Orleans on the same day: The Northern Hemisphere saw its hottest July ever: More than a thousand people have died and millions displaced by Asian rains 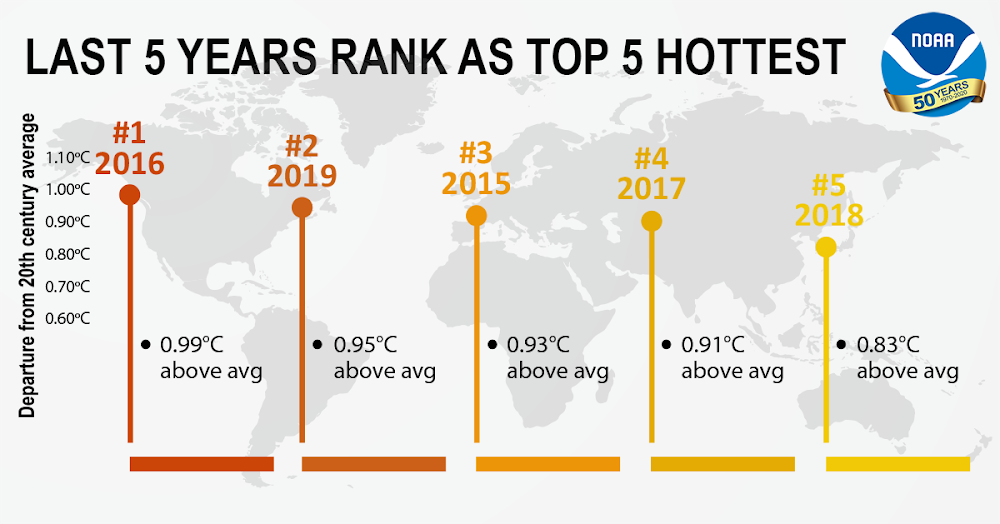 The five hottest years on record, with 2020 set to be the hottest. Courtesy of NOAA NCEI, Barbara Ambrose.

2020 is proving to be the most horrendous year that many experts had earlier predicted. On top of a devastating coronavirus which is infecting more than a quarter-of-a-million people a day and has almost killed a million people in the first 8 months of this year, however, without question the most destructive force of 2020 has been the weather and because of the Covid-19 stealing the media headlines many of the weather disasters this year have not been reported on.

Many of us don't need media reports to realise something is very wrong with the weather. Heatwaves are becoming hotter and longer-lasting, here in Holland we have just endured a record 10-day heatwave with temperatures in the high 30s C 106+F, which due to high humidity had a real feel temperature of around 45+ C, 113+F.

In winter this year, we witnessed the terrible consequence of climate change when drought, heat and high winds burned 25% of Australia's temperate forests, killed or injured 3 billion of its natural wildlife and damaged 60% of Australian crop output. Wildfires are normal in Australian summers, however, wildfires this year smashed all previous records by a country mile and burned an area the size of Syria. Australian Prime Minister Scott Morrison caused anger among Australians when he denied climate change was the cause of the record-breaking fires.

Another leader denying climate change is President Trump. In a tweet reported by CNN, Trump blamed "gross mismanagement" for the devastating California wildfires and just as the Aussie leader, Trump is sparking a backlash from top firefighters' associations, politicians and celebrities. In a series of tweets Saturday, Trump said the state's deadly wildfires are a result of poor forest management and threatened to cut federal aid. "There is no reason for these massive, deadly and costly forest fires in California except that forest management is so poor," Trump tweeted. "Billions of dollars are given each year, with so many lives lost, all because of gross mismanagement of the forests. Remedy now, or no more Fed payments!"

He may have a point, California has hundreds of millions of dead spruce trees caused by a debilitating beetle infestation. However, the record-breaking early start to the Californian fire season has already destroyed 1 million acres since July