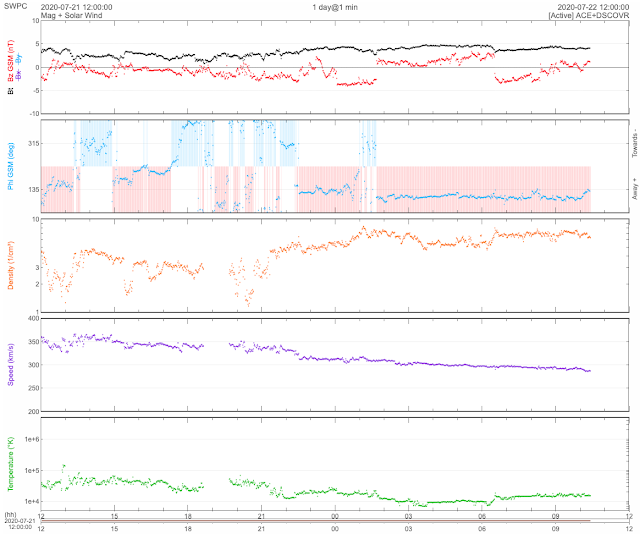 Real-time solar wind provided by NOAA showing the density, speed, temperature and even the angle at which the protons hit the earth's magnetosphere. Click on image to enlarge.

It is a theory The Big Wobble has championed for years, solar activity reacting with the earth's magnetosphere causes large earthquakes worldwide.

A new paper released on Scientific Reports has the science world excited with possible proof of what many scientists have always believed but could never prove. Published just over a week ago it proceeded this year's largest quake, today's magnitude 7.8, which struck Alaska this morning.

Large earthquakes occurring worldwide have long been recognized to be non Poisson distributed, so involving some large scale correlation mechanism, which could be internal or external to the Earth. Till now, no statistically significant correlation of the global seismicity with one of the possible mechanisms has been demonstrated yet. In this paper, we analyze 20 years of proton density and velocity data, as recorded by the SOHO satellite, and the worldwide seismicity in the corresponding period, as reported by the ISC-GEM catalogue.

We found a clear correlation between proton density and the occurrence of large earthquakes (M > 5.6), with a time shift of one day. The significance of such a correlation is very high, with the probability to be wrong lower than 10–5. The correlation increases with the magnitude threshold of the seismic catalogue. A tentative model explaining such a correlation is also proposed, in terms of the reverse piezoelectric effect induced by the applied electric field related to the proton density.
This result opens new perspectives in seismological interpretations, as well as in earthquake forecast.

This paper gives the first, strongly statistically significant, evidence for a high correlation between large worldwide earthquakes and the proton density near the magnetosphere, due to the solar wind. This result is extremely important for seismological research and for possible future implications on earthquake forecast. In fact, although the non-Poissonian character, and hence the correlation among large scale, worldwide earthquakes was known since several decades, this could be in principle explained by several mechanisms.

In this paper, we demonstrate that it can likely be due to the effect of the solar wind, modulating the proton density and hence the electrical potential between the ionosphere and the Earth. Although quantitative analysis of a particular, specific model for our observations is beyond the scope of this paper, we believe that a possible, likely physical mechanism explaining our statistical observations, is the stress/strain pulse caused by reverse piezoelectric effects. Such pulses would be generated by large electrical discharges channelled in the large faults, due to their high conductivity because of fractured and water-saturated fault gauge.

The widespread observations of several macroscopic electromagnetic effects before, or however associated with large earthquakes, support our qualitative model to explain the observed, highly statistically significant, proton density-earthquakes correlation. It is important to note that our hypothesis only implies that the proton density would act as a further, small trigger to cause the fracture on already critically charged faults, thus producing the observed large scale earthquake correlation. Such a small perturbation would add to the main factor in producing worldwide seismicity, which is tectonic stress.