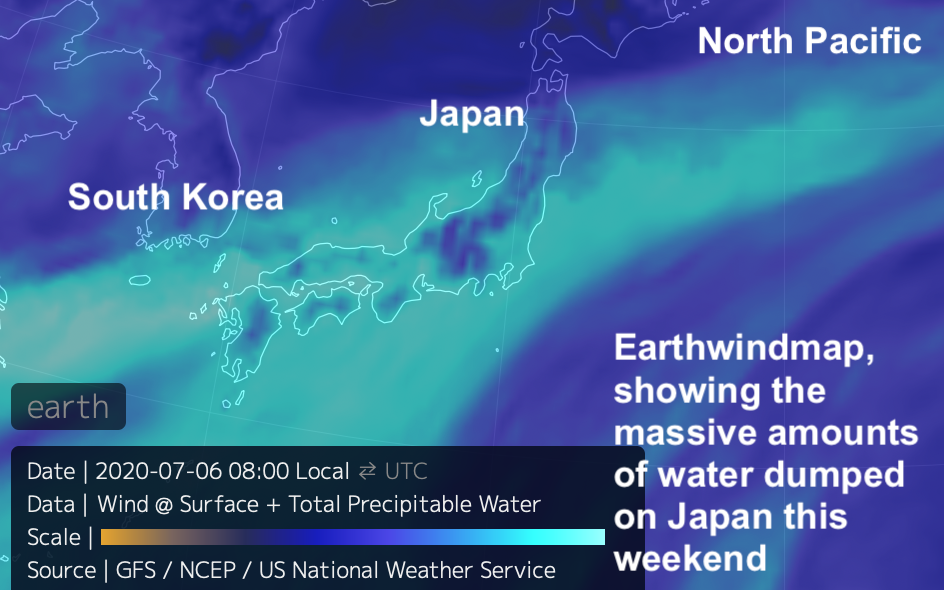 Almost 40 people are either confirmed or feared dead including 14 people at a nursing home after torrential rain in Japan triggered massive floods and mudslides, over the weekend. At least another 13 people are missing, a further 200,000 have been ordered to evacuate their homes as torrential rains continued to hit Japan’s southwestern island of Kyushu, with river banks at risk of bursting on Monday morning and new evacuation orders put in place.

Evacuation centres are under pressure maintaining social distancing preventing the spread of the novel coronavirus.

The floods in Kumamoto Prefecture in Kyushu have destroyed houses, swept away vehicles and caused bridges to collapse, leaving many towns submerged and communities cut off. Communities along the Kuma River, which passes through Hitoyoshi, have been hit hard by the floodwaters. Although the rain had eased in Kumamoto by Sunday morning, collapsed bridges and blocked roads due to flooding and mudslides have left many isolated in the region.

The torrential rain and flooding over the weekend came just a week after Nagasaki suffered a once in 50-year rainfall event which devastated the area.

Incredible amounts of rainfall have affected untold millions of people, displaced hundreds of thousands and killed hundreds after torrential rainfall has hit Eastern Africa, the Middle East, Arabia, Indo Pakistan and the Far East in June and early July.

Torrential rains in the Yangtze river basin coupled with the release billions of tons of floodwater from the massive Three Gorges hydroelectric dam upstream have left major cities along the river submerged after record rainfall. Heavy rains in the Yangtze region have left at least a 100 people dead since May with more than 14 million people affected by the floods and decimating Chinese agriculture. Meanwhile, At least 3 people have died in flash flooding in Yunnan Province, southwest China. Heavy rain from 29 June caused flash flooding in the city of Zhaotong and the counties of Zhenxiong, Yiliang, Weixin and Yanjin. Rainfall of over 225 mm in 24 hours was reported in the area. According to local news reports, 33,380 people were affected and 8 homes damaged or destroyed. The damage was also caused to the power supply, transport and telecommunications, along with over 3,500 hectares of crops.
The flood situation continues in the state of Assam, northeast India, where disaster authorities say more than 1.4 million people are now affected. Rivers have been overflowing in the state since 20 June in the current spate of flooding. Since then 1.49 million people in 2,235 villages across 23 districts have been affected. Barpeta is still the worst-hit district, with 486,709 now people affected, an increase from 135,415 on 2 days earlier. Areas of South Salmara district have recently flooded, with 195,312 people affected. Other hard-hit areas include Dhemaji, Nalbari, Morigaon and Goalpara districts, all with between 70,000 and 100,000 residents affected.
The Flood Forecasting and Warning Centre (FFWC) in Bangladesh reports that rivers are above danger levels in 14 locations across the country, as of 30 June 2020. Seven locations are at warning level. Local media report thousands of people in Jamalpur, Kurigram and Gaibandha districts are marooned or displaced, with their homes and land submerged. According to the Dhaka Tribune, over 100,000 people in Jamalpur district have been marooned after floodwaters surrounded their homes. Over 150,000 of people in Kurigram have been affected by flooding, with wide areas of crops underwater. As of 30 June, FFWC reports that that the Brahmaputra river at Noonkhawa in Kurigram stood at 27.14 metres, above the danger mark of 26.5 metres and the Dharla in Kurigram stood at 27.46 metres, where danger levels are 26.5 metres.
A landslide caused by monsoon rains in Myanmar has killed no less than 160 people, the country's emergency services said on Thursday. Earlier in the day, the Xinhua news agency reported a death toll of 96. The landslide came at about 8 a.m. local time (1:30 GMT) at a jade mine near the Hpakant township, located in the Kachin state. The actual number of casualties is likely to be much larger, as the incident occurred during working hours, meaning that hundreds of people could be buried at the mining site. "The latest information on the landslide in Hpakant:160 dead. The rescue works continue," the country's fire department wrote on Facebook. Myanmar's landscape is known for being prone to landslides, especially during rainy seasons.

thank you for all your reporting