Manic May: Locust swarms expand, migrating: Incredible amounts of rainfall, more than a million displaced: Hottest May ever tied: Unusually strong tornadoes: Some parts of the northern hemisphere experienced a return to winter: Could be the hottest year ever 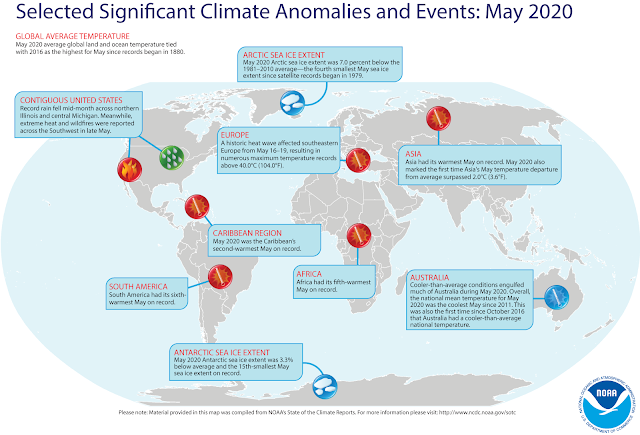 Latest Desert Locust situation update: Rain causing swarms to expand. In a new development,  swarms are now migrating toward West Africa as the groups increase, new swarms are about to form in East Africa.

An absurd amount of water poured down all over the world in May and an incredible amount of rain fell on all areas suffering from locust swarms from Africa to India killing hundreds and displacing more than a million people.

A second-generation of immature swarms have now started to form in northwest Kenya as of 9–11 June, this is a result of heavy rainfall and flooding in May which killed more than 240 people and displaced 100,000 Kenyans. Swarm formation will continue for about four weeks while the bulk of the swarms will form during the second half of June. Prior to migration, swarms will remain for a short time during which there is a considerable threat to crops and pastures in Turkana and Marsabit counties. From about 15 June, an increasing number of swarms are expected to migrate northwards with the prevailing winds to Ethiopia and Sudan.

In Ethiopia, swarms are likely to first appear in the south and continue to Oromia, Somali, Amhara, Afar and Tigray regions. Once again heavy rains in May are to blame, mote than 200,000 Ethiopians were displaced due to flooding in May. It will take about one week for swarms to migrate from northwest Kenya to Sudan. During that time, they will traverse South Sudan (mainly east of Juba, Bor, and Malakal) and perhaps northeast Uganda, where heavy rainfall caused flooding killing 8 and displacing 100,000 people in May.

Swarms are expected to reach the extreme southern summer breeding areas of Sudan (South Kordofan, West Kordofan, East Darfur, South Darfur, White Nile, Blue Nile). From there, some swarms may continue to North Kordofan, North Darfur, and perhaps West Darfur. Other swarms may appear in states adjacent to Ethiopia (Sennar, Al Qadarif, Kassala). If swarms reach Sudan and find dry conditions, then they are likely to migrate to eastern Chad and continue westwards across the Sahel of West Africa. This threat should decline progressively during the next four weeks as the summer rains commence in Sudan.

In Yemen, highly mobile swarms are moving in the interior, coastal and highland areas, including Sanaa after heavy rainfall and floods, caused the displacement of 150,000 people in May. Some of these swarms could migrate to northern Somalia, again suffering massive flooding in May displacing 200,000 and killing 8.

In Oman, at least one swarm continued to be reported in the Dhofar Hills of the south.

Sudan, Ethiopia, and South Sudan should remain on high alert during the next four weeks. West Africa should continue to take anticipatory measures.

Other areas suffering from the unprecedented locust swarms also suffered an incredible deluge of rainfall in May which favours hatching.

Iran suffered heavy rains as did the UAE, Afghanistan and Pakistan, India and Bangladesh were hit by Cyclone Amphin which also displaced tens of thousands of people. More here

The rest of the world in record-breaking May

After registering unusually high temperatures across the globe, May 2020 tied with 2016 as the world’s warmest May on record, according to scientists at NOAA’s National Centers for Environmental Information. The heat wasn’t just limited to May. The three-month season (March through May) and the year to date (January through May) ranked second-warmest in the 141-year global record.

Climate by the numbers May 2020

Arctic sea ice was low, again: The May average Arctic sea ice coverage was the fourth smallest in the 42-year record, 7.0% below the 1981–2010 average, according to an analysis by the National Snow and Ice Data Center offsite link. Some places chilled out a bit, cooler-than-average temperatures were seen during May across much of Canada, the eastern contiguous United States, eastern Europe and Australia, where temperatures ran at least 1.8 degrees F (1.0 degree C) below average. Full Story

Some parts of the northern hemisphere experienced a return to winter... one month away from summer, while early snow and cold records were hit in the southern hemisphere when winter has not yet "officially" begun. A rare May snowstorm triggered by a polar vortex whipped through the northeast of the US, with parts of Maine and New Hampshire receiving as much as 10 inches of snow and near white-out conditions in upstate New York.

Greece, Germany, Turkey and Russia also got their share of unseasonable snow, but Ayubia National Park in Pakistan was covered in snow for the first time in a century and Australia ended up with 40 inches of snow during the coldest start of May ever recorded.

An absurd amount of water poured down all over the world in May, causing devastating floods and landslides. Kenya, India, Oman and Central America were the most affected with hundreds of deaths and thousands displaced. Cyclone Amphan left a path of destruction in Odisha and West Bengal, India leaving hundreds of families without homes and thousands without electricity.

Unusually strong tornadoes, multiple twisters at once - where it's not common - and big hail also left a path of destruction in the US, Mexico and parts of Europe and Asia.

And last but not least: India, Pakistan and East Africa suffered their worst locust attack in 27 years, leaving millionaire losses in crops and widespread damage in vegetation. Combined with the unnecessary food losses caused by the lockdown, we might be looking at millions more going hungry in the not too distant future.