NOAA is claiming 2020 has already a 75% chance of being the hottest year ever and it's still only April: Many parts of Western Europe and the UK have had only around 5% of their average April rainfall: Parts of US driest since 1500s 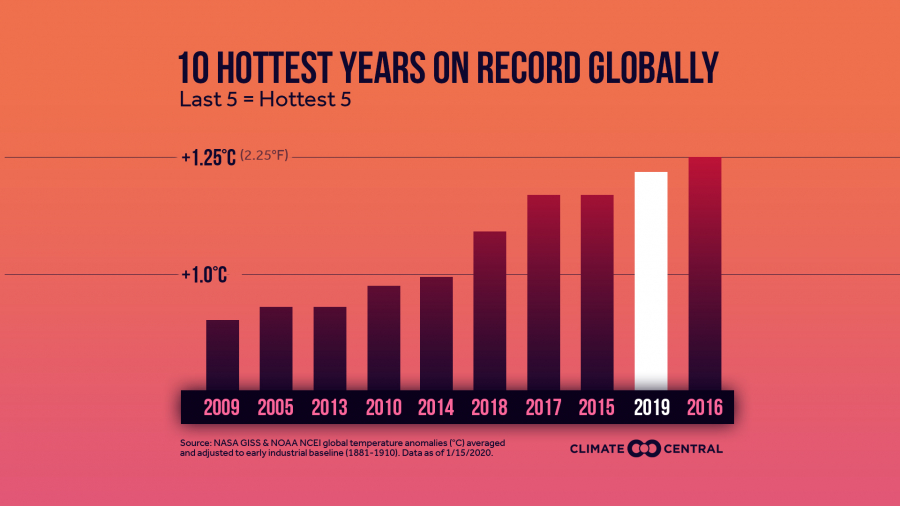 Graph Climate Central
A new report by NOAA is claiming 2020 has already a 75% chance of being the hottest year ever and knocking 2016 off the top of the list. Heat records have been broken from the Antarctic to Greenland since January. Disturbing patterns show the Northern Hemisphere has witnessed its warmest winter ever, as the U.S.  UK and Ireland, Europe and Russia all reported warm or record warmth for winter 2019/20. Across much of the United States, a warming climate has advanced the arrival of spring. TBW Europe recorded one of its mildest winters ever: France warmest winter in 100 years: Germany and Austria had their second warmest winter. Here in Holland once again, we saw no snow and the temp barely dropped under 0 deg C.

Yesterday the Met Office of the UK claimed that provisional early statistics show that for the UK as a whole was the sunniest April on record (figures dating back to 1929). Between the 1st and 27th of April 215.8 hours of sunshine have been recorded, 46% above the average for April, and beating the previous record set in 2015 of 211.9 hours of sunshine. This has been the result of persistent high-pressure systems over or close to the UK resulting in an extended spell of fine, dry and sunny weather since late March.

For most of April, a similar high-pressure system has been situated over the Gulf of Alaska, but it has now shifted into the western Lower 48 states, causing blistering heat will grip much of the Southwest and spread into the Rockies and Southern Plains this week, smashing records from California to Texas. According to Weather Underground, daily record highs starting falling in the Southwest last Friday and continued to be eclipsed into early this week. On Sunday, daily records were tied in El Paso, Texas (95 degrees); San Diego (88 degrees); and Tucson, Arizona (99 degrees). Phoenix recorded its first 100-degree day of the year Sunday, soaring to a daily record of 102 degrees. It reached 102 degrees again Monday. Midland, Texas, reached 100 degrees for the first time this year on Tuesday, and Death Valley, California, recorded its first 110-degree temperature of the year.

NOAA's report forecasting 2020 as the hottest ever.

Southwestern North America is in the midst of “the driest 19-year span since the late 1500s and the second driest since [the year] 800,” according to a new study in Science magazine. The area includes large areas of the western United States, extending from California, Arizona and New Mexico north to Oregon and Idaho, The Washington Post notes.

On Germany’s annual “Day of the Tree”, Chancellor Angela Merkel used her weekly video message to highlight a growing threat from climate change. According to Reuters, the last two exceptionally hot and dry summers have weakened millions of trees, undermining their defences against the bark beetle, which can be fatal to ancient woodlands. And after an exceptionally dry April, with summer still two months away, a forest fire has already had to be put out near the town of Gummersbach in western Germany this week. “We’re already noticing these days that it’s not raining enough in many areas of Germany,” Merkel said. Danny Ohnesorge, head of the Association of the German Wood Industry, told German radio there had been only 5% of the usual rainfall in April and that, if the drought continued, trees could die en masse. Concern has been mounting in recent years about the impact of climate change on Germany’s heavily forested landscapes, scene of many of its Romantic myths, legends and fairy tales.

we are in a global climate emergency.
here is the solution:

zzz
get rid of google "captcha", it s designed to illegally track
and record location and ip address forthe nsa.