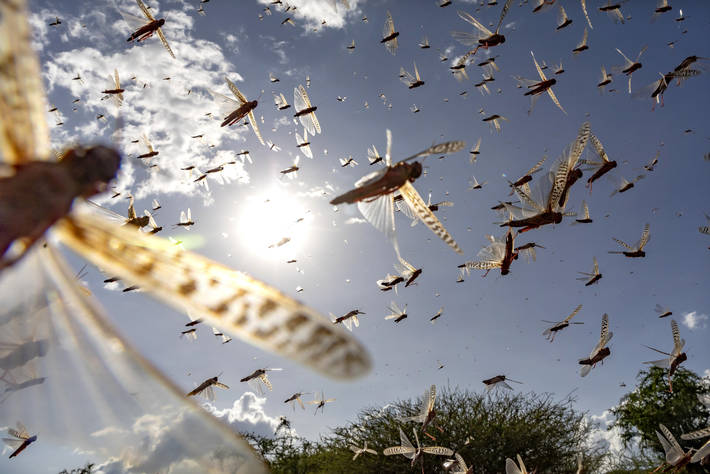 Swarm increase expected in East Africa Widespread rains that fell in late March could allow a dramatic increase in locust numbers in East Africa, eastern Yemen and southern Iran in the coming months.

EAST AFRICA The current situation in East Africa remains extremely alarming as hopper bands and an increasing number of new swarms form in northern and central Kenya, southern Ethiopia and Somalia. This represents an unprecedented threat to food security and livelihoods because it coincides with the beginning of the long rains and the planting season. Although ground and aerial control operations are in progress, widespread rains that fell in late March will allow the new swarms to mostly remain, mature and lay eggs while a few swarms could move from Kenya to Uganda, South Sudan and Ethiopia. During May, the eggs will hatch into hopper bands that will form new swarms in late June and July, which coincides with the start of the harvest.

● KENYA. Swarms appear to be increasing in size in some central and northern areas with some moving westwards.

● ETHIOPIA. A large swarm was reported in the south (SNNPR) today, April the 8th).

● UGANDA. Several immature and maturing swarms appeared in the northeast (Katakwi, Amuria, Agago districts) on 5-7 April. The military carried out control operations. Additional swarms may appear in these areas from Kenya and move towards the northwest.

ARABIAN PENINSULA Spring breeding is underway. The situation in Yemen continues to deteriorate.

● YEMEN. An immature swarm was seen on the coast at the Oman border and another one north of Aden, and adults are laying on the eastern plateau.

● OMAN. Control underway against hopper and adult groups in the north. A few immature adult groups were seen in the south.

● IRAN. An increasing number of hopper bands are forming along the southern coast from earlier swarm laying. 9 April 2020, Rome - The Food and Agriculture Organization of the UN is continuing its efforts to contain the Desert Locust upsurge in East Africa despite restrictions on the movement of personnel and equipment resulting from the COVID-19 pandemic. The Desert Locust upsurge continues to remain alarming, particularly in Ethiopia, Kenya and Somalia, where it poses an unprecedented threat to food security and livelihoods. In the six East African countries worst affected or at risk of locusts - Ethiopia, Kenya, Somalia, South Sudan, Uganda and Tanzania - around 20 million people are already experiencing acute food insecurity, and a further 15 million in Yemen, which is also being affected by the pest.

Widespread rainfall in March is expected to produce a dramatic increase in locust numbers in East Africa over the coming months, with new swarms expected to move from Kenya into South Sudan and Uganda. The situation is also worrying in the Islamic Republic of Iran and Yemen where a new generation of locusts is emerging. Restrictions on the movement of personnel and equipment imposed by COVID-19 have created challenges but FAO is continuing to work with national governments, farmers and agricultural producers to contain the outbreak. "There is no significant slowdown because all the affected countries working with FAO consider Desert Locusts a national priority," said Cyril Ferrand, FAO's Resilience Team Leader for East Africa. "While lockdown is becoming a reality, people engaged in the fight against the upsurge are still allowed to conduct surveillance, and air and ground control operations." FAO is augmenting national efforts by providing support for surveillance as well as aerial and ground spraying being conducted in 10 affected countries.