Brazil: Nearly 3 months rainfall in 12 hours kills 18 people with more than 30 missing São Paulo: This is the second major flood event to hit Brazil within the last few days. 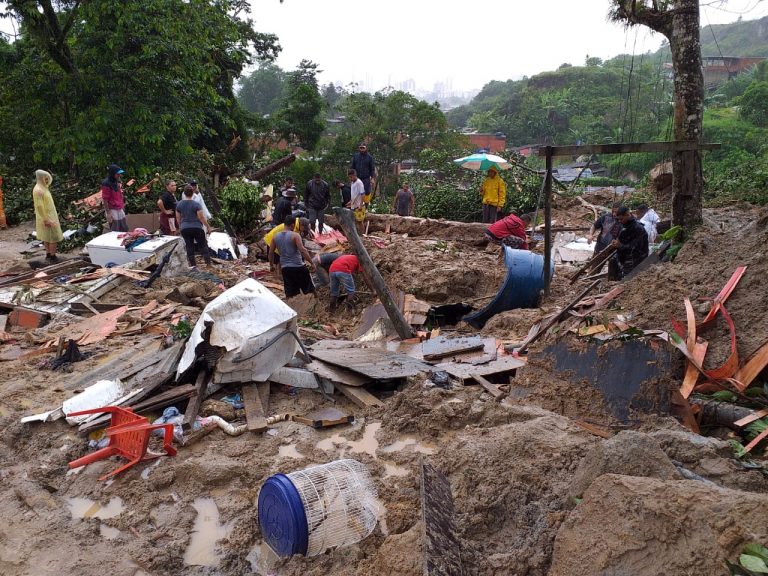 At least 18 people have died and many more are missing after a storm and torrential rain hammered the coastal Baixada Santista region of São Paulo state, Brazil

State Civil Defence said that some areas recorded over 280mm of rain in just 12 hours (the average rainfall per month is 160.5 mm). Among the worst-hit are the cities of Guarujá, Santos and São Vicente. Roads have been blocked by fallen trees or landslides and houses damaged or destroyed. Dozens of people have been displaced, including 156 in Guarujá and 18 in São Vicente. Civil Defence said that as many as 30 people are missing, raising fears the toll could rise further.

15 fatalities had been reported in Guarujá, with 22 people still missing. Two people died in Santos (6 people missing) and one in São Vicente (2 people missing). Relief supplies including mattresses, blankets, food and water have been distributed to affected areas. This is the second major flood event to hit Brazil within the last few days. Floods and landslides caused death and destruction in Rio de Janeiro from 29 February. As many as 5 fatalities have now been reported as a result. Floodlist

2 Chronicles 7:13
“If I shut up heaven that there be no rain, or if I command the locusts to devour the land, or if I send pestilence among my people;”
2 Chronicles 7:14
“If my people, which are called by my name, shall humble themselves, and pray, and seek my face, and turn from their wicked ways; then will I hear from heaven, and will forgive their sin, and will heal their land.” this why the corono virus has been Sent by God to Judge People from their Wickedness....

Ironically, it does happen in places that have moved away from God. In areas where the 7 sins run rampant and lawlessness abides. Tornado in Nashville, TN, is God touching US to turn to Him while there's still time. 🙏

God did not release the Covid-19 on Humanity a person from the the Level 4 Biological Weapons Lab in Wuhan China did.
The rain fall in Brazil and Queensland and the 6meters of snow on Iran a couple of weeks ago are all great examples of Weather Warfare. Period.
Ignorance + Apathy = Extinction

God did not release the Covid-19 on Humanity a person from the the Level 4 Biological Weapons Lab in Wuhan China did.
The rain fall in Brazil and Queensland and the 6meters of snow on Iran a couple of weeks ago are all great examples of Weather Warfare. Period.
Ignorance + Apathy = Extinction

Wow Gary. Are you afraid of the truth? In order to find the truth you have to look for it. Ignorance of the facts will not save you from reality.

I have found the Truth thank you, Christopher.

Thank You Gary. We are all in this together and it will not be easy. Take Care.