An extreme winter event, known as "dzud" which can wipe out more than a million livestock in one season has hit Mongolia once more killing 55,700 animals so far this winter 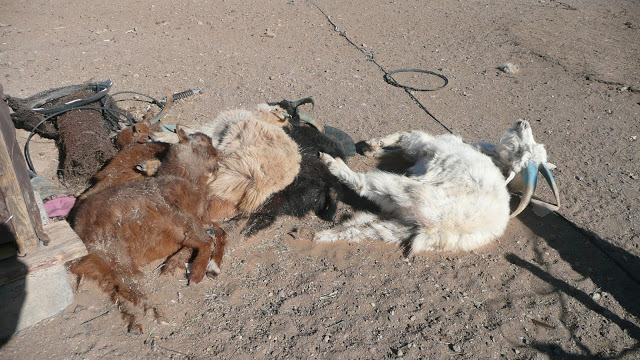 Goats that died as a result of a "black" zud. Gobi desert, March 2010/ Credit Wikipedia.

An extreme winter event, known as "dzud" which can wipe out more than a million livestock in one season has hit Mongolia once more. in Mongolia...

Extreme wintry weather, known as dzud in Mongolia, has killed more than 55,700 livestock animals in the northwestern province of Khuvsgul alone since late last year, the provincial agricultural department said Monday. "Dzud" is a Mongolian term to describe the frigid winter that comes after a dry summer and causes the death of great numbers of livestock due to starvation or cold weather. "A total of 55,764 livestock animals have died in 11 districts of our province since late last year due to the severe wintry weather. Heavy snowfalls have hit the province 16 times since the beginning of November," the department said in a statement. Animal husbandry is the backbone of the country's national economy, with nearly 40 per cent of the nomadic population depending on it for their livelihood. XINHUA

Thousands of herders lose their animals almost every year due to dzud, with more than 1 million animals dying due to it in 2016 and 2018. TBW