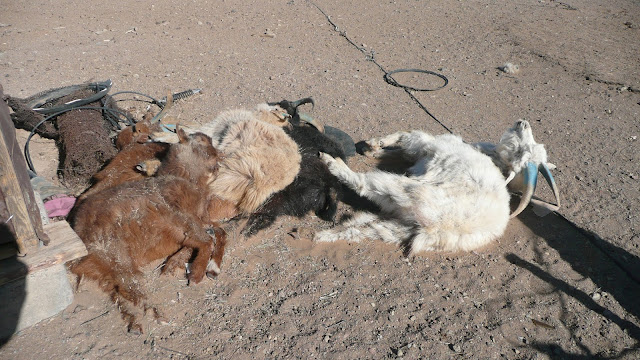 Spare a thought for Mongolia, with temperatures dropping as low as −30 °C (−22 °F) the Mongolian National Agency for Meteorology and Environmental Monitoring has declared the winter a "dzud".

A total of 800,000 animals have died so far this year in Mongolia due to the extreme wintry weather is known as "dzud", the country's meteorology service said Wednesday.

The dzud is a brutal weather phenomenon in Mongolia where a dry summer followed by a frigid winter kills vast numbers of livestock either by starvation or cold.

Snowfall covered up to 50 percent of the country, with 66 administrative subdivisions in 12 provinces experiencing dzud or near dzud conditions, Mongolian National Agency for Meteorology and Environmental Monitoring said in a statement.

Among the provinces, Khovd and Uvs in the west, Khuvsgul in the northwest, as well as Khentii in the east registered the highest rates of animal death.

Nearly 40 percent of the country's nomad population is dependent on animal husbandry and rain-fed agriculture for livelihood.

Thousands of herders lose their animals almost every year to the dzud, which forces them to seek new opportunities in the capital city of Ulan Bator. In 2016, more than 1 million animals were killed by the dzud according to Xinhuanet.com