The next monster is rolling in from the Atlantic: 200 mph Jet Stream is pushing Storm Ciara causing hurricane-force winds toward Ireland, UK and Northern Europe this weekend 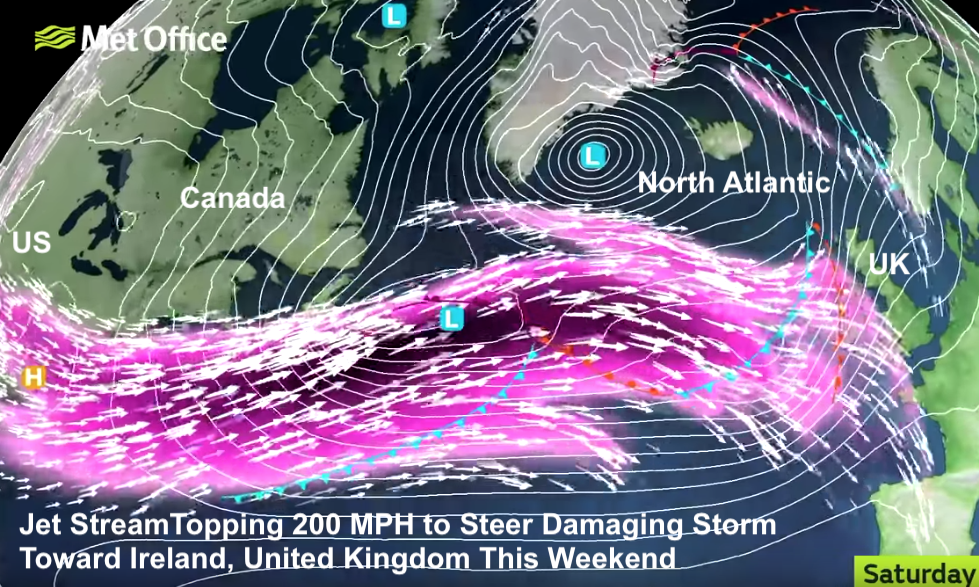 Many parts of Europe have been enjoying summer temps in mid-winter in the last week with Puerto De La Cruz topping the list with a mighty, 30 deg C, (86 deg F) and Valencia hitting 29.4 deg C, (85 deg F) almost double the average temperatures for the time of the year, smashing the old record of 27 deg C, (80 deg F). The Big Wobble but that is about to change as another monster storm is rolling from the Atlantic this weekend.

This system, which has been named Storm Ciara by the U.K. Met Office, will arrive in Ireland and the U.K. with rain and strong winds Saturday night into Sunday. It will spread across other parts of northern and central Europe into Monday. Storm Ciara will be driven by a jet stream with winds of more than 200 mph over the North Atlantic. The jet stream is a narrow ribbon of strong winds about 30,000 feet high into the atmosphere. It helps develop and steer weather conditions where we live on the Earth's surface and is also where most commercial jets fly (hence the term). Northern parts of mainland Europe will have strong winds as well, potentially including parts of northern France, Belgium, The Netherlands, northern Germany and Denmark. Weather News

The system currently developing in the North Atlantic will bring strong winds and heavy rain across the whole of the UK and parts of Europe through the end of the weekend and into the start of next week. Wind gusts will widely reach 50-60mph across many inland areas. The strongest gusts in exposed locations could reach 80mph. A Yellow National Severe Weather warning for wind has been issued which currently covers the entire UK and is in force from 6pm on Saturday evening and all day Sunday until midnight. Storm Ciara can be expected to bring a range of disruption which may affect some power supplies and transport services across many parts of the UK. Met Office