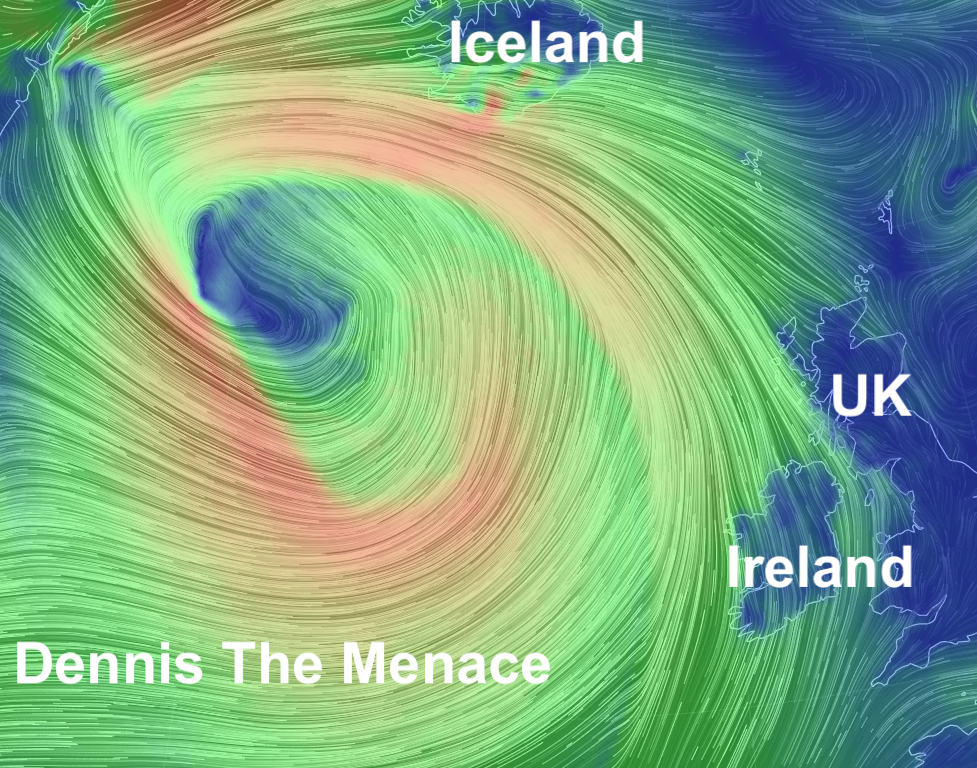 Storm Dennis is being dubbed "Dennis The Menace" by the storm-weary Britts after the famous cartoon character. 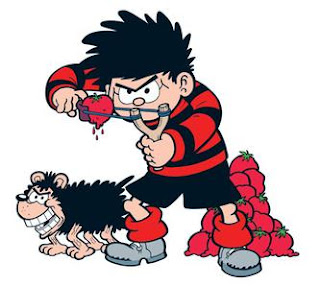 You couldn't make this up! Two huge extra-tropical cyclones are fighting it out, one over the North Pacific and another over the North Atlantic. Storm Dennis The Menace, (the one in the Atlantic) is set to rival some of the most intense North Atlantic storms on record and comes just days after Storm Ciara pounded Western Europe killing 8 people.

The past months have seen extraordinarily rough weather along the North Atlantic. Earlier this week came another never before seen phenomena. The air pressure dropped to a level not seen before. According to the Norwegian meteorological institute, the air pressure across major parts of the region fell below 940 hPa, a level so low it grounded flights in Norway and at the moment Storm Dennis the hPa level is even lower at 934, see map below. But these are anomalies are just the tip of the iceberg, pardon the pun.

Ice coverage in the Arctic Ocean is currently the highest it has been since 2010 with support from the strongest polar vortex on record. Ice covers 5.4 million square miles of the Arctic – roughly the size of the United States, Mexico and India combined. This coverage is still below the long-term climate average, but the uptick is at least a temporary stall in sea ice decline according to the Weather Channel 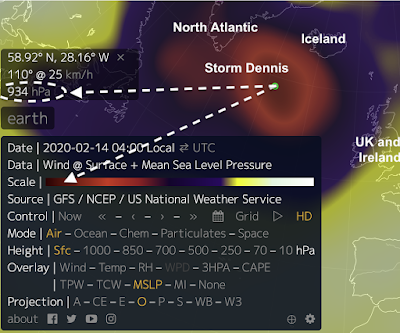 But that is where the cold ends because if we flip poles scientists in Antarctica has recorded a new record temperature of 20.75 deg C, almost 70 deg F, breaking the barrier of 20 degrees for the first time on the continent, a researcher said Thursday (Feb 13). "We'd never seen a temperature this high in Antarctica," Brazilian scientist Carlos Schaefer told AFP. This new record beats the old record which was set just last week! An Argentine research base, which is called Esperanza, on the northern tip of the Antarctic peninsula, set a new record temperature of 18.3°C,  This beat the former record of 17.5°C, which was set back in 2015.”

Yesterday, NOAA claimed January 2020 was the warmest January ever recorded going back 141 years. What’s more, the temperature departure from average was the highest monthly departure ever recorded without an El Niño present in the tropical Pacific Ocean. January 2020 marked the 44th consecutive January and the 421st consecutive month with temperatures, at least nominally, above the 20th-century average. Full Report Here

The past months have seen extraordinarily rough and mild weather in Europe, despite the storms. In January numerous stations recorded around 1050 mbar across southern England and Wales, almost up to 1049 mbar in southeast Ireland. Atmospheric pressure continued to rise across central Europe and the Balkans where 1047-1049 mbar was reported. Very high, near record-breaking values also across Benelux!
Earlier this month many parts of Europe enjoyed summer temps in mid-winter with Puerto De La Cruz topping the list with a mighty, 30 deg C, (86 deg F) and Valencia hitting 29.4 deg C, (85 deg F) almost double the average temperatures for the time of the year, smashing the old record of 27 deg C, (80 deg F).
Extreme warmth across the southern half of Europe brought exceptional temperatures across Spain, southern France, and NW Italy. Dry Foehn winds resulted in extremely high early February values with locally 26-28 °C peak afternoon temperatures. Turin and Cuneo in NW Italy reached almost +27 °C – the hottest temperatures ever recorded in Piedmont region (NW Italy) during winter! Southern Switzerland stopped at +24 °C while Valencia reported +28.4 deg C, (83 deg F)! That is *exceptional* for this period. There will be the final day of extreme warmth tomorrow before colder air mass spreads from the north and brings back winter with snow cold into the Balkans through mid-week. Severe Weather Europe

It's not just Europe who have had an incredibly warm beginning to 2020. According to NOAA, all 48 contiguous states saw above- to much-above-average temperatures last month. The new year kicked off with a balmy start for the U.S., making January 2020 the fifth warmest January on the 126-year record. However, NOAA claimed January was also a wet month, continuing the trend of 2019 which was the third wettest period ever.
So far in 2020, over 5,500 daily warm records have been tied or set, trouncing the number of cold records. For the first 40 days of the year, through Feb. 9, NOAA's Daily Weather Records website showed 2,421 daily record highs, meaning the highest temperature on record for a given location on that particular day, were tied or set in the U.S. Another 3,148 daily record-warm lows, meaning the warmest low temperature on a given day, were also tied or set so far this year, for a total of 5,569 daily warm records to start the year. By contrast, there were only 307 daily record lows and 481 daily record-cold highs tied or set during that same 40-day stretch. The Big Wobble

January has shown us some crazy swings too: Denver's 74 deg F (23 deg C) was the warmest in almost 100 years then suddenly dropped to below freezing and 5 inches of snow in less than 24 hrs. And temperatures in Tasmania, Australia went from 40 deg C, (104 deg F) to snow in 24 hours.