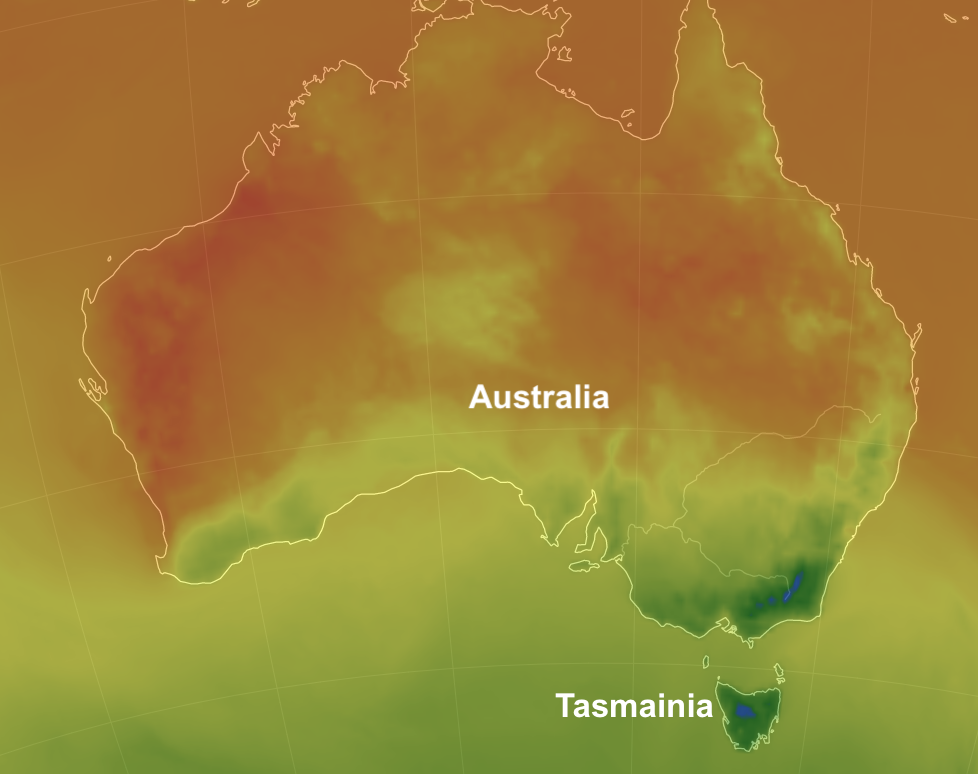 A family's Hobart holiday goes from 40C to snow in 24 hours Adrian Van Beek when his family decided to escape the hot Brisbane summer and take a holiday in Hobart but when they arrived, they were hit by opposite extremes.

Hobart's temperatures spiked at 40C (104 deg F) last Friday, close to its hottest ever day of 41.8C in 2013. "On the first day, we'd planned to go up the mountain, but it was so hot that we couldn't," Mr Van Beek told Nine.com. The next day, Mr Van Beek and family set off to enjoy a cooler day only to get caught in major snowfall and temperatures of -1C (30 deg F), on Mount Wellington overlooking Hobart. "When we drove up we saw there was snow already on the trees and on the grass, and then this cloud just came over us and we couldn't see anything, it was completely white, and 10 minutes later it was snowing," he said. "We were able to pick up the snow and throw it at each other." 9News

Of course, thank you, typo

Now how can the temperature (its summer there) go from 104 f degrees to the 20's with snow in 24 hr's.......in summer?!!! Hello... The only possible way that can happen is man. That is impossible naturally and how many more events like this will it take for people to wake the frig up!!? How many more!!!!!???? This is geoengineering on steroids. They are decimating our atmosphere and climates with this BS and frankly I have had more then enough. I wonder how many more winters and summers we have to keep enduring this nonsense big fat secret that is visible with your naked eyes!?
Here in FL it is colder then you are Gary. Another impossibility naturally. I honestly can not stand it anymore, ten long years I have known the the truth of geoenginerring and I hate it. The cold is so abnormal it hurts. Your legs ache, your joints ache, everyone complains of these things not realizing why they feel like shit. To make matters worse, which is what the powers that be do all the time, here in FL they just released hundreds of thousands....?, millions....? ...of genetically modified moths in to the environment. Fake bugs, fake weather, fake food, fake news, fake money, everything is fake! Do you realize this? If not for all the fake stuff we would already be dying from heat, storms, and NO food. That is why everything is fake you know, because the real stuff has been killed by man. We are already in food crisis, GMO foods are majority now because real food, Gods creations, won't grow anymore. Every time another life forms ceases to exist due to the chemical poisoning we endure everyday, they replace it with a laboratory version to interact with nature and fool people. We had millions of fake bees released last year. Now moths. Why? Because nature is completely out of sync and man thinks he can keep it going with frankenfood and insects and weather. Sorry for the rant but I have had enough already!! When does this evil end and go to hell?! Thanks Gary for all you do.

We haven't had one single frost this winter. When I first came here in 1997 We skated on the frozen canals every winter, now it doesn't even snow anymore. Plant buds are opening and flowers blooming, two months before they should be. It was nearly 30 deg C in Spain over the weekend. Explain to me Hawkeye, why are they doing this (who) and why?

Here is Holland by the way

yes Hawkeye,we here in pa agree with all you say.We are seeing it everyday and remember the bible says "we will be destroyed from within" which means we will destroy ourselves.We are just trying to get through it all until the Lord's day.I'm not that old but have never felt that way in my life before.But the greed in this world is unbearable now.

Hawkeye - I feel your pain and agree with you..here in Alberta Canada - the weather warriors have totally destroyed our weather too - of course it is notoriously hard to predict weather just east of the rockies however the weather warriors were so off the mark for their forecast - they had to come up with reasons why - hilarious actually - no snow predicted for the week - so we wake up to 15 cm - then they say that was an anomaly no more for the week and it snowed yesterday - then they say above normal temperatures and it is - 18 this AM - you cannot make up this madness - completely out of control their manipulations - of course some blind fools think it is climate change -not the tons and tons of toxic material dumped on us

Gary, thanks for your reporting.
You asked, 'Why are they doing this?' - If you check out the www.geoengineeringwatch.org site, you will find that there are several credible potential reasons. And it's likely that there are more than one reason for this being done.

Hi Gary and others. My apology for not quite being able to move on until I answer your question who and why is behind Geoengineering. Last Month I finished reading a book by Elena Freeland called "Chemtrails, HAARP, and the Full Spectrum Dominance of Planet Earth" in which she lays out the History, the Government's, Militaries and Corporations invoved, the Nano Metals, Polymers and Chemicals used as well as the multiple reasons why they are spraying and what Earth Systems are being affected. In short there is a global dimming effect, as well as several Military uses. The US Military and other Militaries have weaponised the weather. Here are two statements I have coined. Climate Change = Climate Control = Weather Warfare = Disaster Capitalism. I hope that makes sense.
Coin #2 Ignorance + Apathy = Extinction
Elana's book is the first of a trilogy that can be purchased on Amazon. I have a great deal of respect for her and her research. I hope you all will read her book mentioned above. Fair Warning it is disturbing at every level. Take Care.
Christopher

Rubbish, you still don't answer my question, WHY?

SOME considerations: To confuse the populations as to the true state of climate collapse of the planet. The climate is going in only one direction, VERY HOT, geoengineering has succeeded for over 7 decades now in hiding this fact from populations. Why do they do this? Because if populations understood where this climate implosion is taking us, they would demand a rapid change in our energy usage, no more fossil fuels. Why is this such a no-no for the elites? Because as of 1973-74 the US dollar is only backed by its stranglehold on the oil markets. Why is this such a big deal for the central bankers? Because the day we stop using fossil fuels for energy the US dollar worth is 0, and they can not control renewable energies in the way they control fossil fuels. PLUS they use climate as a weapon, creating floods such as the one in operation Popeye in the Vietnam war, droughts such as those denounced by Iran in the UN or the weather they please wherever they please. A weapon that allows for "plausible denial", countries that claim they are being attacked (such as Iran) are not perceived as credible by the US controlled media and the brainwashed population.

The US Military wants full spectrum dominance of the Weather, Nature and Humanity. There are several layers to this onion and they all stink. Don't believe me. Read Elana's books and all of your questions will be answered with vetted documentation. We may just have to agree to disagree. No offense intended.
Christopher