Bahrain is the latest country to be invaded by the Locust Plagues: Swarms of locusts darken the skies in Bahrain as they move eastward toward China (Videos) 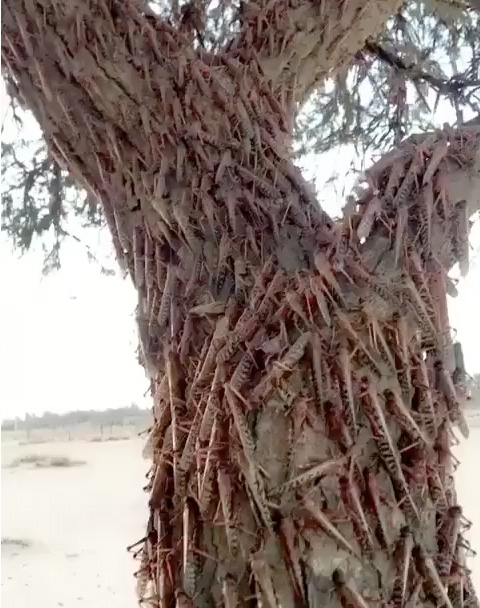 A huge swarm of locusts stopped traffic on a major highway in Bahrain yesterday, as the insects entered the country on high winds, ironically coming back home to the region where the original plague began back in January 2019.

Terrifying videos on YouTube show the insects landing on car windscreens as a large column flies overhead. The swarm is thought to have spread from Saudi Arabia, where they had been seen in regions including Riyadh, Mecca and Qassim because of strong winds.

Back in January 2019, the Great Mosque in Mecca, which hosts millions of Muslim pilgrims every year and is the holiest site in Islam was hit by a plague of locusts which is thought to have been the origin of the massive plagues now stretching from South Africa to China's Western border. TBW

The locust plagues are destroying crops and economies of the worlds poorest nations
The worst locust outbreak in nearly a hundred years is spreading fast. The FAO yesterday announced South Sudan and Botswana, the first southern African nation to have been invaded by migratory locusts and in a separate, report the locust plague has reached the Western borders of coronavirus-hit China, the area of the plagues are vast and the list of countries now affected is enormous. A small plague was first reported on TBW back in Jan 2019, ironically at the holiest site in Islam. The locusts were filmed swarming around the Great Mosque in Mecca. Since then the plague has stretched Eastwards from Saudi Arabia, through Iran, Afghanistan, India and Pakistan, Bangladesh and on to the Western border of China. Westwards from Saudi Arabia into Egypt and then South into the Horn Of Africa and all the way down to Botswana in the South, passing through Sudan, Eritrea, Ethiopia, Somalia, Kenya, Tanzania, Zambia, Mozambique and Uganda. Thousands of miles of crops have been destroyed in just 13 months. TBW

Swarms of locusts darken the skies in Bahrain as they move eastward toward China. The pests have been responsible for devastating crops in parts of Africa, and the UN warned that the locusts were placing “millions at risk of hunger.”

So sad to see and think of the famine that these locusts will bring. Not much mention in US news. Reminds me of Egypt plagues and the plagues mentioned in revelations. It seems only those of us who have placed our hope in Jesus and been born again can see the writing on the wall.