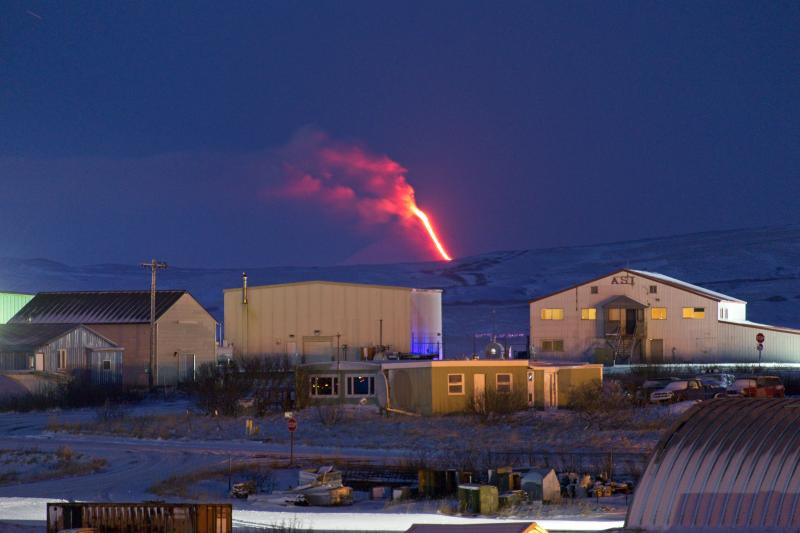 An Alaska volcano that has been rumbling since midsummer shot ash about 5 miles (8 km) into the sky on Sunday, triggering a warning to aviators and dusting one small fishing village, officials reported. The volcano is on Unimak Island, the largest island on the Aleutian chain, 120 miles northeast of Unalaska Island. It’s about 700 miles west of Anchorage.

Shishaldin Volcano, one of the most active in Alaska, kicked out a plume of ash that satellite imagery detected as high as 28,000 feet (8,535 m) above sea level, according to the Alaska Volcano Observatory, the joint federal-state-university office that tracks the state’s many volcanoes. The plume stretched about 90 miles (145 km) as of midday, blowing mostly east and over the Gulf of Alaska, said the observatory. A sprinkling of ash was reported in the tiny Aleutian village of False Pass, about 23 miles (37 km) northeast of the Shishaldin, said David Fee, the observatory’s University of Alaska Fairbanks coordinating scientist. Reuters

The first volcano eruption of 2020 belongs to the Shishaldin Volcano

The first volcano eruption of 2020 belongs to the Shishaldin Volcano, Alaska's colossus shot a cloud of ash more than 5 miles high on the 3rd of January 2020. The volcano in Alaska’s the Aleutian Islands began erupting Saturday morning with a pilot reporting an ash cloud estimated as high as 24,000 feet. Shishaldin Volcano, which erupted briefly last month, was sending up a cloud of volcanic ash that was moving southeast at 50 knots, the National Weather Service said.