It's called a "mega blaze" and parts are "too big to put out"it is now in close proximity to major population centres of Greater Sydney: 45 deg C, (113 deg F) Temps for QLD 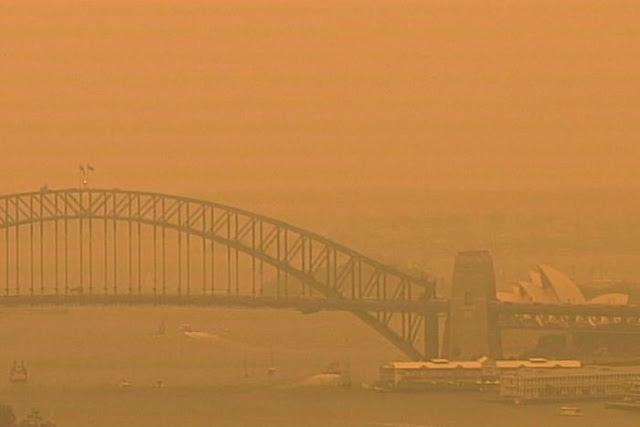 A 60-kilometre fire front is ravaging areas north of Sydney, as more than 100 blazes take hold amid deteriorating weather conditions. The Bureau of Meteorology (BOM) warned "some fires were too big to put out" and the level of smoke was such that it was showing up on its radar as rain. The cause and the effect. They are all in a 60-kilometre stretch that runs from the Colo area in the Hawkesbury, north of Sydney, all the way up to near Singleton. There is just fire that whole way.

More than 680 homes have been destroyed by bushfires in NSW this season, the RFS confirmed. Almost 250 houses have been damaged, while more than 2,000 outbuildings have been destroyed or damaged. The updated totals came as the blazes burning north-west of Sydney joined to create what has been dubbed a "mega blaze" on Friday morning.

"We have seen the fire is coming very close proximity to major population centres, whether it is on the South Coast, Central Coast, or even Greater Western Sydney," Ms Berejiklian said from the RFS control room in Sydney. "We know there have been some property losses, the extent of which won't be known until the fire conditions are safe for people to go in and have a look, but we also appreciate that many families and many people have been asked to leave their homes and we can appreciate what a scary time this is for many people." ABC

Meanwhile, the Roaring 40s return as heatwave peak is set to hit south-east Queensland bringing temperatures close to 45 deg C, 113 deg F. With nearly 50 fires burning across Queensland, conditions are set to get even more challenging as the heatwave persists into the weekend. The heatwave has arrived in eastern Queensland, with the mercury expected to go as high as 12 degrees above average and create severe fire conditions. The Bureau of Meteorology expects the heat to peak on Friday and Saturday. Brisbane Times