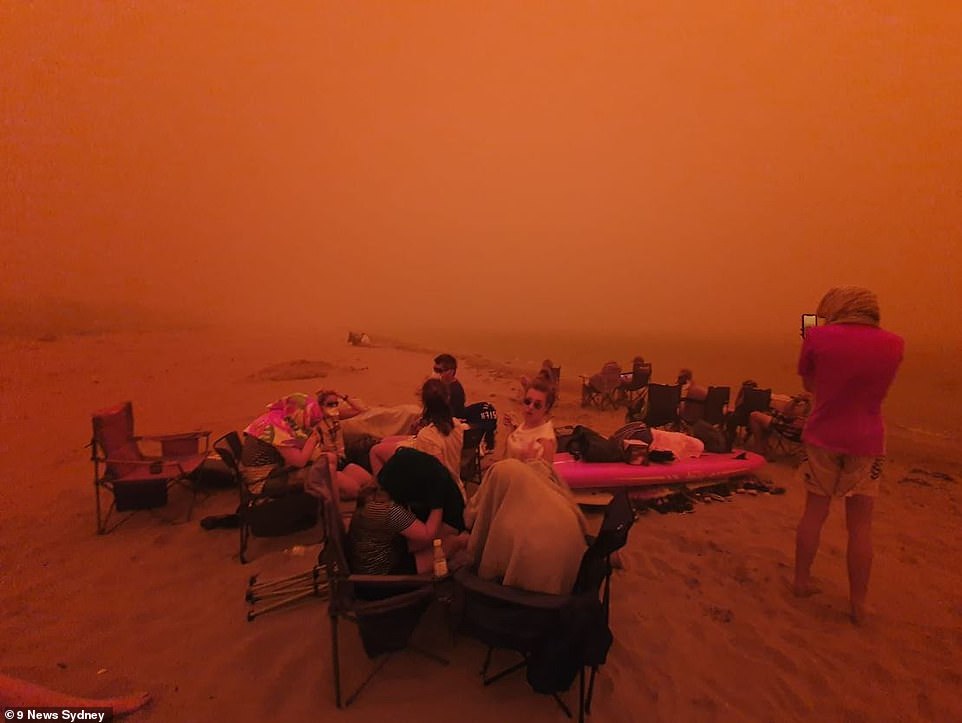 Photos show Batemans Bay residents surrounded by thick smoke as they wait on the beach: Credit 9News
Thousands of people who are trapped on the beach of a Victorian coastal holiday town are being told to go into the water as a devastating bushfire closes in. Authorities believe more than 4000 people are still stuck at Mallacoota, in the state's far east, which was hit by fire about 8.30am on Tuesday. There are four people unaccounted for and 'significant losses' to property in the East Gippsland region, and two people confirmed dead in New South Wales with another unaccounted for as a blaze tears through the state's south coast. In Mallacoota, the sky turned an eerie shade of black in the morning before transforming into a deep red, with residents reporting 'hot embers' falling from the sky and a deafening 'roar' as the fire approached. Residents heard gas bottles exploding as the fire edged closer to the town. Daily Mail 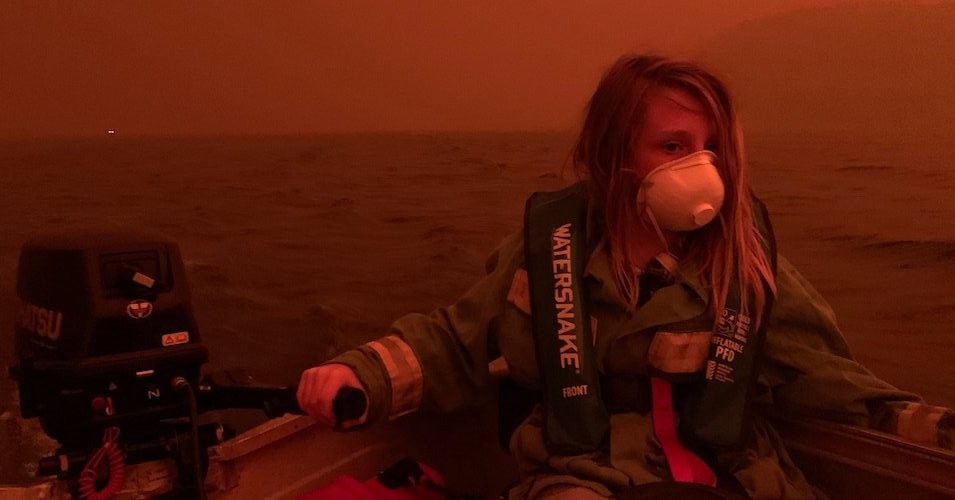 A mother and her kids are sheltering in their boat on the water near Mallacoota. (Photo: Nicole Asher/ABC Gippsland/Twitter)


Thousands have sought safety in the lake and ocean in a coastal town in Victoria's East Gippsland, fleeing an out-of-control bushfire. Extreme winds and embers have been threatening the CBD and access roads have been cut. The fire had reached the northern end of the town on Tuesday morning and about 4,000 people fled to the coastline, with Country Fire Authority members working to protect them. The town had not been told to evacuate on Sunday when the rest of East Gippsland was, and authorities decided it was too dangerous to move them on Monday.

The federal government has agreed to supply military vessels to Victoria for evacuations in coastal communities where people are trapped. The ADF will send Black Hawks, Chinooks, fixed-wing aircraft and navy vessels for firefighting support and evacuation.

RFS Commissioner Shane Fitzsimmons reports, “We have seen now confirmed eight civilian fatalities, three firefighter fatalities, and we have grave concerns for another civilian down in the southeast of NSW,” he says. “We have seen 1,000 homes destroyed and almost 4 million hectares of country burnt so far this season. We have still months to go this summer. Absolutely, this is one of the worst, if not the worst fire season we have experienced here in NSW.” 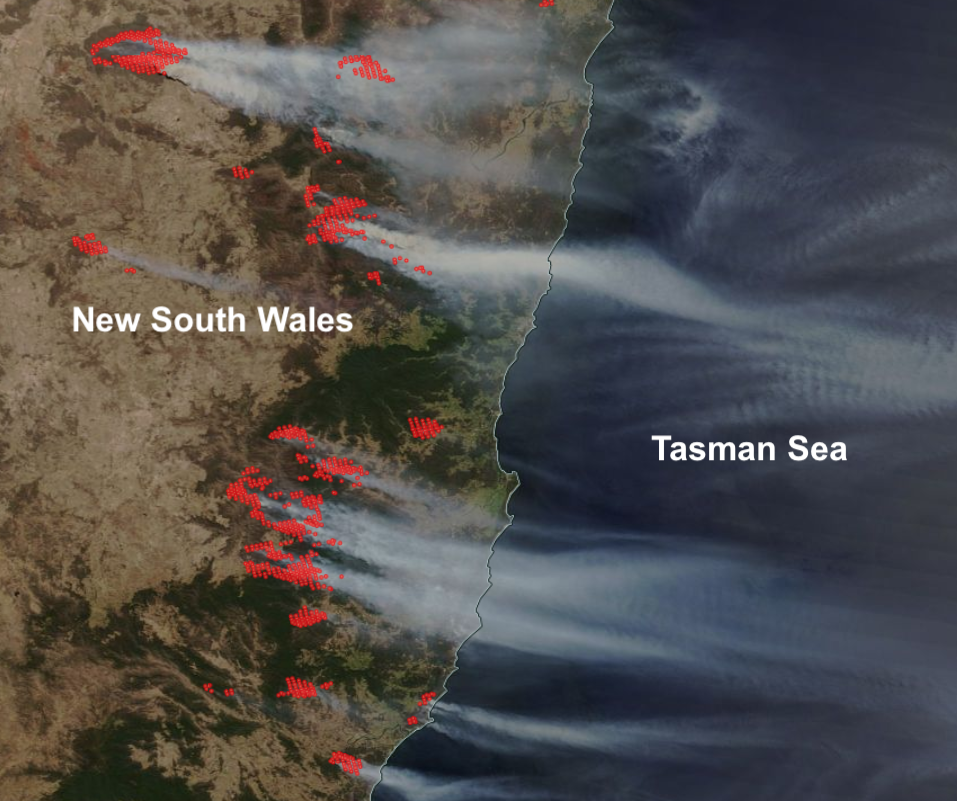 The Bureau of Meteorology says thunderstorms could make the NSW bushfire situation even worse, adding to soaring temperatures and gusty winds, AAP reports. Thunderstorms forecast to develop in NSW could make an already dangerous bushfire situation even worse, the bureau says. Bureau of Meteorology NSW state manager Jane Golding says the state is experiencing heatwave conditions on Tuesday with soaring temperatures, gusty winds and smoke pollution in many areas. Thunderstorms could exacerbate the situation later on if lightning strikes spark new fires, Golding told reporters on Tuesday afternoon. “Over the course of today we are expecting general thunderstorms to develop – they are going to cause a few problems around the fire grounds,” she said.

At 6pm there are 120 fires, 68 are not contained. Eight Emergency Warnings are in place. It has been a busy day for the 3,000 firefighters in the field. As the southerly change moves up the coast conditions continue to be unpredictable. Stay up to date. #nswfires #nswrfs

Towns in Bega Valley and Shoalhaven without safe drinking water By Eilidh Mellis The water supply in Bemboka is unusable, contaminated with ash from the Werri Berri fire northwest of Bega. Residents who have remained in the area are advised by Bega Valley Shire Council to access a temporary supply of drinking water at the Bemboka fire shed.

Temperatures to ease this week, before rising again on Saturday. After a horror day of bushfires that claimed several lives and dozens of properties in NSW, the weather is forecast to improve in the latter half of the week before conditions deteriorate again on Saturday. Western Sydney sweltered through its hottest ever December day on Tuesday, with a peak of 46.3 in Penrith recorded at 3.21pm. Towns along the South Coast, where the worst of the fires raged, hit the high 30s. Sydney Morning Herald