Aussie bushfire update! Incredible footage, 70m flames confront firefighters: Bushfires blazing out of control on opposite sides of the continent: Homes threatened in both Sydney and Perth 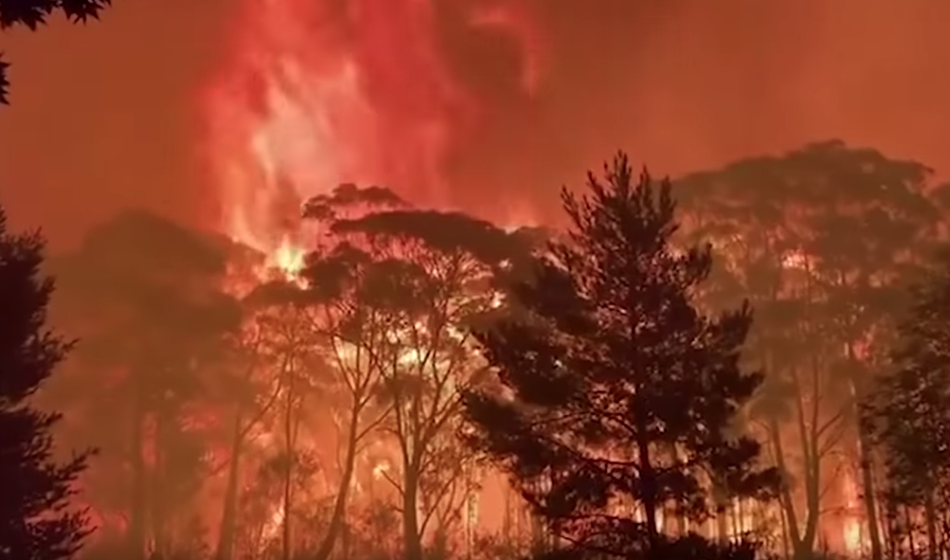 The ABC reported flames up to 70 metres high

Bushfires rage in New South Wales and Western Australia threatening homes Massive flames have been reported in a "mega-fire" north-west of Sydney that has jumped a creek and has consumed homes near a landmark.

Bushfires are blazing out of control on opposite sides of the continent with homes threatened outside both Sydney and Perth. More homes are thought to have been lost in the path of a major blaze in the Wollemi National Park, northwest of Sydney, where residents were told it was too late to leave. On Sunday, 106 bush and grass fires were continuing to burn across NSW, with 57 not yet contained. On Monday, total fire bans will be in place for five areas of NSW - Far North Coast, Central Ranges, New England, Northern Slopes & North Western.

In Western Australia, a new bushfire is threatening lives and homes in Mogumber, north of Perth. An emergency warning has been issued and residents have been asked to shelter.

Close to Sydney, residents faced an emergency warning for the Gospers Mountain blaze on Sunday. This huge fire was almost 370,000 hectares in size. The ABC reported flames up to 70 metres high had been seen and several homes in the Hawkesbury were lost. Others said the flames were up to 20 metres high.

In WA, firefighters are battling a blaze north of Perth, near Mogumber, that's already burned through almost 12,000 hectares. An emergency warning was issued and residents asked to shelter. The bushfire is out of control and moving fast in a north-easterly direction. Thousands of properties have been saved from another bushfire raging out of control at Yanchep, around 100 kilometres west from Mogumber, but authorities said the threat isn’t over. The Yanchep blaze remains at an emergency warning after firefighters protected more than 6000 homes from the near-12,000 hectare blaze. News.com.au

An incredible video, see below, shot by the Terrey Hills Rural Fire Service brigade shows immense flames near Mount Tomah on the northern edge of the Blue Mountains national park. The Gospers Mountain fire, which began six weeks ago, has become a mega blaze in which several fires have combined to the north and west of Sydney, covering almost 400,000 hectares and stretching almost from Lithgow to the NSW central coast. Temperatures well above 40C were forecast for western Sydney, other parts of NSW and several other states later in the week

xx
Australia is bracing for its highest recorded temperature ever which is currently 50.7C, (123 deg F)
Australia's nightmare summer is about to get worse, after the country's worst November in living memory suffering record-breaking wildfires, a crippling drought, toxic-smog and a long heatwave with temperatures above 40 deg C, (104 deg F) in many parts another record is about to be broken. The Aussies are bracing themselves from a hot air mass which will fuel another devasting heatwave and it is expected to top Australia's current record high temperature of 50.7C, (123 deg F) at Oodnadatta in SA, that record was set on January 2, 1960, which will fuel the deadly fires. Full story

The wildfires which started nearly a month and a half ago are only increasing in intensity with no ending in sight.
Wildfires