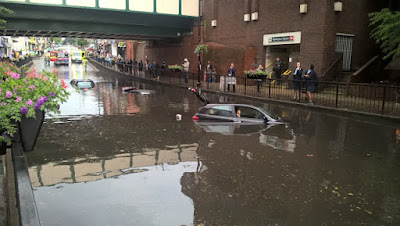 A super-charged jet stream has opened the gates to the fury of the Atlantic allowing a barrage of churning low-pressure systems to hurtle towards the UK since the end of September, causing unprecedented flooding and the devastation which is set to continue. As the nation reels from the latest barrage, Storm Atiyah, forecasters are warning of another mega-storm that will smash the flood weary country.

It joins a queue of frenzied low-pressure vortexes lined up in the Atlantic about to be steered toward the UK and western Europe by an unusually powerful jet stream. Arctic air pulled in by the storms will send temperatures plunging with crippling snowfall forecast in parts of the country according to the Daily Express.

The large cyclone is expected to hit the UK by late afternoon today as voters are heading for the poles in the country's general election. Voters are warned to look out for severe winds.

Right, the latest storm to hit the UK, today. Earthwindmap.

Yesterday a crane collapsed in South West London yesterday after the massive structural snapped in high winds as Britain was battered by monster 80mph gales and flooding. The crane appeared to "snap in half" as it crashed into a building in Kingston at around. Emergency crews were scrambled to the scene but there are not believed to be any injuries. The Met Police confirmed residents close to the development have been evacuated "as a precaution". One witness claimed the crane appeared to "snap in half" as it partially collapsed. It came as the Met Office issued four weather warnings across most of northern England and Scotland as the UK braces itself for another battering before Thursday's election. The highest wind recorded today was 78mph in Capel Curig, Wales as the Met Office warned of flooding to homes and business in Scotland. Up to 100mm of rain is also set to fall across parts of Northern England in just nine hours - two thirds the monthly average - with the bad weather causing travel chaos.
The latest storm to hit the UK, today.

The United Kingdom has been being drenched with torrential rains since the end of September, half of the average rainfall for November fell in a 24 hour period last month. October, November and so far December have been a disaster for the UK after persistent torrential rain. The rain started in late September when Storm Lorenzo brought strong winds to the west of Ireland before crossing the UK on 3rd October. Lorenzo was a mid-Atlantic hurricane but weakened rapidly as it tracked north-east past the Azores toward the west coast of Ireland. The storm followed a spell of unsettled wet weather across England and Wales during late-September causing disruption and flooding. Torrential downpours across parts of Wales, the Midlands and southern England on the 1st of October also brought localised flooding and disruption, it has continued to rain in some areas since then with hardly a pause.