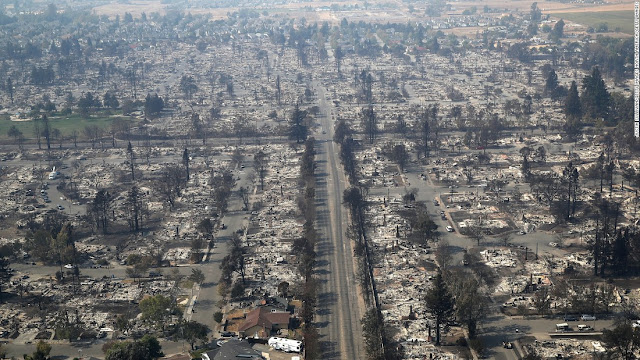 Thousands of people in California are being ordered to evacuate as wildfires spread, credit CNN

In November, record-breaking wildfires in Australia and California left hundreds homeless, record-breaking flooding in the UK, France and Italy and other parts of Europe left thousands more homeless. Unprecedented flooding in Central Africa left another million homeless along with the death of hundreds of people. Crippling droughts in Southern Africa and Australia will have left many more homeless. November 2019 was a month which will have changed the lives of millions of peoples forever and it took just 30 days to unfold. Extreme weather events are increasing dramatically, not year by year but month by month and yet, I have personally had to shut down the comment section on The Big Wobble because of people constantly posting abusive comments and claiming I am a liar, using vile words I wouldn't want to print here. Our climate is changing with every month new records are being broken, however, the number of people around the world who will passionately deny this is truly astonishing.

The recent onslaught of deadly heatwaves, unprecedented wildfires, devastating flooding, aberrant cyclones made more destructive by rising, warmer seas, crippeling droughts, devastated crops, massive deforestation, record-breaking ice melt on both poles and a 70% decline of wildlife, it is safe to say our planet is stressed out, leaving Sir David Attenborough last week to claim, "it is too late to stop climate change," we have crossed the point of no return, he went on to say, "our only hope is to slow climate change down somehow."


Climate fuelled disasters were the number one driver of internal displacement over the last decade, forcing more than 20 million people a year – one person every two seconds - to leave their homes, said Oxfam today. The contentious issue of financial support for communities, including displaced communities, which have suffered loss and damage as a result of the climate crisis is expected to take centre stage at the UN Climate Summit in Madrid from 2 – 13 December 2019.
Oxfam’s briefing ‘Forced from Home’ reveals that the number of climate-related weather disasters that result in displacement has increased five-fold over the last decade.  Today people are seven times more likely to be internally displaced by cyclones, floods and wildfires as they are by earthquakes and volcanic eruptions, and three times more likely than by conflict.
While no one is immune – in recent weeks wildfires in Australia and floods in Europe have displaced thousands of people – Oxfam’s analysis shows that people in poor countries, who bear the least responsibility for global carbon pollution, are most at risk. 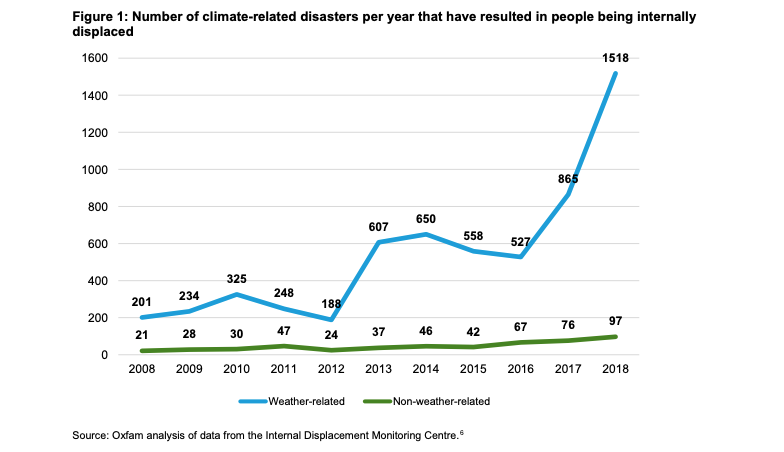