Storm Ezekiel: Severe weather for the Western United States has transformed to precipitation in the East: Record amounts of snow dumped over parts of U.S. 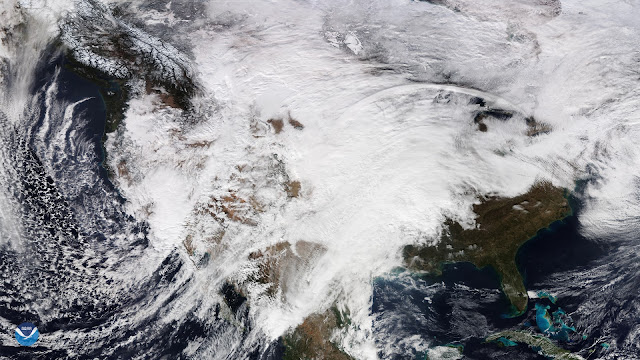 With the addition of the new snow we picked up the week of Thanksgiving, Great Falls has now set a new record for snowfall in a calendar year! Great Falls has now seen 119.3" of snow since January 1st, which is more than the previous record of 116.5", set back in 1989. That's nearly double the normal yearly average, which is 63.5" inches. We've still got the whole month of December to go, which means we'll likely see that total rise a bit before the year wraps up. 3KRTV

As Minnesota dug out of a weekend-long winter storm that turned holiday travel plans into nightmares, Duluthians had to dig the deepest. Nearly 22 inches of snow fell in a blizzard that left parts of the city “completely impassable” and shut down Interstate 35 south of town during the storm. The 21.7 inches that piled up by noon Sunday made it the ninth-largest snowfall over two days on record, said Justin Schultz, a meteorologist with the National Weather Service in Duluth. Star Tribune

Happening right now, Storm Ezekiel, snow is falling this morning across interior portions of the Northeast, from Pennsylvania into New York and New England. Rain showers are affecting areas closer to the coast near Interstate 95, but some of those areas should see snow develop later Monday. Portions of the central and southern Appalachians are also seeing snowfall from this storm. More than a foot of snow has already fallen in Albany, New York, since Sunday. The top Northeast snow total from this storm so far is 20.7 inches in East Glenville, New York. Boston, Hartford, Connecticut, and Providence, Rhode Island, all picked up their first accumulating snow of the season on Sunday. The worst conditions are likely in areas where winter storm warnings are in effect. Some locations in these warnings may be impossible to travel through. Albany and Syracuse, New York; Allentown and Scranton, Pennsylvania; Concord and Manchester, New Hampshire; and Portland, Maine, are among the cities under a winter storm warning. Boston, New York City and Philadelphia are under a winter weather advisory, which means snowfall could affect travel in these areas later Monday into Tuesday. The Weather Channel