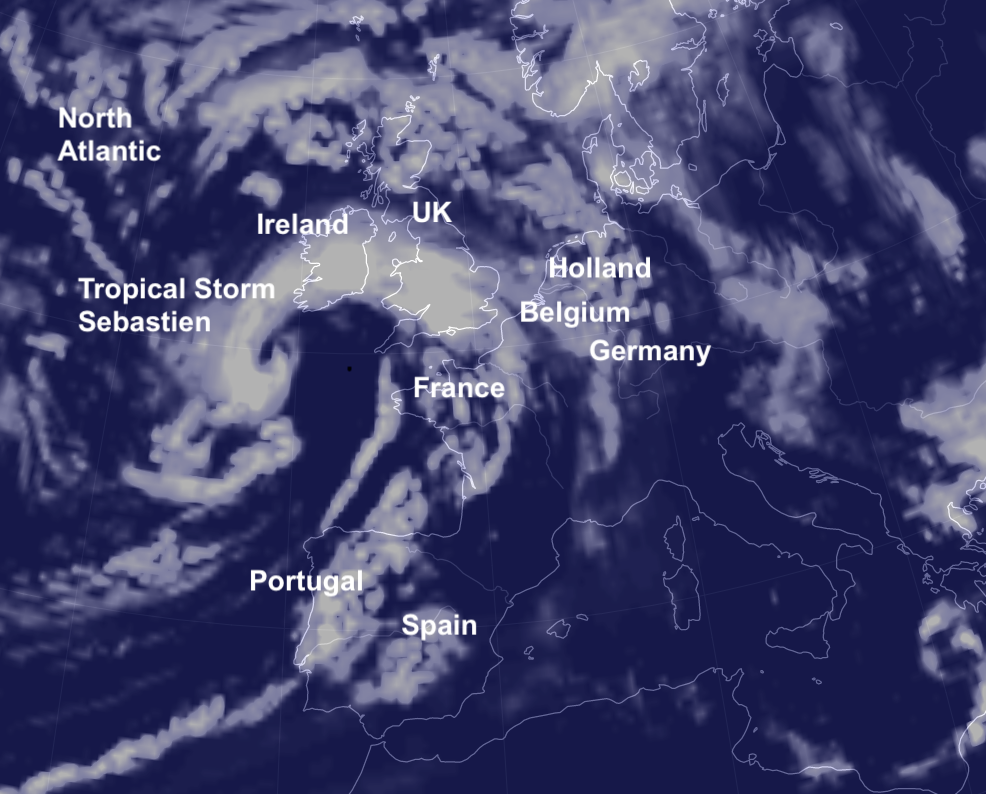 Earthwindmap, extra-tropical system Sebastien is set to roll in on Tuesday

The saturated and flood weary people of the UK and Western Europe are in for more trouble as the next massive low-pressure system, ex-tropical storm Sebastien will roll into the region by Tuesday.

According to Severe Weather Europe, Sebastien will begin deepening again and intensifying into a strong extra-tropical cyclone moving towards western Europe. It is now increasingly likely to deliver a severe windstorm and major waves into parts of S British Isles and NW France. Sebastien is now being affected by around 40 knots of deep-layer shear and cool sea surface waters of around 20 °C and will behave as an extra-tropical system today. Sebastien is forecast to only gradually lose its strength over the next 48 hours and is expected to deliver gusty winds and heavy rains over the Azores tonight while rapidly crossing nearby to their north.

Meanwhile, November has been a disaster for the UK after persistent torrential rain. The rain started in late September when Storm Lorenzo which brought strong winds to the west of Ireland before crossing the UK on 3rd October. Lorenzo was a mid-Atlantic hurricane but weakened rapidly as it tracked north-east past the Azores toward the west coast of Ireland. The storm followed a spell of unsettled wet weather across England and Wales during late-September causing disruption and flooding. Torrential downpours across parts of Wales, the Midlands and southern England on 1st of October also brought localised flooding and disruption, it has continued to rain in some areas since then with hardly a pause
The persistent wet weather continued throughout October 2019 as slow-moving westerlies rolled in from the Atlantic. Some locations across Wales and northern England received a full months rain often in just a couple of hours. The heavy rain, which was falling on already very wet ground, led to flooding disruption across Wales, Shropshire, Staffordshire and Manchester. Altogether The Environment Agency has 44 flood warnings in place across the country, including five severe warnings on the River Don in South Yorkshire.