The new norm? A massive low-pressure system stretching from the East Coast of the U.S to the edge of the Russian East Coast: Misery continues as the West is battered by more storms 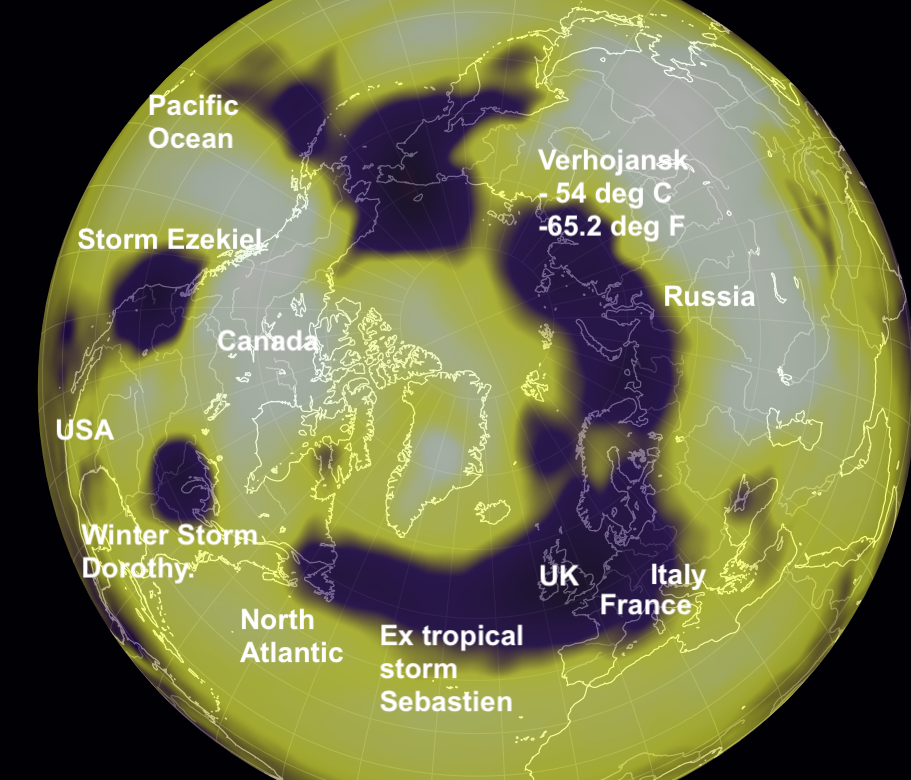 A massive low-pressure system has wrapped its self almost around the entire Northern Hemisphere, with massive amounts of rain and snow which is devastating many parts of the West and probably caused the two major quakes in the Adriatic Region in the last 24 hours. In Europe, the rains just keep on coming and show no signs of relenting.

With "historic" rain causing flooding and mudslides in both Italy and France since October along with unprecedented rainfall in the UK with devastating flooding since the end of September and parts of Greece suffering torrential rains again this weekend, we can safely say many parts of Europe are witnessing their wettest year on record. The National Oceanic and Atmospheric Administration (NOAA)  had already, by September declared 2019 the wettest year on record in the U.S.  along with record flooding in Russia this August and October, leaves one to wonder, just where is all this rain coming from?

A massive low-pressure system stretches from the U.S. Eastcoast all the way to the edge of Russia's Eastcoast. A massive "mighty" storm, named Ezekiel is smashing the Westcoast of America at the moment, with The Weather Channel claiming is as powerful as a category 2 hurricane with parts of California recording their lowest pressure ever and wind gusts over 100mph, 160 km/h and promising torrential rain and snow.

The powerful storm is moving into southern Oregon and Northern California. This storm became a "bomb cyclone" on Tuesday due to its incredibly fast rate of intensification. The storm will then move slowly through the West into late this week with snow, rain and gusty winds. Snow and wind from this storm will move into the Northern Plains and upper Midwest late this week into the weekend, see video below.

Meanwhile, on the Eastcoast of the U.S, a cyclone has intensified there and the two coastal storms are expected to merge later in the week, see video below.
Meanwhile, a snowstorm, which has been named Winter Storm Dorothy by The Weather Channel, led to large shutdowns of numerous interstates, including two of the most travelled in eastern Colorado. Denver received a massive 33 inches of snow yesterday with massive amounts of snow forecasted for the plains.