Average temperatures across the world in October 2019 was the warmest on record even though Western Europe the U.S. and Canada suffered cold and wet! 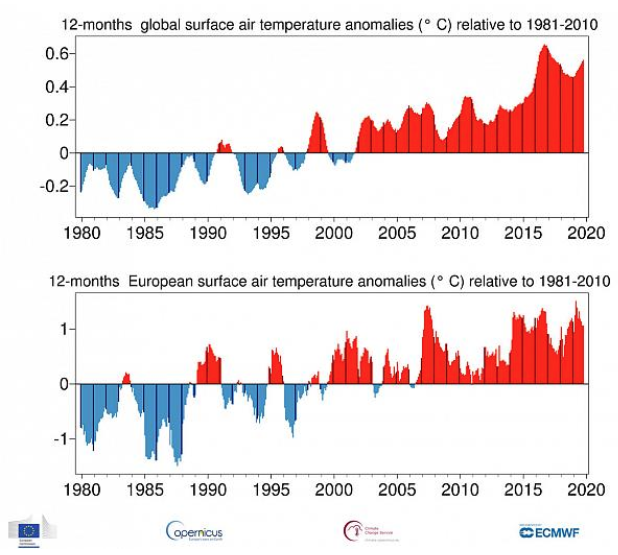 Here in Holland and other parts of Western Europe, October was one hideous washout for the whole duration as day after day torrential rain came rolling in from the Atlantic. It was the wettest month I can ever remember, although it did feel relatively warm when it was possible to venture outside.

According to NOAA, October 2019 was rather cool across the contiguous U.S., ending as the coldest October in a decade. The nation’s soggy streak also continued, with a record-wet year to date.

So it came as a surprise to me when the EU’s earth monitoring service Copernicus said on Tuesday that average temperatures across the world in October 2019 were the warmest on record for that month. October 2019 was 0.69°C warmer than the month's average from 1981-2010. In Europe, the month was 1.1°C warmer than the average of October in the same timespan. Many European countries saw above-average temperatures throughout the month with the exception of those in the north and northwest of the continent, however, Copernicus never mentioned the record-busting precipitation in Western Europe.

Temperatures were also above average in large parts of the Arctic, but the western part of the US and Canada experienced colder temperatures than usual. October 2019 also saw the area of Arctic sea ice also reach a record low. Climate scientist Zach Labe said this was consistent with the rapid change of the Arctic and related to above-average surface temperatures in the area. According to Copernicus, experts agree that the temperature datasets show a sustained period of above-average temperatures from 2001, which in my own experience I would wholeheartedly agree.

The October temperature is already 1.2°C above pre-industrial levels defined by the Intergovernmental Panel on Climate Change (IPCC), Copernicus said. This is close to the ambitious 1.5°C lower limit outlined by the Paris climate agreement which aims to keep warming between 1.5°C and 2°C. September 2019 was roughly 0.57°C degrees above average, Copernicus said last month. Indeed, this is the fifth month in a row that has broken records or been close to breaking records, the monitor said.

Are you worried about your so-called carbon footprint when driving the kids to school in the SUV, or  when boarding the annual summer vacation flight with the family to warmer climes for a couple of weeks, or maybe turning up the central heating a two or three degrees higher because you are cold, go ahead, it’s ok, stop your worrying, you cannot stop this, what is coming is going to come anyway, our demise, or, the demise of this system of things was written about thousands of years ago and we have been constantly warned and reminded of what must come and it is clearly happening before our very eyes.