How the desirable became undesirable! More than half of Southern California's largest wildfires have occurred in the last 15 years as new fires explode across the State. 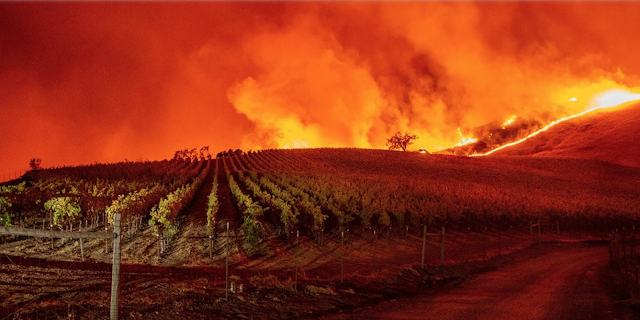 Wind gusts of 70 mph, 113 km/h have caused wildfires in Northern and Southern California to explode causing power cuts to almost a quarter of a million people with a further 50,000 ordered to evacuate.

The fires have erupted on dry terrain littered with dead trees across California and the extreme weather conditions are expected to continue well into the weekend bringing the likelihood of more power outages as power companies try to prevent electrical lines sparking more fires.

According to the LA Times, the winds swept into California on Wednesday night, an eruption of fires big and small followed: first Northern California wine country, then San Bernardino, Orange County, Marin County, Santa Clarita, Eagle Rock and the San Fernando Valley. Firefighters were able to control some while others exploded out of control.

The Kincade fire started Wednesday night and consumed more than 16,000 acres of northern Sonoma County, pushed by wind gusts higher than 70 mph and forcing the evacuation of Geyserville and other parts of the famed Alexander Valley wine region and burning about 50 structures.
“If you’re in Geyserville, leave now,” the Sonoma County Sheriff’s Office said in an advisory Thursday morning.
Pacific Gas & Electric Co. had shut off power to thousands because of dangerous wind conditions.


Since the Civil War, more than half of Southern California's largest wildfires have occurred in the last 15 years

In June 2018, Northern California was still reeling from the worst fire in history when they were blitzed by an unexpected early raging monster, the Pawnee Fire. Full story

At the end of July 2018, five people died, two of them children along with tens of thousands evacuated as the "Carr Fire" destroyed 84,000 acres (34,000 hectares) of land an area three times bigger than the city of San Francisco.
The blaze was one of about a dozen major wildfires burning across California on Saturday and of nearly 90 overall from Texas to Oregon. Full Story

In November 2018, Tens of thousands of people fled and a town of 30,000 was wiped out by a wildfire in Northern California fuelled by strong winds. Authorities claimed the Camp Fire in the north of California and the Woolsey Fire and Hill Fire in the south were fanned by strong winds.
The three major fires raging across the state of California became the most destructive wildfire in its history killing nearly 100 people along with 600 missing at one point and razing 12,000 homes to the ground, while 250,000 evacuated Malibu, the home of celebrities as flames raged over 200 square miles. Full story

Earlier this month, 100,000 people in over 20,000 homes were ordered to evacuate, including the Porter Ranch area, the backdrop for the 1982 movie "E.T." The wildfire raged out of control along the northern edge of Los Angeles Friday, prompting authorities to order tens of thousands of people from their homes as firefighters battled flames from the air and on the ground. Full story