Since the Civil War, half of Southern California's largest wildfires have occurred in the last 15 years as Thomas fire set to become the biggest ever 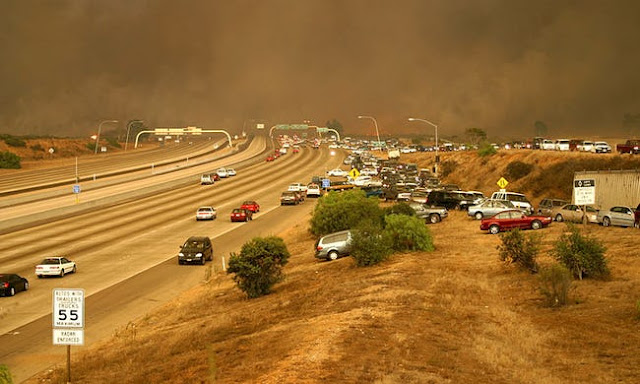 Ever since the Thomas fire erupted Dec. 4, it has steadily burned its way up the list of California's largest wildfires since the Great Depression.
That list, however, does not include what some consider to be California's largest known wildfire - the 1889 Santiago Canyon fire, which scorched 300,000 acres in Orange, Riverside and San Diego counties.
The official California Department of Forestry and Fire Protection list of the top 20 wildfires dates back only to 1932 because records before then "are less reliable," the department says.
The largest fire on the list is the 2003 Cedar fire, which burned more than 273,000 acres and killed 15 people.
By Friday morning, the Thomas fire had burned 252,500 acres in Ventura and Santa Barbara counties and was 35% contained.
However, a forecast of heavy wind gusts overnight and through the weekend threatened to push that acreage figure even higher.
Under such circumstances, the Thomas fire could ultimately grow larger than the Santiago Canyon fire, according to one expert.
"The Thomas fire is still going and it potentially could exceed that 300,000-acre estimate," said Jon Keeley, a research ecologist with the U.S. Geological Survey and an adjunct professor at UCLA.
"It could end up being the biggest fire."
Back in the 1930s, the U.S. Forest Service compiled a list of all fires in California, with records going back all the way to 1861, according to Keeley.
"These are estimates though, because going back that far, essentially all you have are newspaper reports," Keeley said.
"There's been big fires off and on ever since. ... Large fires are not unknown in California by any means.
The one thing that perhaps is different is we're getting more of them now than we did historically." Since the Civil War, half of Southern California's largest wildfires have occurred in the last 15 years, according to a paper authored by Keely.
The reason for the increase? Humans.
"Historically, if you look in the past when there are relatively few people on the landscape, a significant number of the fires were being started by lightning," Keely said.
"And lightning doesn't occur during Santa Ana wind events.
There was just a much lower probability of an ignition coinciding with Santa Ana winds.
Today, however, most fires are triggered by people.
As people increase on the landscape, we have a much greater chance that they're going to ignite fires. Perhaps by arson or more people on the landscape means more infrastructure such as power lines that could cause fires.
We think that the increased incidence of big fires is most directly tied to people, more people and more badly timed ignition."
Keely notes however that the Thomas fire is a "real anomaly," because it is tied to an unusually long Santa Ana wind event.
"Normally when we get a strong Santa Ana wind event, it lasts two or three days and then the winds die down and the fire is then contained," Keely said.
"But this fire is occurring during a Santa Ana wind event that apparently isn't even over yet. ... The longer the Santa Ana winds blow, the larger the fire grows.
That's an important characteristic of the Thomas fire."
The Santiago Canyon fire ignited under Santa Ana wind conditions and that was coupled with the fact that there were very few people on the landscape to fight that fire, Keely said.
Contemporary news reports said the fire began in a sheep herder's camp.
In a recent paper on fire and climate, researchers evaluated the correlation between the number of Santa Ana wind events each year and the area burned and found no relationship.
"We get Santa Ana winds every year.
It's just, some years, somebody ignites a fire during them, and when that happens, they tend to get really large," Keely said.
"But the really large ones, we found, were related to prior drought."
He pointed to the 2003 Cedar fire, which was preceded by more than a year of drought.
"We think that this fire, the Thomas fire, is likely very large in part not just because the Santa Ana wind event is long, but there was this very extreme drought between 2012 and 2014."
Often drought is thought of as affecting the fuel moisture of vegetation.
But researchers' analysis suggests otherwise, Keely said.
"What extreme droughts do is they cause dieback of the vegetation," he said.
"Basically a canopy of the vegetation dies and oftentimes the entire plant dies.
So you have lots of dead vegetation out on the landscape from the drought.
And when the Santa Ana winds blow embers ahead of the fire front, they'll ignite spot fires, but only if they land on dead vegetation."
The USGS is now gearing up to start a study to look at the amount of dieback in the Thomas fire prior to this fire event, he said.
"I suspect there must have been a lot of dead vegetation and that enhanced that fire," Keely said.