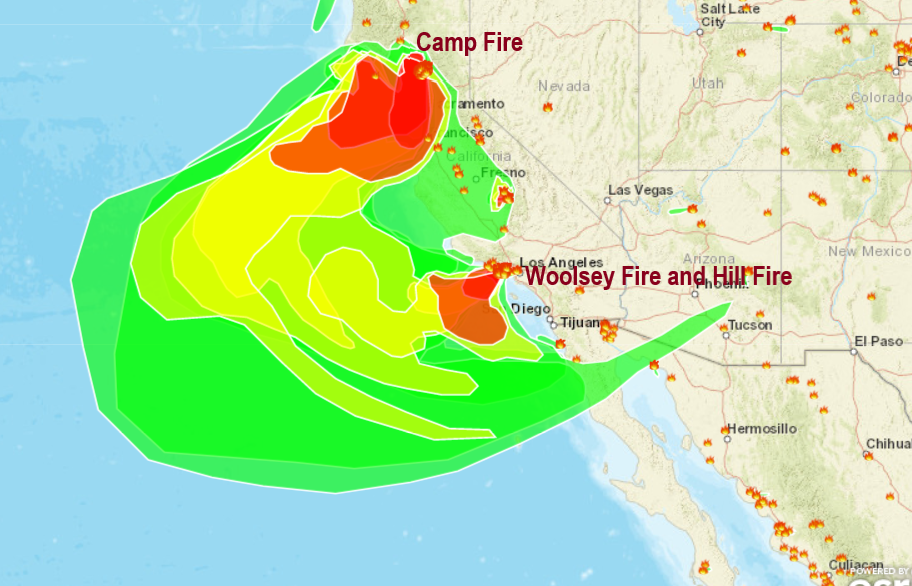 Authorities say the Camp Fire in the north and the Woolsey Fire and Hill Fire in the south are being fanned by strong winds.
The three major fires are now raging across the state as California as the most destructive wildfire in its history kills at least 9 people along with 35 missing and razes 6,500 homes to the ground, while 250,000 evacuate Malibu, the home of celebrities, flames rage over 200 square miles.
In the north, a huge wildfire destroyed the town of Paradise.
The 20,000-acre (8,100-hectare) fire north of Sacramento started in the Plumas National Forest on Thursday and quickly engulfed the town of Paradise.
More than 6,700 homes and businesses were destroyed and residents fled for their lives.
The flames moved so fast that some had to abandon their cars and escape the town on foot.
Butte County Sheriff Kory Honea told a news conference on Friday that the remains of five victims were found in or near burnt-out cars.
Three others were found outside homes and one inside a home
Among the towns under evacuation orders is Thousand Oaks, where a gunman killed 12 people in a rampage on Wednesday.
The blaze started on Thursday near Thousand Oaks, about 40 miles (64km) north-west of central Los Angeles.
Another blaze, the Hill Fire, started at about the same time, also near Thousand Oaks.
More than 250,000 people have been evacuated across the areas.
"The magnitude of the destruction of the fire is unbelievable and heartbreaking," said Mark Ghilarducci, of the California governor's office.
According to the BBC, "Fire is now burning out of control and heading into populated areas of Malibu," town officials said in a statement.
"All residents have been ordered to evacuate immediately."
According to the Daily Mail, Kim Kardashian and Kanye West's Calabasas home, Caitlyn Jenner's mansion in Malibu and even the famed Bachelor Mansion have been hit by the devastating wildfires overtaking Southern California.
The Woolsey Fire reached the Kardashian-West pad in the Hidden Hills neighbourhood on Friday afternoon, according to TMZ.
Around the same time reports emerged that Jenner's 3,500 square foot, four-bedroom pad overlooking the Malibu beach was destroyed by fierce flames from the same blaze.
Meanwhile, Lady Gaga's mansion nearby in Malibu was seen surrounded by a blanket of thick smoke as the wildfire overtook the beachside city before moving toward Oxnard.