Enough is enough! More people are reverting to civil unrest: Millions of people protests around the world against their corrupt and incompetent leaders 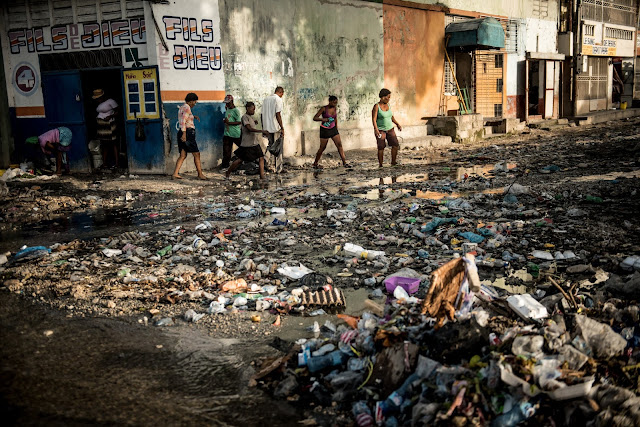 Trash piling up in Port-au-Prince, the capital, where many public services have collapsed.  Credit New York Times.

As the world groans along, creaking and buckling from the strain of 21st century demands the most ridiculous headline caught my attention over the weekend, a transgender lobby in the UK has forced sanitary towel-maker Always to ditch the female Venus logo from its products, where is this going?

While transgenders fight over sanitary towels in the UK, uprisings around the world are turning more to violence in protest of their corrupt and incompetent leaders. Hong Kong, Chile, Lebanon and Barcelona, have all suffered violent protests this weekend in prolonged attacks against their governments.

In Chile, five people died after looters set fire to a garment factory in the capital Santiago,  bringing the death toll in violent protests to at least seven. The unrest, sparked by a now-suspended metro fare hike, has widened to reflect anger over living costs and inequality. There is set to be major disruption on Monday with many banks, schools and shops expected to remain closed. 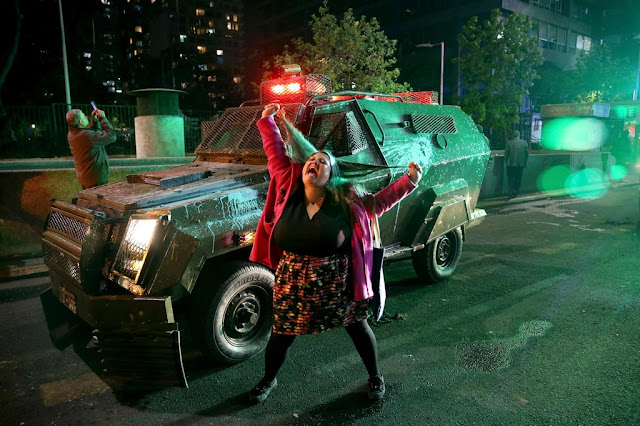 A woman shouts in front of a police truck near the Santa Lucia subway station during a protest against the rising cost of subway and bus fares, in Santiago. AP Photo

Security forces fired tear gas and chased down protesters in Beirut on Friday after tens of thousands of people across Lebanon marched to demand the demise of a political elite they accuse of looting the economy to the point of collapse. Riot police in vehicles and on foot rounded up protesters, according to Reuters witnesses. They fired rubber bullets and tear gas canisters, dispersing demonstrators in Beirut's commercial district. Dozens of people were wounded and detained.

Violent clashes escalated in Barcelona late on Friday, as radical Catalan separatists hurled rocks and fireworks at police, who responded with teargas and rubber bullets, turning the city centre into a chaotic battleground. The deterioration came on the fifth consecutive day of protests in the Catalan capital and elsewhere over a Spanish court's jailing of nine separatist leaders on sedition charges over a failed independence bid two years ago. Around half a million people rallied in Barcelona earlier on Friday, police said, in the biggest gathering since Monday's court ruling as separatists also called a general strike in the major tourist destination. But while most marchers appeared peaceful, hordes of young protesters went on the rampage near the police headquarters, igniting a huge blaze that sent plumes of black smoke into the air, as police fired teargas to disperse them, an AFP correspondent said. Other fires raged near Plaza de Catalunya at the top of the tourist hotspot Las Ramblas, where hundreds of demonstrators rallied in defiance of the police, who tried to disperse them with water cannon.

Mexico's president has defended his decision freeing drug kingpin Joaquín "El Chapo" Guzmán's son soon after his arrest this weekend. When Ovidio Guzmán López was seized at a house on a judge's warrant in the city of Culiacán, cartel gunmen fought street battles with security forces. At least eight people were killed and 16 wounded, the authorities say, with vehicles left burning in the streets. According to a BBC report, senior security officials had decided on his release, the president said at a news conference. "The officials who took this decision did well," he said. "The capture of a criminal is not worth more than people's lives."

Weeks of unrest around Haiti, coupled with rampant corruption and economic malaise, have led to soaring prices, a disintegration of public services and a galloping sense of insecurity and lawlessness. At least 30 people have been killed in the demonstrations in the past few weeks, including 15 by police officers, according to the United Nations. The small country is on the brink of collapse after Haitians say the violence and economic stagnation stemming from a clash between the president and the opposition are worse than anything they have ever experienced.

Venezuela is, as good as finished, the water system is on the verge of collapsing, a crumbling economy and the collapse of even basic state infrastructure means water comes irregularly and drinking it is an increasingly risky gamble. Venezuela’s current rate of infant mortality from diarrhoea, which is closely related to water quality, is six times higher than 15 years ago, according to the World Health Organization.

On Saturday more than a million Britons marched on the capital London after the collapse of latest Brexit referendum without a vote being posted as lawmakers in parliament voted to postpone Britain's departure from the European Union once again. A Reuters report claimed the massive crowd of protesters clogged vast stretches of central London, with thousands of people waiting to begin the march at Hyde Park. A protester claimed, "I am incensed that we are not being listened to. Nearly all the polls show that now people want to remain in the EU. We feel that we are voiceless," said Hannah Barton, 56, a cider maker from central England, who was draped in an EU flag. "This is a national disaster waiting to happen and it is going to destroy the economy."

Thousands of Italians descended on Rome for a far-right rally labelled “Italy pride”,  Saturday, evoking connotations to the “march on Rome” held on 27 October 1922 that marked the fascist dictator Benito Mussolini’s rise to power. The rally on Saturday had been in the making since Matteo Salvini, the leader of the League, was spectacularly ousted from government in late August.

The BBC reported late last week, that the US President, Donald Trump has compared the deadly conflict between Turkish forces and Kurds in north-eastern Syria to a fight between children. "Like two kids in a lot, you have got to let them fight and then you pull them apart," he told a rally in Texas. However, a disturbing letter Trump sent to the Turkish President showed only too well who the real kid is by once again showing just how inept he is at international diplomacy.  “Let’s work out a good deal!” he wrote. “You don’t want to be responsible for slaughtering thousands of people, and I don’t want to be responsible for destroying the Turkish economy and I will … Don’t be a tough guy. Don’t be a fool! I will call you later.” According to the Guardian, no one could quite believe it was real. But it was. Commentators likened it to the writing of a juvenile and suggesting Trump’s grasp of foreign policy was barely more sophisticated. Brad Simpson, an associate professor at the University of Connecticut, tweeted: “I am a historian of US foreign policy. I have read many, many letters from US presidents to foreign leaders, and I have never read a letter from the US president so unhinged, so threatening, so bizarre, so completely lacking in basic etiquette. Trump is deeply, deeply unwell.”