Yesterday was the 18th anniversary of the September 11 terror attacks and ever since that fateful date conspiracy theories have not just persisted they have taken root and grown like Japanese knotweed in someone's backyard as to who is responsible for the atrocities. However, something else happened on that terrible day which some people may not know about and was shrouded in mystery.

On Sept. 11, 2001, as terrorist attacks were unfolding in New York City, the Pentagon and near Shanksville, Pennsylvania, a hurricane was hovering off the Northeast seaboard. In one of the most chilling weather images ever taken, both Hurricane Erin, about 500 miles east-southeast of New York, and the smoke plume from the World Trade Center Twin Towers about two hours after the first tower was hit was captured in a NASA satellite image. However, Hurricane Erin that day showed uncanny characteristics coinciding with Hurricane Dorin's erratic and unprecedented stormpath over the Bahamas last week.

As the world watched in horror on the darkest day in New York's history, Hurricane Erin a category 3 storm, almost unnoticed, was heading directly toward the east coast area of New York City and the Boston area. What happened to Hurricane Erin's storm path that day is nothing short of miraculous. 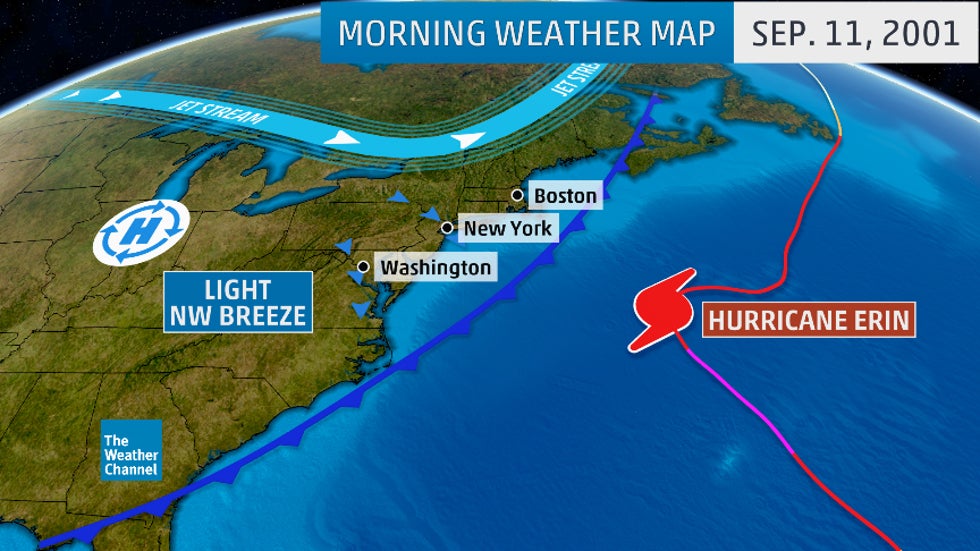 Last week, Category 5 Hurricane Dorian was heading directly for Miami and President Trump's Mar-a-Lago mansion on Palm Beach when the hurricane did something unprecedented, it parked itself over the Bahama islands for 48 hours, the storm sat almost stationary over the islands for two days, this according to experts has never happened before. NOAA's official cone showed Dorian heading straight for Miami, Trumps administration went one better, they added onto NOAA's cone an extra cone of their own, see below, showing Hurricane Dorian potentially hitting Alabama,
which later became known as Sharpiegate. 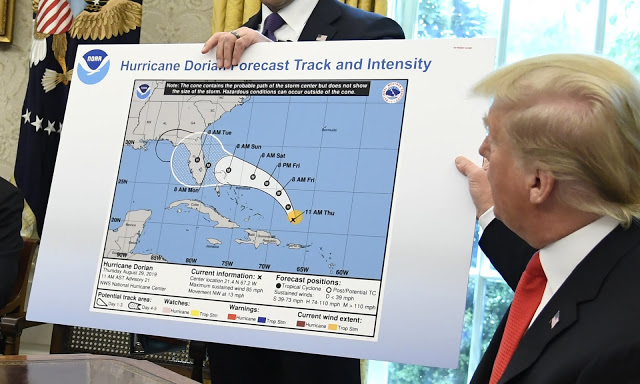 Sharpiegate, Photo the Guardian, US Administration at odds with NOAA

Hurricane Dorian's natural course after it left the Bahamas should have been a direct hit, bullseye, into the city of Miami but the hurricane suddenly changed course (you don't say!) and an almost incredible 90 deg turn from its original direction West sent it Northwards along the Florida east coast and up into the Carolinas and hugging the US East Coast and...after parking itself over the Bamahas for 48 hours earlier in the week, Hurricane Dorian now literally began racing towards Canada.
From stationary to racing away toward Canada!
On the 25th of August Dorian was announced as a tropical storm and was moving 22 km/h
direction, 280 ° - W in the Atlantic.
On the 29th August Dorian was classed as a hurricane category 1 and was moving at 20 km/h direction 320 ° - NW
On the 1st September, Hurricane Dorian is pronounced a cat 5 hurricane as it approaches Florida, it begins to slow down and is now recorded as travelling at 11 km/h, 270 ° - W
Dorian is confirmed the second-strongest Atlantic storm on record with top sustained winds of 185 mph with gusts topping 220 mph (350 KMH)
On the 3rd September, Hurricane Dorian becomes stationary over the islands of the Bahamas.
On the 4th September, Hurricane Dorian weakens to a cat 2, Dorian suddenly begins to move again 9 km/h heading north.
On the 7th September Hurricane Dorian, cat 1 is racing direction NE at 41 km/h racing toward Canada and later in the week the UK.
The Official explanation

Since hitting the Bahamas as a Category 5 storm on Sunday, Hurricane Dorian has unleashed torrential rain and winds of up to 185 mph, and while it weakened to a Category 4 on Monday, it didn't move on, crawling toward the United States at just 1 mph as if some unknown force was holding the storm off the coast of the US.
Jeff Masters, the meteorology director at Weather Underground, claimed steering currents at 18,000 feet above ground are too calm, and not pushing the hurricane in any direction. There is a high-pressure system in Bermuda that is keeping Dorian from heading north, as well as a low-pressure trough going east that is attempting to push Dorian to the north. These two systems are "fighting it out and neither is winning," Masters said. With no airflow pushing Dorian in any direction, it is "stationary," the National Hurricane Center said. "This is unprecedented." "We've never had a Category 5 stall for so long in the Atlantic hurricane record." Hurricanes need warm water to keep going, and storms that stall eventually dissipates because they keep churning up cold water from below the ocean's surface. Although the Bahamas and Gulf Stream are areas that do have deep warm water, Hurricane Dorian should still weaken a bit, even if it doesn't get moving.
Make of it what you will!