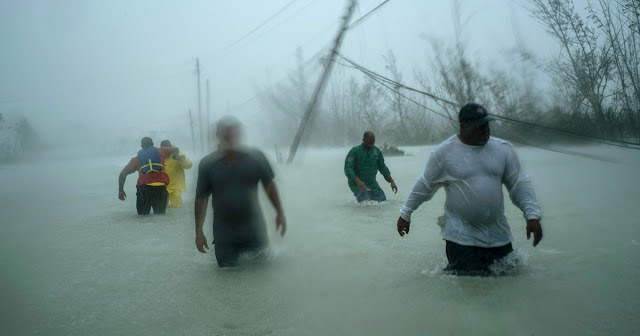 A Dutch Marine friend of mine, stationed in Willemstad, Curacao sent me a clip from the local newspaper last night, the Knipselkrant Curacao, regarding the desperate state of the Bahamas, just days after the cat 5 Hurrican Dorian destroyed the islands.


Finally, aid to the Bahamas is starting to get going. On Saturday 84 extra marines flew from the Netherlands and France to the area. Meanwhile, a British ship RFA Mounts Bay is also active and there is also help from its own naval ships. However, it is a race against time, 70,000 people need food and shelter and thousands are missing. For the time being, the death toll is 43, but it is expected that many more people died because 6,600 people were reported missing. Link

The official death toll now stands at 45, however, the actual death toll is expected to be in thousands according to the local newspaper, the Bahamas Press.


NASSAU| Observers on the ground are now telling Bahamas Press that over 3,000 residents on Grand Bahama and ABACO could be confirmed dead in the aftermath of Hurricane Dorian. The numbers are “staggering” just as the Minister of Health Dr. Duane Sands suggested last week. The government though continues to confirm the number to be a mere 45 confirmed victims in one of the deadliest disasters on record in the Bahamas. That number is far much higher.The public needs to prepare for unimaginable information about the death toll and the human suffering," Sands told local radio. Reports from survivors also point to a much higher death toll. “I’ve seen dead bodies. I’ve seen bodies of people crushed by debris, hanging out [of] windows. It’s not good,” Brian Symonette, who lived on Abaco, told Time magazine. “I’ve seen seven dead bodies under a [shipping] container.…" Kristoff Strachan, a resident of Grand Bahama, told MSNBC, "We're hearing stories of buses being filled with bodies and body bags. It’s a lot." Full story

Desperation mounts in the Bahamas as shelters turn evacuees away Meanwhile, government officials said they were helping all evacuees and considering building temporary housing, perhaps tent or container cities. “We are dealing with a disaster,” said Carl Smith, spokesman for the Bahamas’ National Emergency Management Agency. “It takes time to move through the chaos. We are responding to their needs.” The government has estimated that up to 10,000 people from the Abacos alone will need food, water and temporary housing.