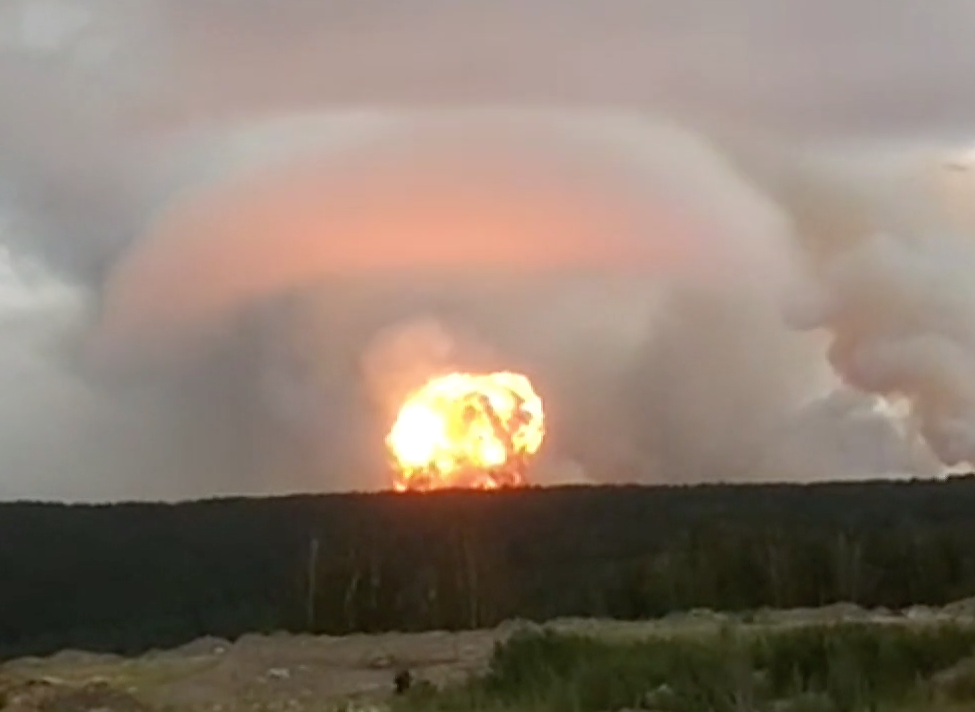 RT
In a series of events which smells suspiciously like a string of cold-war sabotage attacks, a remote Siberian military base has been rocked by more explosions just four days after huge blasts killed 2 and injured 13.
People living close to the base in Achinsk were evacuated due to exploding shells and at least five are thought to be injured.
Footage shared on social media showed a fireball illuminating the sky above the depot.
Local authorities in Krasnoyarsk said in a statement: 'A shell exploded, wounding five servicemen and damaging a vehicle during work on de-mining and eliminating the consequences of the emergency situation in Kamenka.'
The latest blast comes four days after another series of blasts at the base killed 2 and injured 13 others.

Meanwhile, 6 people have been affected by severe radiation exposure as a result of a blast at a navy missile training ground in the town of Severodvinsk, Arkhangelsk region, Russia.
They have been delivered to Moscow by air, according to the Baza Telegram channel.
The injured - Igor Berezin, Sergey Plaksin, Alexey Perepelkin, Dmitry Abalin, Alexander Manyusin, and Sergey Grishin - are en route to Burnasyan Federal Medical Biophysical Center of Federal Medical Biological Agency majoring in radiation and nuclear medicine.
It is reported with reference to sources in the Russian Defense Ministry that all the clothes of the injured and doctors, as well as chemical protection suits,  were burned.
As UNIAN reported earlier, it was initially reported that a fire broke out at a military base in Severodvinsk.

Later, Russia's Defense Ministry specified that an explosion occurred during a test of a liquid propulsion system at a military training ground in the Arkhangelsk region, the Russian Federation.
As a result of the accident, at least two specialists were reportedly killed and another six employees of the Defense Ministry and the developer were injured.
An increase in the radiation levels was recorded in the area after the explosion.
At least two people died and several others received injuries after the liquid fuel in a missile jet engine exploded during a test at the military testing area Nyonoksa on White Sea coast.
Regional news site 29.ru reports that the accident happened at 9 am Thursday.
The news-site claims that 5 people are dead and that eight of 15 injured are in serious conditions. The Ministry of Defense confirms the explosion, stating that seven people are injured, while two people died, TASS reports.
According to the Defense Ministry information, the cause of the accident was an explosion while testing a liquid propulsion system.
The explosion triggered a fire.
It is known that the site is used for testing of liquid-fueled engines of ballistic missiles for strategic nuclear-powered submarines. "...the radiation background is normal," the Ministry informs.
Rumours about a radiation leak were first reported by 29.ru, referring to emergency services saying radiation levels were three times higher than normal background.
The news portal quotes Valentin Magomedov, head of the Civil Protection Department of the administration in Severodvinsk saying that two sensors in town for a short period measured an increase in background radiation.
"From 11.50 to 12.30, the increase in radiation background began.
As of 14.00, the readings of the sensors did not exceed 0.11 mSv/h" ... "The radiation background in Severodvinsk is normal," he said.
Also, the Arkhangelsk-based news agency Region 29 reports about measuring of an increased level of radiation following the explosion.
"Sensors in Severodvinsk with an automated system for monitoring radiation responded to increased indicators," the agency reports with reference to the local emergency services.
The levels reported from Nyonoksa are three times higher than normal.
The news agency tells that also the administration of Severodvinsk informed about a slight increase in radiation, but "...,. it has now returned to normal."
It is unclear if the explosion happened on land or at sea.
The Defense Ministry says "testing ground in the Arkhangelsk region", while several of the reports from regional media refer to the accident happened onboard a barge or a ship.
The only known weapon systems with nuclear propulsion under development and testing are the Poseidon underwater drone and the Burevestnik cruise missile.