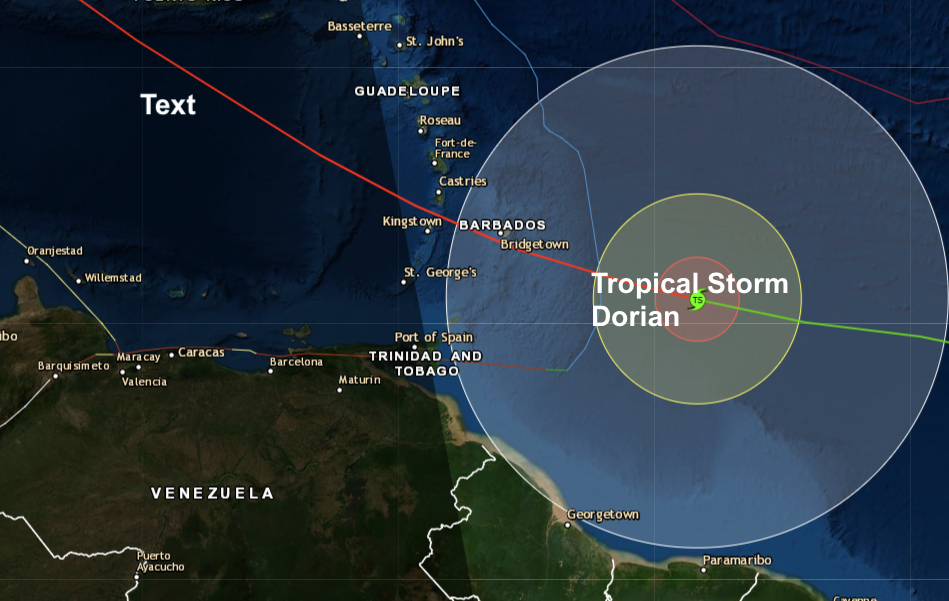 As we approach the peak of hurricane season, which usually occurs in early September, a tropical storm warning has been issued for Barbados, St. Lucia, and St. Vincent and the Grenadines. That means tropical storm conditions (39-73 mph winds) are expected there within the next 36 hours, according to the Weather Channel.
Tropical Storm Dorian is strengthening as it moves westward toward the Windward Islands where it will bring heavy rain and strong winds early this week and could reach hurricane strength by Tuesday.
Dorian is currently centred more than 200 miles east-southeast of Barbados, moving steadily west at 10 to 15 mph.
In addition, tropical storm watches are now in effect for Martinique, Grenada and Dominica. Tropical storm conditions are possible in those areas within the next 48 hours.
Dorian will move through the eastern Caribbean Sea and turn more toward the northwest during the middle portion of this week.
It's intensity forecast later this week remains highly uncertain.
Sea surface temperatures are warm ahead of the system, and upper-level winds are expected to remain weak for up to 48 hours. These factors favour intensification.
However, the mid-level atmosphere is moderately dry, and that may keep a brake on any rapid strengthening. If the storm can develop an inner core of moisture and keep it walled off from the dry air, more sustained intensification would be possible.
The latest forecast from the National Hurricane Center (NHC) calls for Dorian to be a hurricane as it approaches Hispaniola and Puerto Rico later this week.