Aftershocks in Southern California are increasing dramatically with a spike in the last 24 hours jumping to almost 2,000 quakes despite La Times claim they are decreasing 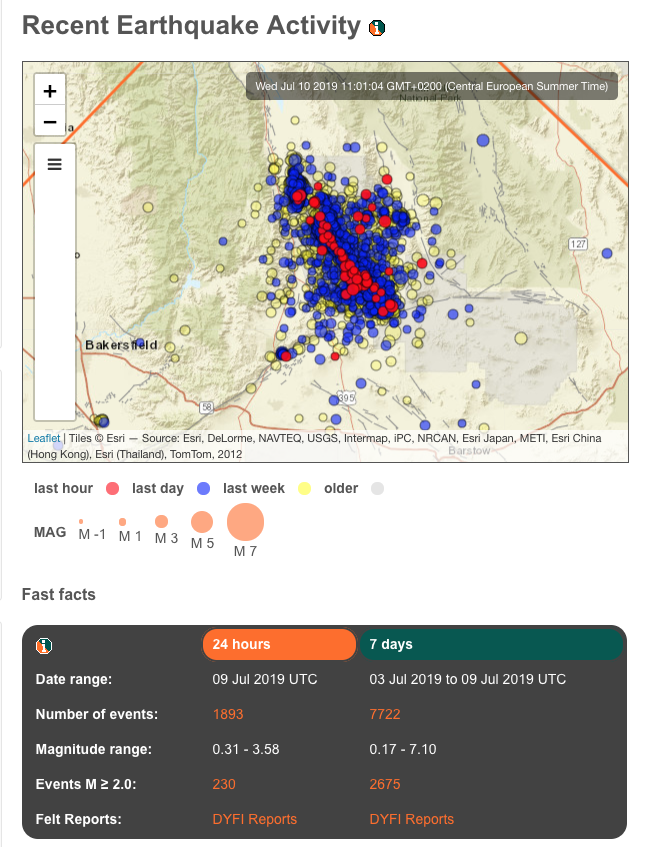 The number of aftershocks rocking Southern California after the powerful mag 7.1 is increasing dramatically, with a spike in the last 24 hours jumping to almost 2,000 quakes.
On the 9th of July, 1,400 quakes were recorded and on the 8th, 1,250 were recorded, according to USGS.

However, yesterday, the LA TIMES claimed, "aftershocks from the recent earthquakes near Ridgecrest, Calif., are decreasing in both frequency and magnitude, and seismologists say they expect the pattern to continue."
"The earthquakes on July 4 and 5 — one a magnitude 6.4 and the other a 7.1 — were the strongest to hit the area in 20 years."
"But since an initial cluster of magnitude 5 and above quakes that struck in the hours following the 7.1 temblors, the aftershocks have been subsiding in intensity and striking less often, an analysis of seismological data shows."...The new data above from Southern California Seismic Network appears to contradict the La Times report.


Seismologists have said the danger is not over yet, with more aftershocks expected this week.
A tweet from Caltech claimed the earthquake swarm has increased for the Coso volcanic field in the last 24 hours.

According to Southern California Seismic Network aftershocks are occurring over a 50 km wide area, with a cluster of activity approximately 25 km NW from the mainshock about 10 km to the SE of the Coso Geothermal Field.
As of today 10th of July, there have been nearly 8,000 aftershocks recorded in the full sequence.
This significantly underestimates the total number of aftershocks as the processing system is saturated with data and smaller events, in particular, are not yet identified.