A mystery! Animal deaths on France's farms, coincides with electromagnetic fields killing musher dogs in Alaska and causing cattle to flee in panic in Holland 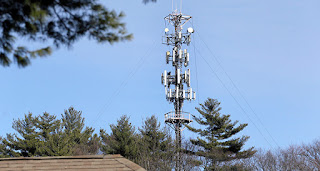 Farmers in France are claiming that electromagnetic fields created by wind farms and other electrical installations are leading to low productivity and high rates of mortality.
But scientists who’ve looked into it have failed to detect any chain of cause and effect.
The BBC went to western France to investigate.


In 2018 The Big Wobble received a similar story from a very concerned Bill Laughing-Bear from Alaska, however, Bill believed he had discovered the true problem: Bill Laughing Bear reported,
EMF is the electrical intensity or "pressure" developed by a source of electrical energy such as a battery or generator.
A device that converts other forms of energy into electrical energy (a "transducer") provides an EMF at its output.
Bill as regular readers of The Big Wobble knows, works with professional dog mushing teams in Alaska, discovered, 13 of his dogs died of different kinds of cancers over a short period of time.

Bill writes...
"These dogs were not of the same breed or family lines."
When he and a colleague started looking at the overall picture, they realized their own cognitive function had begun a downward spiral around the same time the dogs started to become ill which coincided when analogue meters were replaced with smart meters to deliver electricity to our homes.
He goes on...
"All the dogs that died of cancer were in close proximity to my smart meter."
"It dawned on me that something was wrong and I started studying EMF pollution on a “hunch.”
"Not only did I invest in the reference materials where I obtained the facts written above, but I also bought professional grade meters to start monitoring things myself."
"Doing this, I started having people feeding me information and asking me to come to test their home and work environments to see if any of the four distinct types of EMF (Electro-Magnetic Field) were affecting their environments."
A prime example: "One of the men who contacted me in Anchorage, Alaska, lived in a quadplex."
"The four smart meters for all four units were on the outside of his bedroom wall which was six inches thick."
"On that wall, there was a padded box built for his dog to sleep in and above that a padded box for his cat to sleep in."
"The first full day the meters were switched on, his pets started acting odd."
"He did not feel well himself."
"The second day both pets were extremely sick as well as he himself was."
"The third day, both pets died."
"He had to abandon his bedroom." You can find Bill's research here

In 2018, The Big Wobble reported a similar phenomenon happening to cattle in Holland: Translated from Dutch
Farmers in North Groningen are puzzled.
They regularly see acute and severe panic attacks among their dairy cattle.

The cows then run through the stable, in a panic and mortal fear.
The Oudman family from Stitswerd are now looking for publicity. "We would like to know what is going on," says Hilma Oudman.

Particular phenomenon
It is, therefore, a special phenomenon: complete couples of cows that panic from one moment to the next and run through the stable panicking and jumping on top of each other and falling down.
This has happened at least three times since October, according to the farmer's wife.

Demonic
It's not just the Oudmans.
Their neighbour, Piet van der Berg, has witnessed similar behaviour with his cattle and my brother-in-law Henk Oudman who owns a farm a few kilometres away.
"She has heard a similar story from a cattle farmer from Grijpskerk, a small town close by which is close to natural gas storage."

Sweating of fear
Moreover, that does not explain why the panic attacks have only occurred since October. "It is as if the cows can smell something," says Hilma.
"You can see that a couple reacts at the same time, they put their heads in the air, and then the panic hits.
They are terrified, they are really sweating with fear.
They may be running for a quarter of an hour, but the whole day they will still suffer.
They remain very anxious and alert. "

Pacifier crushing
The first time it happened was on an evening in October last year.
Most cows were already in the barn, but they still had free access to the pasture.
"They all ran out in a panic all at once, and they did not dare to go inside all night", says Hilma.