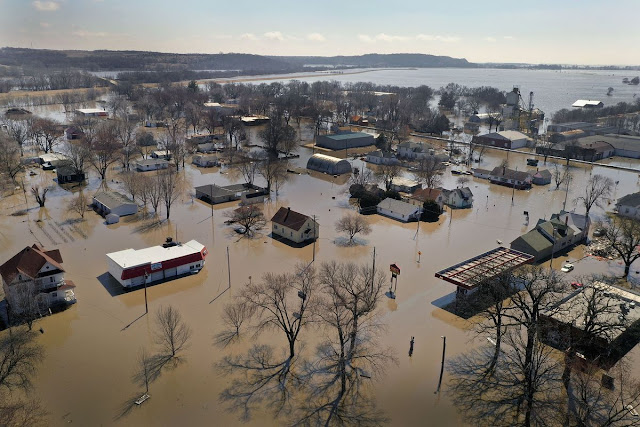 As the disastrous summer continues for many parts of the US last month has been declared the 2nd wettest May ever.
While the continental United States recorded its wettest 12-month period in recorded history this year, historic flooding and record-shattering rainfall amount landed May 2019 as the second-wettest month in the United States according to a report by Accuweather.
Precipitation across the contiguous U.S. that accumulated over the June 2018 to May 2019 12-month period shattered the previous record for any 12-month period with 37.68 inches, 7.73 inches above average.
"The previous June-May record was 35.47 inches and occurred from June 1982 to May 1983.
The previous all-time 12-month record was 36.20 inches and occurred from May 2018 to April 2019," Reppert said.
While the drought relief has been welcomed in some areas, the wet weather has resulted in disastrous flooding for many communities across the country.
"Most of the wetness has been focused from the Plains through the mid-Atlantic.
Rainfall for May 2019 was also quite high in the Southwest as well.
In fact, the wettest May on record was had in Kansas, Missouri and Nebraska," Reppert said.
NOAA reported 126 counties in the contiguous U.S. had their wettest May on record.
With 37.68 inches of accumulation, 7.73 inches above average, precipitation across the contiguous U.S. from June 2018–May 2019 shattered the previous all-time 12-month record set at the end of April.
Map of U.S. showing statewide precipitation ranks for a 12-month period of June 2018 to May 2019, the wettest on record
"Over the 12 months, the lone state that averaged below normal was Washington.
Every other state was average to record wettest, with 18 states having a record wettest June-May period," Reppert said.
Dozens of cities from the lower Mississippi Valley to the southern Atlantic Seaboard, mid-Atlantic and Ohio Valley received 125-180 per cent of their normal yearly rainfall in 2018.
For example, Washington, D.C., received 66.28 inches of rain last year, when 39.74 inches typically falls in the city in one year.
The floods have also claimed the loss of many crops and continue to affect crop planting. Flood-damaged grain has to be destroyed because of the potential for many contaminants to enter through the water.
Corn planting has been at an all-time low percentage and remains behind schedule in 17 of the 18 states monitored, according to the most recent crop progress report.