So far this year, a record 70 gray whales have been found dead and along the west coast of the US but the true figure could be as many as 700 as most die out at sea 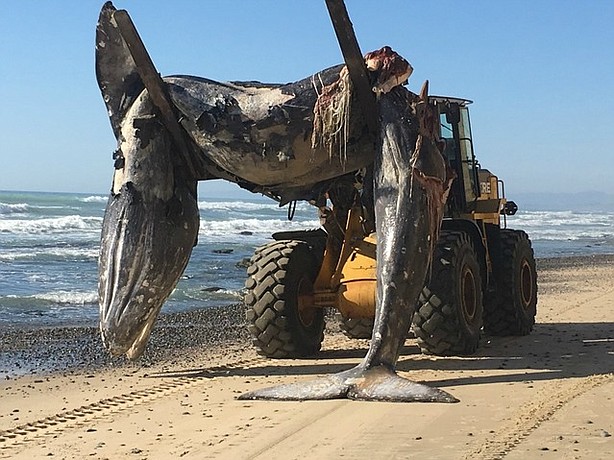 Photo kpbs.org
Alarmed by the high number of gray whales that have been washing up dead on West Coast beaches this spring, the federal government on Friday declared the troubling trend a wildlife emergency. The declaration by the National Oceanic and Atmospheric Administration - technically, the agency dubbed the deaths an "unusual mortality event" - kicks in a provision of federal law that provides funding for scientists to figure out the cause when such die-offs of marine mammals occur, from whales and dolphins in the Pacific or Atlantic to manatees off Florida.
So far this year, at least 70 gray whales have been found dead and stranded along the coasts of California, Oregon, Washington and Alaska - the most in nearly 20 years, scientists from NOAA said Friday.
In recent weeks, whales have washed up in Marin, San Francisco and San Mateo counties. On average about 35 of the giant marine mammals wash up dead on the West Coast in a year, or around three per month. Last year, 45 were found. But the average number found dead for the first five months of the year on the West Coast is 15, so this year is seeing five times the average rate. "There have been juveniles but adults as well. There have been males and females. It's been all across the board at this point," said Justin Viezbicke, NOAA's California Stranding Coordinator.
The last time this many gray whales were found dead off California, Oregon, Washington and Alaska was in 2000, when 83 had washed up by May 31. That year, 131 died. Scientists say they don't yet know why the whales are dying, although many have been found malnourished, leading to theories that warmer ocean waters from climate change might be disrupting their food supply, particularly in the Arctic.
"We are seeing lots of live gray whales in unusual locations, clearly emaciated, trying to feed," said John Calambokidis, a research biologist with the Cascadia Research Collective in Olympia, Washington. Among those unusual locations: San Francisco Bay, Los Angeles Harbor and Puget Sound, he said. Closer to shore, whales are more at risk from dying by being hit by freighters, oil tankers and other large commercial ships.
The whales that wash up dead on the shore may represent only 10 per cent of the whales that are dying in the open ocean off the West Coast. "Most whales and especially emaciated whales will tend to sink when dead," said a NOAA expert. "So the numbers that wash up represent a fraction of the total. The vast majority go unreported."
It's not just whales

According to CCN, tufted puffins, those adorable black and white birds with big orange beaks, experienced an unusual die-off in the Bering Sea in late 2016 through early 2017. Massive mortality events like this seem to be increasing, likely because of climate change, according to a new study running in PLOS ONE.
Researchers found over 350 carcasses on St. Paul Island in the Bering Sea, Alaska, between October 2016 and January 2017. They estimate anywhere from 3,150 to 8,800 birds died in that time period, but, once again this is a small percentage as thousands more will have died at sea.
Scientists think the birds died because they were starving. The adult bird bodies scientists found were severely emaciated. While there were some strong winter storms that kept the birds from foraging toward the end of the time period, they think there is a bigger factor that was keeping the birds from eating -- climate change.
That's because the puffins that live in the area typically dine on fish, but climate change has significantly disrupted the food chain. The fish eat zooplankton, but climate change has warmed the water in the area up so much that the zooplankton and the fish have started to disappear.


Common murres, little seabirds have been washing up dead by the hundreds of thousands along the shores of Alaska all the way down to San Francisco for the last four years, the reason is thought to be a lack of fish along the west coast. Earlier in 2018, a sea surface sample was the warmest it has been since records began in 1916. Researchers measured a sea surface temperature of 78.6 °F, which was 0.2 °F greater than the previous record from an unusual warming event in July 1931. These temperatures are on par with what is observed off the coast of Miami, Florida during winter months, which are known to be the warmest waters around the continental United States. Given that ocean waters in San Diego are often warmest in August, this record could again be broken later this year. Pacific Ocean temperatures recently increased during a marine heatwave in 2014- known as the "blob" - and then an El Nino event in 2015. Cod populations have nose-dived joining the list of seabirds, seals, whales, salmon, sardines, starfish, dolphins and tuna along the north-west coast of the US.
According to Hal Bernton of The Seattle Times, the Gulf of Alaska cod populations appear to have nose-dived, a collapse fishery scientists believe is linked to warm water temperatures known as “the blob” that peaked in 2015. The 2017 trawl net survey found the lowest numbers of cod on record, more than 70 per cent lower than the survey found two years earlier. The cod decline likely resulted from the blob, a huge influx of warm Pacific Ocean water that stretched — during its 2015 peak — from the Gulf of Alaska to California’s offshore waters. Residents of Plympton, a small community in Digby County, had been finding dead herring on the shore of St. Mary's Bay for more than a month, but suddenly all other marine life started washing up dead no reason for the deaths was ever found.
Another indication of the decline of our oceans is the massive increase in jellyfish due to lack of fish who feed on them. Increasing reports from around the world recently of swarms of jellyfish washing up on beaches is just another pointer to the incredible stress our oceans are suffering. At its peak, 300 tons of radioactive water was leaking daily into the Pacific from the stricken Fukushima plant with no known technology to fix it. In 2017 a study by the University of Hawaiʻi at Mānoa has revealed almost 50% of fish consumed on the islands of Hawai’i were contaminated with caesium 134 the radioactive finger-print of Fukushima. While the report declines to claim the Fukushima radioactive plume has necessarily reached the Hawaiian Islands it did reach the established fishing grounds across major migratory paths northeast of the islands… Our very own Bill Laughing Bear has been measuring and finding a huge spike of radiation in salmon and halibut along the coast and waterways of Alaska, research which has seen him taking a lot of heat and hostilities, especially from people who are commercial fishermen or into fishing tourism. Japan's largest coral reef is 90% bleached becoming the latest victim as coral reefs are dying at a record rate around the world. Warm seas around Australia's Great Barrier Reef have killed two-thirds of a 700-km (435 miles) stretch of coral in 2017, the worst die-off ever recorded on the World Heritage site.  Is there any chance of recovery? I doubt it, man is too greedy to allow our oceans to recover.