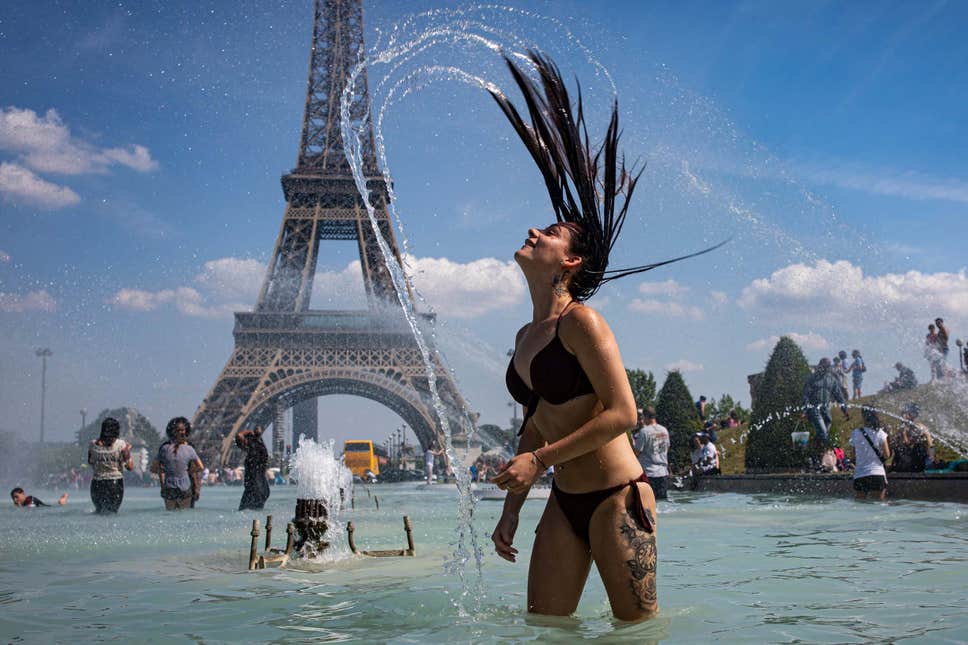 France has finally overtaken it's highest temperature ever as the continuing heatwave pushed the mercury toward 45 deg C, (113 deg F)
The new record was measured in the southern town of Carpentras.
Meteo France forecaster Etienne Kapikian says the Carpentras record of 44.3C is a "provisional maximum temperature" that will "continue to rise over 45C".
The previous record was 44.1C during a heatwave in 2003 that killed thousands.
On Thursday and Friday, schools and nurseries across France will close as the country struggles to cope with increasingly high temperatures.
Many forecasters believe the worst is yet to come.

According to France 24, a Spanish forest fire raged out of control on Thursday amid the European heatwave, devouring land as hundreds of firefighters battled through the night, local authorities said.
The blaze broke out Wednesday afternoon in Torre del Espanol in the northeastern region of Catalonia and by Thursday had destroyed more than 5,500 hectares (13,500 acres), the regional government said.
Some 350 firefighters backed by around 230 soldiers and 15 aerial tanker aircraft were at the scene of the blaze, the worst in Catalonia in 20 years.
Temperatures in Madrid today were due to reach 41 degrees Celsius (105.8 Fahrenheit) and in Zaragoza 43 degrees Celsius (109.4 degrees Fahrenheit).

According to the Daily Mirror, tomorrow could be the hottest June day for 62 years in the UK due to a 'tongue of fire' from Europe's record-breaking heatwave.
The mercury could reach as high as 35.6C on 'Scorching Saturday' - sparking the biggest beach and barbecue rush of the year.
The UK will be hotter than the Caribbean and Hawaii as the 1,500-mile wide heatwave nudging France's 45C (113F) temperature record extends to Britain.
The Met Office says there is a 50/50 chance of Saturday breaking June's 35.6C UK record, set on June 29, 1957, in London, and June 28, 1976, in Southampton.