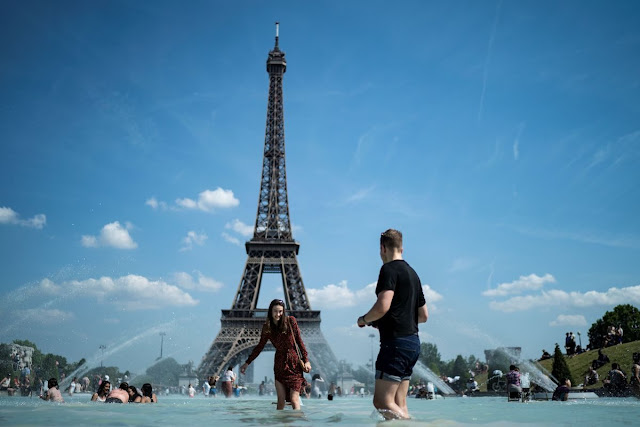 The all-time June high-temperature record was topped in Germany, the Czech Republic and Poland, yesterday.
Germany recorded its highest-ever June temperature on Wednesday, as much of continental Europe contends with a major heat wave.
The German Weather Service said the mercury hit 38.6 degrees Celsius (101.5 Fahrenheit) at 2:50 p.m. local time in Coschen, on the country's border with Poland.
The previous record stood at 38.5 Celsius (101.3 Fahrenheit), which was measured in 1947 in Buhlertal, which lies close to France.
The longevity of the previous record -- 72 years -- shows just how unusual and intense the current heat wave is in Europe.
Any sign of quick relief is not on cards either.
Climate scientists have warned that heat waves such as this one are becoming more frequent and increasingly severe because of the climate crisis.
Meteo-France, the French national weather authority, said the frequency of such events is expected to double by 2050.
Temperatures exceeding 40 Celsius (104 Fahrenheit) are forecast in a number of major cities across the continent, with meteorologists warning that higher humidity could make it feel even hotter.
A bubble of high pressure in the upper atmosphere (jet stream) is pulling hot weather from North Africa. 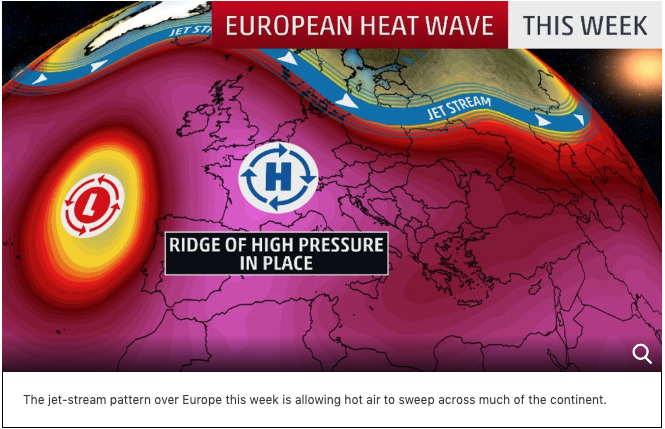 Several locations in Switzerland also set all-time record highs for any calendar month, including Säntis, Scuol and Davos, according to MeteoSwiss.

For perspective, Berlin is about the same latitude as Calgary, Canada, and Paris is a similar latitude to the border between Montana and Canada.
The heat will continue into this weekend across parts of the continent.
Paris is likely to soar into the 90s each afternoon through Saturday. Madrid, Spain, could heat up into the mid-100s from Thursday through Sunday.
In France, the highest fully reliable June temperature is 41.5 degrees Celsius (106.7 degrees Fahrenheit) on June 21, 2003, at Lezignan-Corbieres, according to Etienne Kapikian (Meteo-France). The hottest temperatures in France are expected Thursday and Friday, when a few daytime readings in southern parts of the country may approach 43 degrees Celsius (109.4 degrees Fahrenheit).
That's also not far from the all-time record high for any time of year of 44.1 degrees Celsius (111.4 degrees Fahrenheit), set on Aug. 12, 2003.