Can we grasp what is happening? More than two gigatonnes (two billion tonnes) of ice melted in Greenland in just one day as temperatures climb way above normal 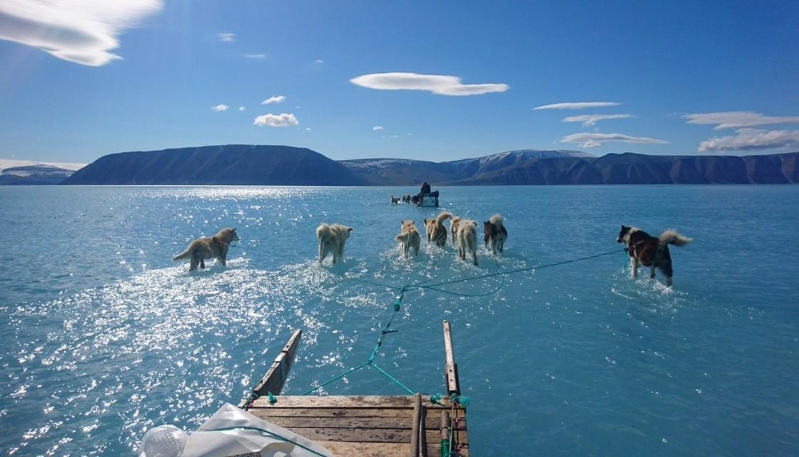 Photo Steffen Olsen Dog teams appear to be running on water!
In a sign that this year could once again set records for loss in Greenland ice, researchers have found that the island's ice sheet lost more than two gigatonnes (a gigaton is equal to one billion tonnes) of ice in just a day this week due to a widespread melting event.
The Greenland melt season started very early this season - on April 30, which is the second earliest in a record that stretches back to 1980, according to scientists from the Danish Meteorological Institute. "On average, the melt season starts around the 26th May, so we are almost a full month earlier this year" scientist Peter Langen said in a statement released by Polar Portal.
The scene could be a typical one in Greenland: a team of scientists and sledge dogs heading towards a distant mountain range under a clear blue sky - except for the water, which makes it appear as though they are travelling across the surface of an inland sea.
Danish Meteorological Institute (DMI) climate scientist Steffen Olsen took the image while retrieving equipment from a weather station in the Inglefield Fjord area, skimming through surface meltwater pooling on thick sea ice.
His colleague Rasmus Tonboe later shared the photo, saying "rapid melt and sea ice with low permeability and few cracks leave the meltwater on top".
Temperatures in north-west Greenland rose well above normal levels last week, and DMI scientist Ruth Mottram told The Guardian the team ran into "a lot of standing water on the sea ice".
"The ice here forms pretty reliably every winter and is very thick, which means that there are relatively few fractures for meltwater to drain through," she said.
"Last week saw the onset of very warm conditions in Greenland and in fact, much of the rest of the Arctic, driven by warmer air moving up from the south."
The conditions led to "a lot of melting ice, on the glaciers and ice sheet, and on the still-existing sea ice", she said.
Ordinarily, the meltwater would simply drain through cracks or fractures in the ice, but because the ice Dr Olsen and his team were crossing was thick - around 1.2 metres, he said, with few fractures - the water pooled on top, creating the dramatic image.
While Greenland's ice sheet melts annually, normally running from June to August, climate experts said it was happening early this year.
Senior researcher at the Geological Survey of Denmark and Greenland William Colgan told the BBC it was "very unusual to have this much melt so early in the season".
"It takes very rare conditions but they're becoming increasingly common," he said.
Dr Mottram told The Guardian it was too soon to say how much of a part global warming had played. Although the conditions were unusual, they were not unprecedented, she said - but added that in general, climate model simulations "expect there to be a general decline in the length of the sea ice season around Greenland".
"How fast and how much is very much dependent on how much global temperature rises," she said. The image has since gone viral on social media, with many commenting it showed how bad things could become.
"The photo documents an unusual day," Dr Olsen tweeted. "I learn now that it is even more symbolic than scientific to many. Tend to agree."