Mexico on fire! Hundreds of wildfires surrounding the outskirts of Mexico City causing a chronic air quality problem for residents

The imminent impact on the health of Mexicans continues to increase as a result of the wildfires roaring out of control in and around the country's capital over the past four days.
The Environmental Commission of the Megalopolis reported that the level of Extraordinary Atmospheric Environmental Contingency is being maintained due to dangerously high levels of ash particles and ozone in the Metropolitan Zone of the Valley of Mexico.
"The Government of Mexico continues the fight against fires. 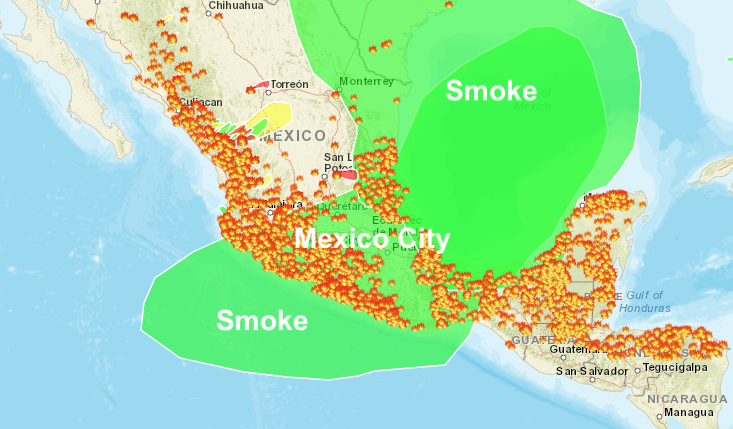 Given the impact on the population, the Environmental Commission of the Megalopolis calls to reduce emissions from all sources, prevent and give notice to the authorities about wildfires, burning of garbage, tires, pyrotechnics and other events that generate polluting emissions," the agency said in a statement released on Wednesday.
As hundreds of fires and high temperatures hit southern Mexico, the air quality is getting worse in cities like the capital, where many citizens are growing concerned.
Foggy views and smokey smells have dominated Mexico City during the past few days.
About 200 fires have directly affected the city and its outskirts, and that doesn't include fires happening in other states.
Many worry about health issues, as Mexico City government's contingency plan is not restricting vehicles and still allows children to go to school.
The plan at this point is only providing general recommendations, such as to avoid exercising outside or cooking with wood.
"This is a chronic problem," said Pablo Ramirez, an air quality campaigner for Greenpeace Mexico. He says Mexico City has been dealing with intense air pollution for decades, but the current fires make things worse.
"If we don't solve this problem, we will have air pollution problems for more time," Ramirez said. The environmentalist says Mexico City needs to improve its mobility systems and regulations to reduce air pollution.